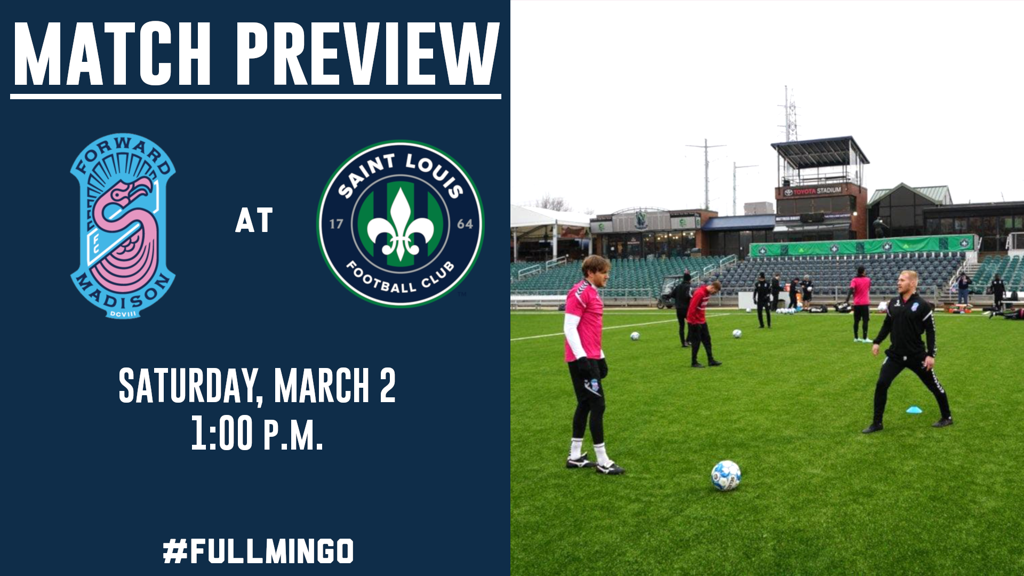 Forward Madison FC will continue its inaugural preseason schedule Saturday afternoon when it travels to Missouri to take on Saint Louis FC of the USL Championship. The match will be the first opportunity for FMFC’s partnership with Minnesota United to take root on the field, as Head Coach Daryl Shore will have four Minnesota players available for selection.

Saturday’s game will serve as a special occasion in particular for forward Brian Bement, who grew up playing in St. Louis and trains there in the offseason.

“It feels great to come back to familiar territory,” Bement said. “This will be the first time in my pro career that I get to play close to home in front of family and friends, so I plan on making the most of it.”

Forward Madison claimed victory in its first preseason game last week, beating Indy Eleven 1-0, but Shore emphasized that his team still has much work to do before the regular season begins. Saturday’s friendly will be another chance to put game tactics into use and help players gel together.

Following the Saint Louis FC friendly, FMFC will stay in the city for a game against Saint Louis University Tuesday, then come back to Madison ahead of the team’s inaugural jersey reveal on March 9.

Saint Louis FC finished 8th in the USL Championship Western Conference during the 2018 season, earning a trip to the playoffs. The team is managed by Anthony Pulis, who previously coached fellow USL League One side Orlando City B.