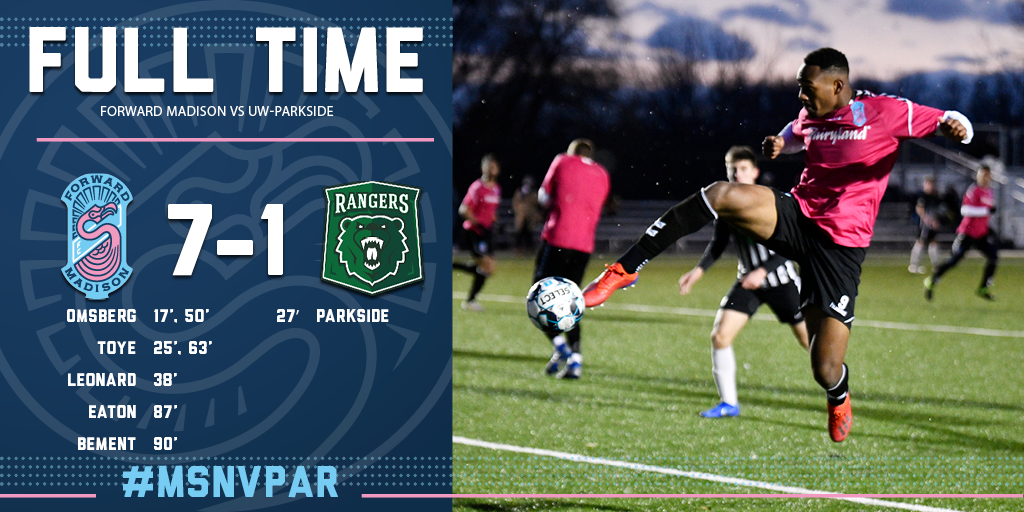 The goals came flying in for Forward Madison FC Friday night, as the Flaminigos beat UW-Parkside 7-1 at Madison College. Two Minnesota United players who have been training with FMFC, Mason Toye and Wyatt Omsberg, both scored twice to lead the rout.

The match started off slowly, with neither side coming close to gaining the upper hand. In the 17th minute, though, Jeff Michaud's corner found midfielder Eric Leonard, who volleyed the ball at goal. A slight deflection guided it into the path of Omsberg, who thrust out his chest to push the ball home.

Forward Madison struck again less than 10 minutes later through Toye, but Parkside took advantage of a lapse in concentration to pull one back in the 28th minute. At the 38 minute mark, though, the Flamingos restored their two-goal advantage, as Leonard provided arguably the highlight of the game. Following a weak clearance to the edge of the 18-yard box, the defensive midfielder sprinted forward and hammered a line drive past the fingertips of Parkside's diving goalkeeper.

FMFC held a comfortable 3-1 lead at halftime, but didn't slow down in the second period. Just minutes after play resumed, Omsberg got his second, following up on the rebound after his initial headed attempt was pushed back by the goalkeeper.

At the 63rd minute, Mason Toye tucked home his second goal of the night, knocking in from close range. Toye put on a Mingo of the Match performance for Madison, creating danger nearly every time he touched the ball.

Finally, FMFC iced its cake in the final few minutes of the game with two more goals right at the end. First, midfielder Brandon Eaton sent a rocket across the turf from outside of the 18-yard box to make it 6-1. Several minutes later, forward Brian Bement headed in after Nizigiyimana - who starred for Madison College on the same pitch he played on Friday night - saw his shot hit the bar.

Forward Madison will continue its preseason schedule next week, traveling up to the Twin Cities for training with Minnesota United. The team's next preseason match will take place on Saturday, March 30, away to Marquette University.

Without our fans, we are nothing. Thank you for the support tonight @fwdflock ! pic.twitter.com/qcuM4nU77Y