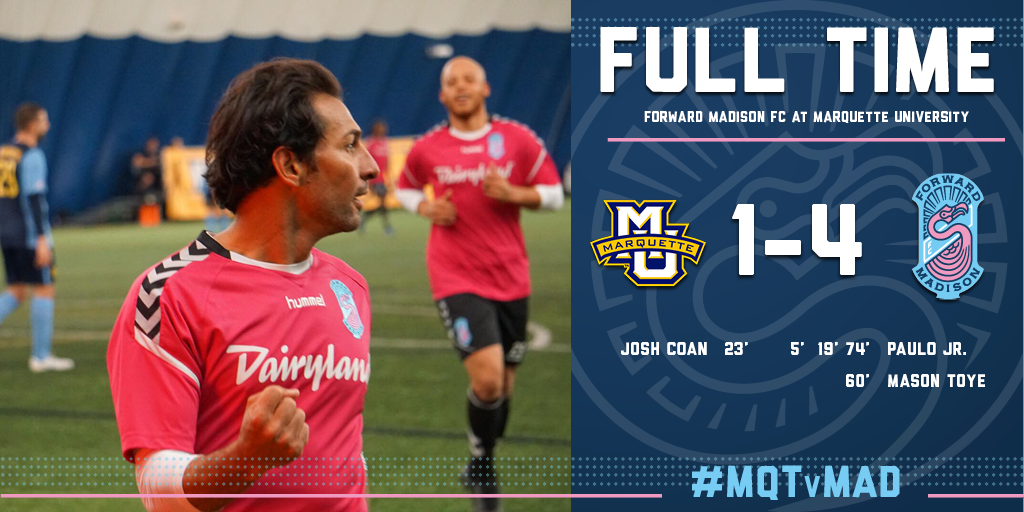 MILWAUKEE, WI - Forward Madison FC closed out its preseason schedule Saturday night with a decisive 4-1 victory over Marquette University at the Marquette Dome in Milwaukee. Winger Paulo Jr. put on a show for the travelling FMFC supporters, scoring a hat trick and earning Mingo of the Match honors.

Paulo’s first goal came in just the 5th minute, as he found space on the left-hand side off a Forward counter-attack and curled  his shot past the goalkeeper from long-range. He scored his second in similar fashion 12 minutes later, going one-on-one with the goalkeeper before a slotting a cool finish into the far-side netting.

Marquette pulled a goal back in the 23rd minute, with Josh Coan’s tidy footwork creating  enough space to drag the ball across the turf and beyond the outstretched hands of goalkeeper Ryan Coulter. The score stayed at 2-1 through halftime without any big chances on either side, although play stopped for several minutes as FMFC midfielder Josiel Núñez recuperated from a slight knock.

The second half began well for the Flamingos, and striker Mason Toye (in training with Forward Madison from Minnesota United) made it better by finishing off a superb Forward move to take the score to 3-1 at the hour mark. Paulo completed his his trick in the 74th minute, firing home from the top of the 18-yard box.

Saturday’s win proved to be a special night not only for the players, but also for the fans. The Flock, Forward Madison’s independent supporters’ association, took a bus down to the game, singing, chanting and waving flags for the whole 90 minutes. FMFC’s players showed their appreciation after the final whistle, coming over to the sideline to applaud the fans and exchange handshakes and high-fives.

The match also provided some goalkeeper intrigue, as regular starter Brian Sylvestre sat on the sideline dealing with a hand injury. With the position open, Ryan Coulter stepped in for the first half, while Dayne St. Clair (currently training with FMFC from Minnesota United) played the second.

Forward Madison finishes its preseason with three wins in total, including two in a row to end its schedule. From here, the Flamingos will travel to Tennessee for its inaugural USL League One game against Chattanooga Red Wolves on Saturday, April 6. The match will be broadcast live on ESPN+.

Without our fans, we are nothing. Thank you for the support tonight @fwdflock ! pic.twitter.com/qcuM4nU77Y