Brandon Barnes and the art of patience 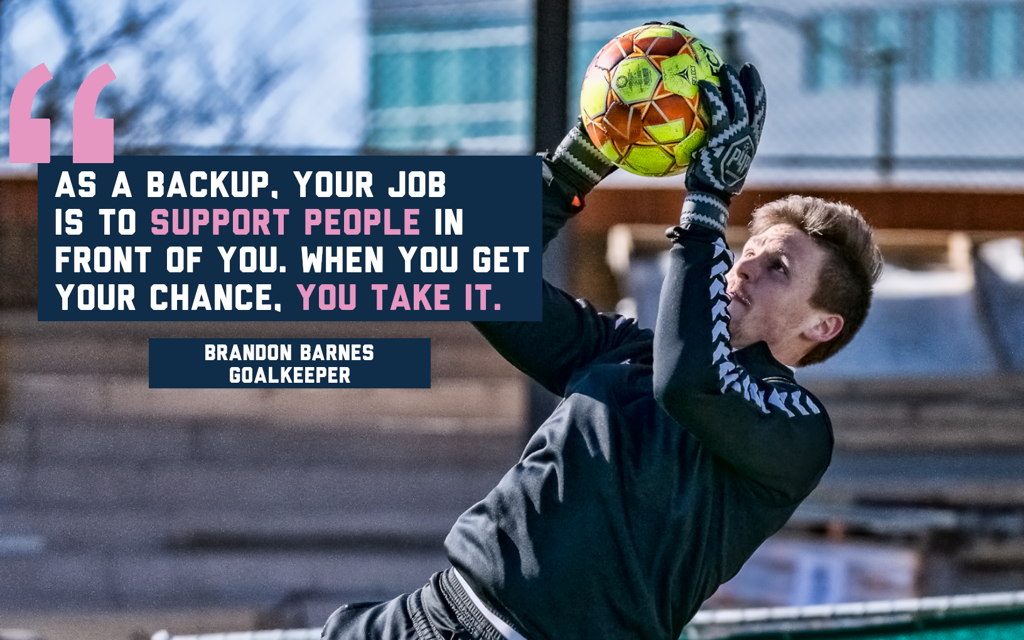 Being a backup goalkeeper can be a lonely job. Unlike with other positions on the field, goalkeepers don’t often need a game off to rest their legs, so if you aren’t the starter, you might not get to play at all; instead, you have to wait.

Brandon Barnes, Forward Madison’s latest signing, knows a thing or two about waiting. More often than not, his patience has paid off. In sixth grade, he wrote in a school assignment that he wanted to be a professional soccer player. He’d have to wait until he was 23 years old, but he’d finally get that chance.

When Barnes went off to college to play for Seton Hall in 2013, he was kept waiting, too. Despite working hard during training, he never got the opportunity to become a regular starter for his team.

“It definitely was something that tested me in my goals and aspirations,” Barnes said. In four seasons at Seton Hall, Barnes made just seven starts, eventually transferring to Bradley University in 2017.

“I think coming out of that, still having the will to play and the perseverance to continue showed just how much I really wanted it,” he said.

At Bradley, Barnes blew all expectations out of the water. After earning his spot at the start of the season, he not only held onto it, but posted statistics that placed him among the best goalkeepers in NCAA Division I: 8th in save percentage, 15th in saves per game and 17th in shutouts, to name a few.

After waiting four years for a starting job, Barnes had not only managed to accomplish one goal, but also set the foundation for another: the professional career he had always dreamed of.

“I probably had the best performance I’ve ever had,” he said. “Bradley really let me reach my potential and let me see that I could go further.”

After college, Barnes parlayed his performance into trials with several professional clubs. Before the 2018 season, he tried out with the Colorado Rapids (of Major League Soccer) and Phoenix Rising (of the USL Championship), but didn’t play well.

“There were a lot of nerves, I think,” he said.

Barnes’ final trial came with the Richmond Kickers, also of the USL Championship at the time, but now Forward Madison’s opposition in USL League One. There, on the third try, he broke through. Barnes caught the attention of Kickers goalkeeping coach Adrian Clewlow, who told him to attend his training camp and search for options.

Barnes eventually found an opportunity with the Laredo Heat, a semi-professional team that plays a summer schedule in the National Premier Soccer League. Once again, Barnes shined; the Heat won every game in its regular season, and Barnes was the main starter.

Following the summer season, Barnes’ patience paid off again. Clewlow, now in need of a goalkeeper for the Kickers, came back and offered him a spot. He signed at the beginning of August as the third-stringer, and settled into a familiar waiting game.

At some point, the Kickers’ on-loan starter Travis Worra got called back up to D.C. United, meaning Barnes became the direct backup. On Sept. 26, he finally got a chance to start his first professional game.

“It was definitely nerve wracking,” Barnes said. “I think at least for the first 15-20 minutes I was nervous in a good way. If you don’t have those butterflies, [if] you don’t have that excitement, then you’re not going to be up to the game. You need that excitement and adrenaline to get you going. But after that I settled in and it just felt like another day at the office, something I love to do, so for me it was fun to be out there, fun to compete.”

After four starts for Richmond, though, the season ended. Barnes’ shot of adrenaline had disappeared. In its wake, he was left waiting again, this time for a new club to continue his professional career. After some thinking, he decided to get in touch with Neil Hlavaty, his teammate in Richmond who had become the assistant coach at Forward Madison in January.

“When I found out that I didn’t have a place to go, the first person I called was Neil,” Barnes said. “I asked him, ‘What should I do?’ I asked him basically for some advice. When I was at Richmond he was someone I asked for advice from all the time, [so] I thought it was fitting.”

Hlavaty replied, and his response was affirmative: “Without a doubt, we can get you into the preseason,” he said.

After showing strongly for several weeks, FMFC’s coaching staff made the decision to offer Barnes a contract. With two goalkeepers already signed in former MLS player Brian Sylvestre and League of Ireland veteran Ryan Coulter, Barnes knows he isn’t coming in as the number one. This season, he says his first goal is just to work his way up to a start.

However, if there’s anyone who knows how to be a backup, how to wait and be patient, it’s Brandon Barnes.

“All of the things I’ve encountered throughout my career have given me something to learn from,” Barnes said. “I [have] learned what you need to do as a backup. A lot of times it’s not about your performance, it’s purely based off of skillset or how things get sorted out in the beginning.

“As a backup, your job is to support and encourage and push people in front of you to make them better. And then when you get your chance, you take it.”