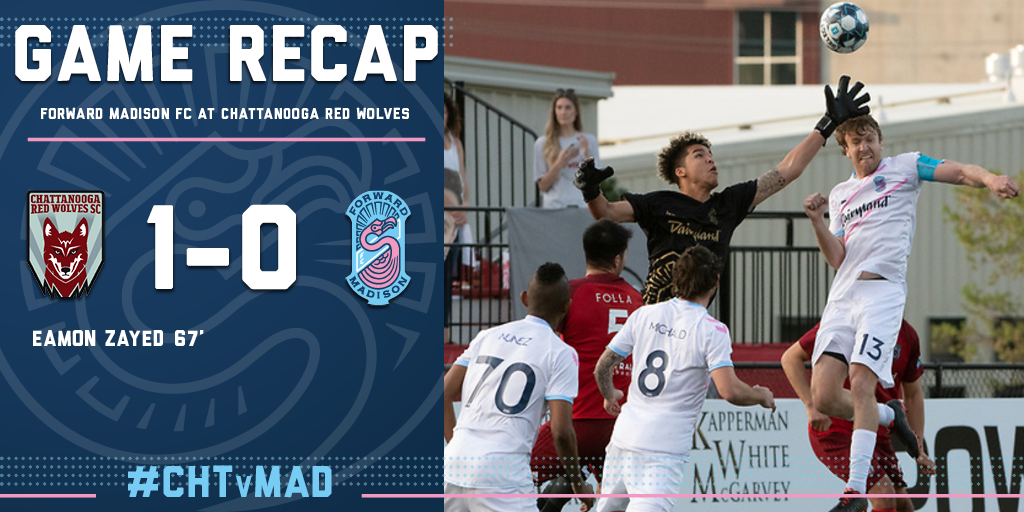 CHATTANOOGA, TN - Forward Madison FC kicked off a new era of soccer for Madison Saturday night in its inaugural USL League One game, but ultimately lost 1-0 on the road to Chattanooga Red Wolves SC. Several dozen fans made the trip down to Tennessee to watch FMFC live, while more gathered back home for watch parties in Madison.

The Flamingos held the vast majority of possession (67 percent) throughout the match and created more chances (11 shots to 6), but were ultimately undone by a neat goal from Red Wolves striker Éamon Zayed in the 67th minute. According to Head Coach Daryl Shore, his team played well, even as the end result didn’t show it.

Shore had to contend with his first challenge before the opening whistle, as left back Christian Diaz’s international player clearance failed to come through in time for kickoff. Shore was forced to shuffle his deck, moving midfielder Don Smart back into the defense.

“Our hands were tied because Christian’s ITC (International Transfer Certificate) didn’t come in, so we waited to the last minute with that,” Shore said. “We felt the best chance was to move Don back to right back because he’s comfortable playing there, [and] Carter [Manley]’s comfortable playing on the left.”

FMFC came out strong from the opening whistle. Chattanooga goalkeeper Alex Mengels had to leap to catch striker Mason Toye’s attempted chip shot in the 10th minute, then shortly thereafter midfielder Josiel Núñez came close with a free kick that sailed over the bar. Núñez put on an impressive debut performance, completing 68 passes and showing off creative ways to set up teammates, including a highlight-reel backheel flick in the 20th minute

In the 18th minute, center back Wyatt Omsberg played a cross-field pass that cut out nearly the entire Red Wolves defense, but Paulo Júnior’s shot was ultimately blocked. At the halftime whistle, the two teams remained deadlocked at 0-0.

The second half saw little action until the 67th minute, when the Red Wolves recorded their only shot on target - and only goal - of the night. Chattanooga midfielder Steven Beatttie sprung a first-time pass over the onrushing Madison defense, and Zayed, a 35-year-old veteran who has scored well over 100 goals in his career, lashed the ball into the top corner.

“[We] came out in the second half, had a good start, and just one chance for Zayed, that’s what he’s so good at, give him one chance and he can hurt you,” Shore said. “Tonight he did.”

With its inaugural game now under its belt, Forward Madison will travel down to Frisco, Tex. next Saturday in search of the team’s first-ever goal and points when they take on North Texas FC. The Flamingos will then return to Madison to open up a newly-renovated Breese Stevens Field for an exhibition match against the UW-Madison men’s soccer team on April 16.

Thank you so, so much to our fans who came down to watch our inaugural game - your support means everything to us! pic.twitter.com/hnWAVMfKjM