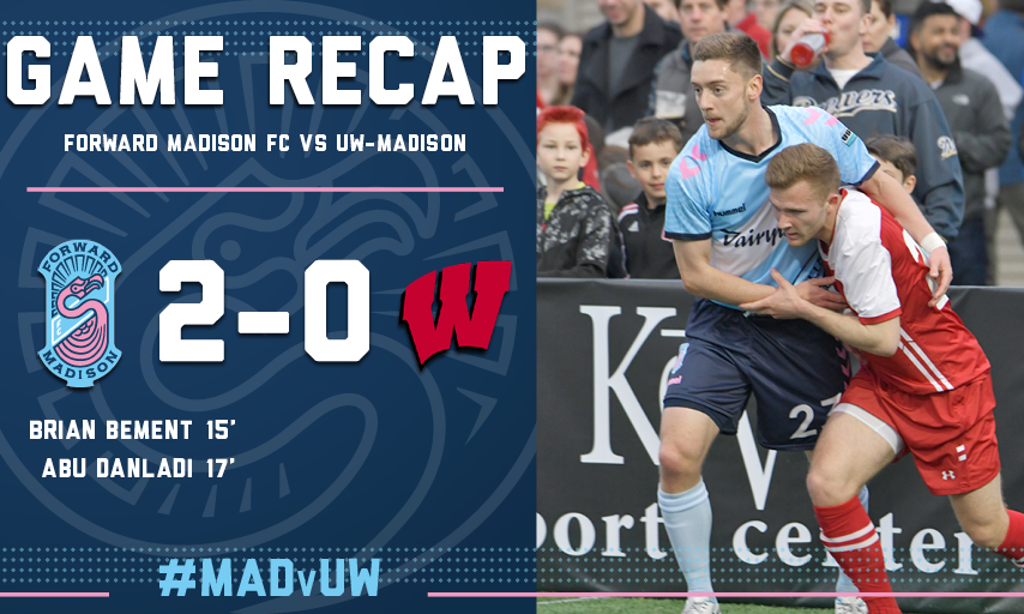 MADISON, WI - Forward Madison defender Carl Schneider, 26, has seen it all when it comes to soccer in Madison. Schneider grew up playing in Madison’s youth leagues, starred at La Follette High School, played for the Madison 56ers during summers and spent four seasons with the Wisconsin Badgers.

On Tuesday night, though, Schneider saw something new. He started in FMFC’s 2-0 exhibition win over the Wisconsin men’s soccer team, the first game the Flamingos have played a Breese Stevens Field. According to Schneider, the stadium’s atmosphere was unlike anything he had ever experienced in his home city.

“I’ve been playing at Breese my whole life and I’ve never seen it so rowdy,” Schneider said. “The Flock (FMFC’s supporter section behind the Brearly St. goal) was amazing. The songs they were singing, I had them stuck in my head at halftime.”

With the fans cheering him on, Schneider and Forward Madison cruised to victory.

FMFC nearly got on the board early on, as forward Abu Danladi (a Minnesota United player in Madison for training) struck the first shot on target, which was pushed away by Wisconsin goalkeeper Dean Cowdroy.

It didn’t take much longer to find the opening goal, which came from forward Brian Bement in the 15th minute. Bement raced down the left-hand side of the penalty area to catch up to a through ball played by winger Don Smart, then promptly smashed it past Cowdroy with his very first touch.

Danladi doubled Forward’s advantage just two minutes later, pushing a header down underneath Cowdroy from a couple of yards out.

FMFC had several more chances to score before the halftime whistle blew, coming close when defender Eric Leonard shot the ball into Cowdroy’s gloves in the 44th minute.

The Flamingos made eight substitutions at halftime, with Head Coach Daryl Shore likely looking to give players a rest ahead of his team’s Friday night USL League One game away to Orlando City B. The game slowed down in the second half, with both teams holding onto the ball for long periods of possession. In the end, the score remained the same as it had been at the break, finishing 2-0 to Forward Madison.

With its first game at Breese Stevens Field now over, FMFC will travel to Orlando in search of its first USL League One win. The club is continuing to finish renovations on Breese, which will host the Flamingos’ regular season home opener on April 27 against Greenville Triumph SC.

For Schneider and many other Madison soccer fans, though, the memories of Tuesday night won’t fade quickly.

“Playing in Madison for so long, soccer as a sport in general is always striving to get a foothold in Madison and be relevant,” Schneider said. “Playing in front of this crowd tonight, it’s really cool to see how everything’s growing and I feel like, to some extent, soccer now has a foothold and it’s established.”

Hats off to our supporters - you were incredible tonight! pic.twitter.com/gmBtY9uVBk