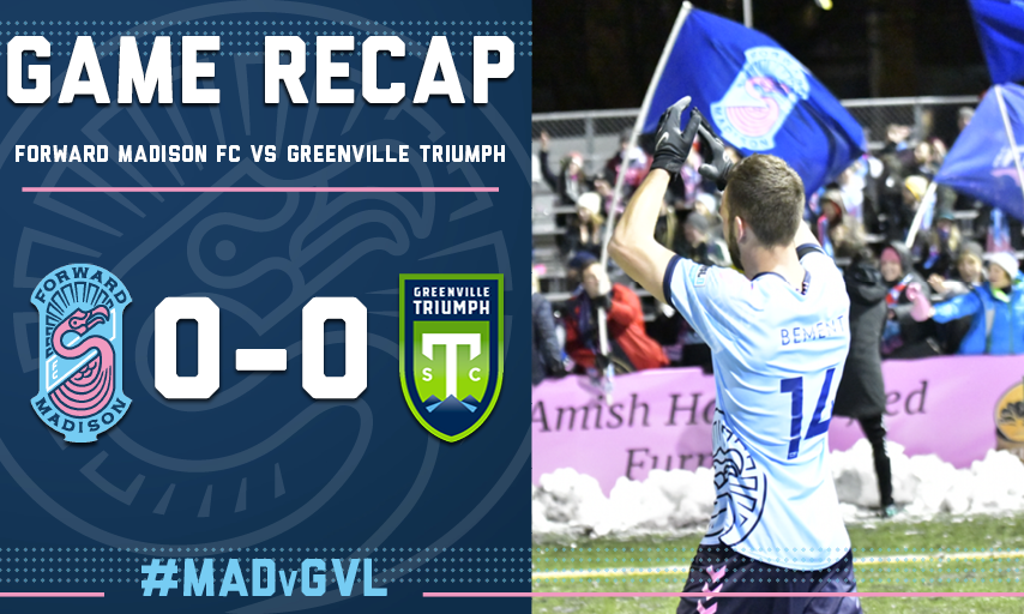 Forward Madison FC kicked off professional soccer in Madison Saturday night, drawing 0-0 with Greenville Triumph SC in front of a sold-out, standing-room-only crowd at Breese Stevens Field. Forward’s fans partied through a snowstorm, singing, chanting and cheering on the team despite adverse weather, as 4,462 people and 260 plastic flamingos looked on at a historic night for soccer in Wisconsin

According to Head Coach Daryl Shore, the nature of the occasion didn’t escape the team.

Forward Madison captain Connor Tobin, a longtime veteran of the American soccer scene, said the atmosphere Saturday night was one of the best he had ever seen.

“This place is something special, and it rivals any environment that’s in the United States,” Tobin said. “I think before you to talk about the performance, you’ve got to talk about the fans. This is about them, and I think you saw it throughout the stadium.”

Forward fans had waited nearly a year since “Madison Pro Soccer” launched last May to see their team in action, and they dutifully filed into Breese Stevens Field as soon as gates opened. As club staff cleared snow from the field, kickoff time was pushed back 30 minutes, giving supporters time to fill in the stands.

Before the match, the stadium observed a moment of silence to honor Jimmy Banks, the Wisconsin soccer legend and father of FMFC forward J.C. Banks, who passed away Friday. Wisconsin lieutenant governor Mandela Barnes and Madison mayor Satya Rhodes-Conway participated in the ceremonial first kick, and shortly thereafter the match got underway.

Greenville controlled much of the possession early on, both teams attempting to deal with the ball’s uneven bounces on wet and snowy turf. Greenville striker Jake Keegan produced the first shot of the game, firing from far out into the hands of FMFC goalkeeper Ryan Coulter in the 9th minute.

Coulter made another strong stop in the 34th minute, denying a curling effort from Christopher Bermudez, the second of four total saves he made during the game. Madison came close in the 39th minute, as right back Carter Manley looped in a cross aimed at the head of striker Mason Toye, but Greenville goalkeeper Dallas Jaye caught the ball well.

“Obviously the conditions had a big impact,” Tobin said. “It took us probably until the second half to figure out how to play in it. We’re a team that wants to pass the ball, obviously with the conditions it was a little tough to do that.”

Coming out of the locker rooms for the second half, Forward Madison looked more energized almost immediately. With the snow faltering, the Flamingos picked up the pace, launching attack after attack at Greenville’s defense.

Midfielder Josiel Núñez put a low shot on target in the 51st minute, but Jay got down to make the save. Núñez nearly produced a goal off a free kick in the 64th minute, but his shot sailed inches high of the crossbar.

In the final 15 minutes, Madison unleashed a bevy of shots, trying to find a late winning goal. Shaun Russell headed over the bar in the 80th minute; Mason Toye headed right at the goalkeeper in the 87th. The Flamingos had one last free kick hail mary in the final minute of stoppage time, but no one could find Núñez’s long ball.

Nevertheless, Forward’s fans treated its team to a rousing ovation at the final whistle, and the players returned the applause in kind, trotting over to the Flock End bleachers on the east side of Breese Stevens Field to show their appreciation.

Forward Madison will be back at home next Saturday, playing host to Toronto FC II in a game that promises, if nothing else, to be warmer than the previous one. Tickets are available here.

According to Shore, there’s no better place in USL League One to see a match.

“You know, it’s in tough conditions, it’s hard to play when it’s snowing all day, but overall [I’m] pleased with our team’s effort, pleased with our fans,” he said. “[It was an] unbelievable turnout even when the weather was was it was. [It’s the] best place to play in our league.”