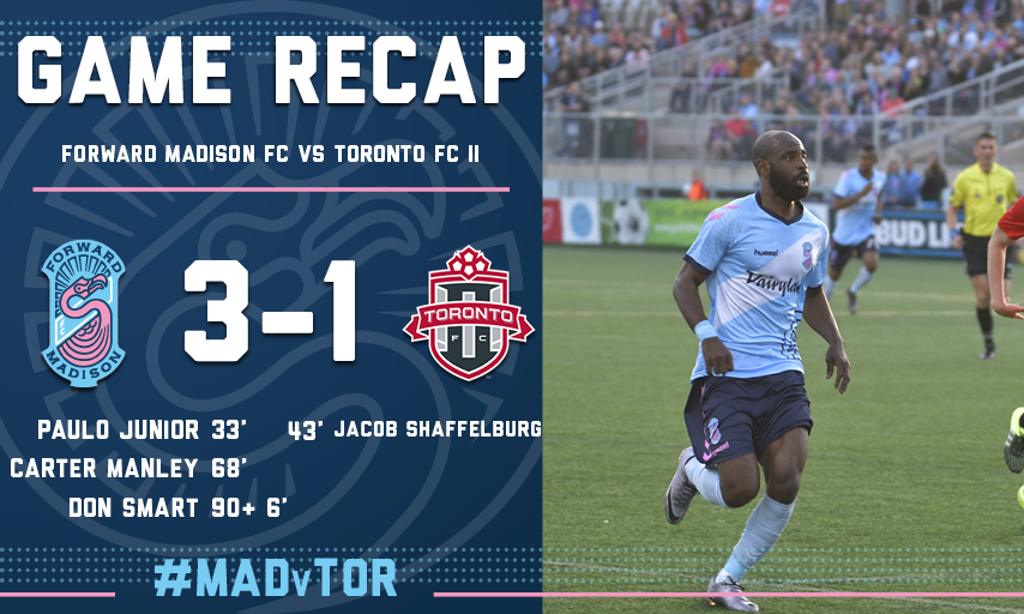 On October 24, 2018, more than six months before Forward Madison FC had even played a game, Don Smart became the first player signing in the the Flamingos’ short history. On Saturday, in front of a screaming crowd of nearly 4,000 at Breese Stevens Field, he wrote his name in the FMFC record book once again. Propelled by Smart’s goal and two assists, Forward Madison thundered its way to a 3-1 victory over Toronto FC II, the first home win in club history.

“It was a huge game,” Smart said. “We had to go out from the start, from the get-go, and the coach told us to get after them in the first ten minutes. You saw that we had them on their heels, so we had momentum, so we said, ‘let’s keep going.’”

Smart was starting fresh for the game, coming back off a one-match suspension he’d received due to a red card earned against Orlando City B two weeks ago. FMFC’s lineup also featured the return of Wyatt Omsberg from injury and the first home start for Madison native Carl Schneider.

Facing off against Toronto FC II, which had previously been undefeated in USL League One play, the Flamingos had a tall task to take on according to Head Coach Daryl Shore.

“Toronto’s a good team, they’re well coached, it’s a great club,” Shore said. “For us to be able to give them their first loss on our home turf is great.”

The game started with FMFC in control of possession, pushing ahead but failing to create chances. Jeff Michaud struck the first shot on goal in the 21st minute, but Toronto saved it and countered quickly, with Forward Madison goalkeeper Ryan Coulter making a huge one-on-one stop to keep the score level.

In the 33rd minute, it finally happened. After over 120 minutes of waiting for a Forward Madison goal at Breese Stevens Field, Smart crossed a ball from the right-hand side, and an oncoming Paulo Júnior stepped up to knock it home and make history. It probably wasn’t the prettiest goal he’d ever scored, but the Forward fans seemed to only care that it had crossed the line - they rose in jubilation, and the Flock End chanted Paulo’s name for several minutes afterwards.

Things looked good going into the end of the first half, but Toronto’s Jacob Shaffelburg found the equalizer against the run of play, dribbling into the box and placing a shot well into the bottom corner of Coulter’s net. At the half, the two teams were knotted at 1-1.

“We thought we started a lot better than we’d started in the previous games, which was one of our focuses,” Shore said after the match. “To get the goal in the first half was a key.”

In the second half, the Flamingos took flight. In the 68th minute, Paulo floated a long ball to Smart, who took it down deftly and turned in towards goal. Looking up, he cut it back for the oncoming run of defender Carter Manley, who powered a first-time finish that restored Forward Madison’s lead - the first goal of Manley’s professional career.

Flamingos captain Connor Tobin thought he’d added another in the 83rd minute, but his goal was called off for a foul in the build-up. Instead, Toronto pushed numbers forward, hoping for another equalizer. They came just feet away in the 95th minute, Coulter once again deflecting a one-on-one shot before Tobin sprinted to the goal line to stop the ball from trickling in.

Finally, with the last kick of the game, Smart finished off his Mingo of the Match performance. With Toronto still pushing up, Smart made a run behind the shoulder of the defensive line, and Paulo whipped a ball for him to tap home and seal the victory.

“I love this weather and I love the fans,” Smart said. “You can’t get any better.”

The Flamingos won’t have long to bask in their historic victory, as they travel to Milwaukee on Tuesday to take on Bavarian Soccer Club in the first round of the U.S. Open Cup. From there, Forward Madison will continue to Tennessee next Saturday, where it will look to exact revenge upon Chattanooga Red Wolves SC for its opening day loss in April. With its 3-1 win, FMFC has moved up to fifth place in the USL League One standings.

For now, though, according to Shore, Forward Madison fans can sit back and appreciate an unforgettable evening.

“[I’m] elated, just pure excitement,” Shore said. “The guys were ready to go from the start, got off on a good step, a little bit of a hiccup but the response after halftime was amazing. Playing in front of this [crowd]  is absolutely incredible.”