Flamingos advance to Round 2, will play El Paso Locomotive FC on May 15 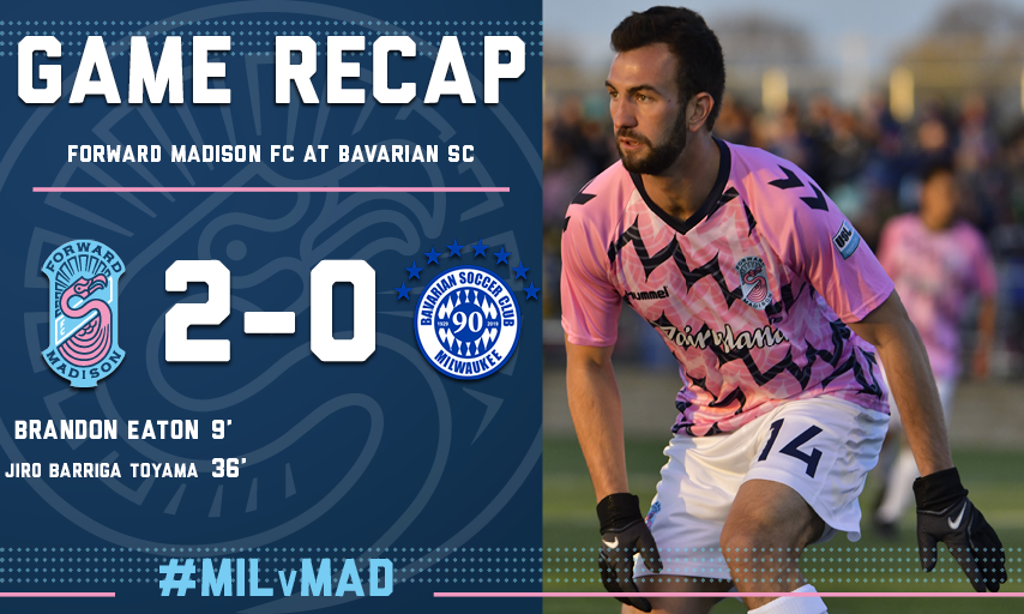 Forward Madison FC ran out winners in an all-Wisconsin U.S. Open Cup clash Tuesday night, knocking off Bavarian SC 2-0 in Milwaukee and earning a trip to Texas next Wednesday for a Round Two clash with El Paso Locomotive FC.

The game marked Forward Madison’s inaugural entry into the Open Cup, an annual tournament involving teams from every level of soccer in the United States that has taken place since 1914. The Bavarians, formed in 1929, were the oldest club in this year’s competition, and even as an amateur side, came in with plenty of high-level experience.

The Flamingos, meanwhile, made several lineup changes to give starters a rest for the midweek game. Brandon Eaton, Ally Hamis Ng’Anzi and Brian Sylvestre all made their first competitive starts for FMFC.

Within the first ten minutes of kickoff at Uihlein Soccer Park, it was Eaton who put Forward Madison on the board when he scored his first-ever professional goal. His curling shot from outside the 18-yard box caught the Bavarians goalkeeper off gaurd, taking a hop on its way into the back of the net.

Later, in the 36th minute, FMFC winger Jiro Barriga Toyama doubled the Flamingos’ advantage, racing forward on a counter-attack and connecting on a daisy-cutting cross from Don Smart. Barriga Toyama's goal was also the first of his professional career.

In the second half, the game slowed down and FMFC cruised. Eaton nearly tallied his second goal in the 72nd minute, smashing a shot off the crossbar. That moment, though, was the closest either team got to adding another goal, and the game ended with the score at 2-0 to the Flamingos.

Forward Madison, now sporting a four-match unbeaten run in all competitions, will hit the road on Saturday for a USL League One game against Chattanooga Red Wolves SC, which lost 3-0 in its Open Cup match Tuesday night. After that, FMFC will face a tough opponent in El Paso Locomotive FC during Round Two of the Open Cup on May 15. El Paso play a division above Madison and currently sit in playoff position in the USL Championship.