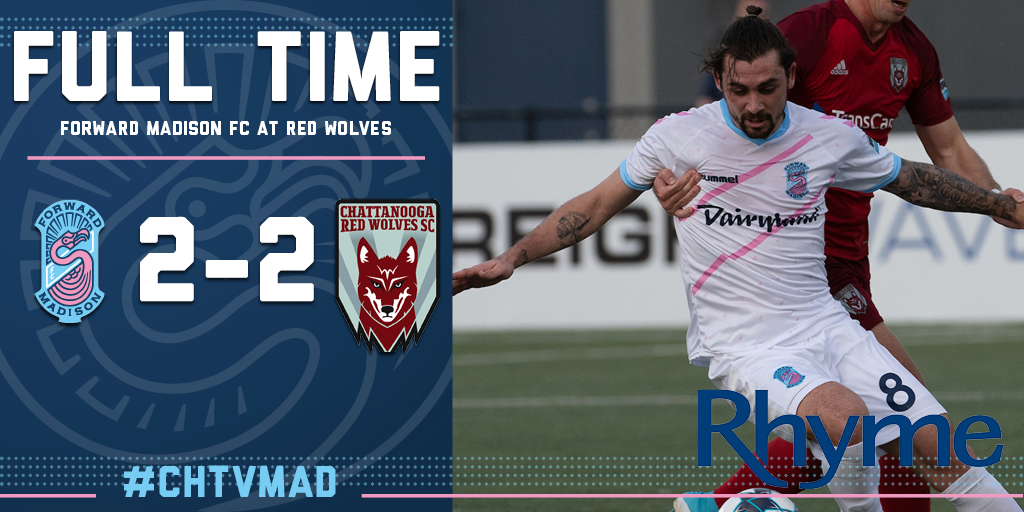 It’s now been nearly a month since Forward Madison FC last lost a game. The team continued their unbeaten streak by drawing Chattanooga Red Wolves SC 2-2 on a wet night in Chattanooga, Tennessee.

It was an uphill battle throughout most of the match, as the Flamingos gave up a goal in the second minute of the game after a defensive mix-up. Red Wolves’ Conor Doyle pounced on the loose ball and put Chattanooga in the early lead.

Things got flipped completely on their head ten minutes into the second half. Chattanooga’s goalkeeper Alex Mangels came far off his line in an attempt to clear the ball. Forward Madison’s Mason Toye was first and put in a long shot that hit the inside of the post, rebounded off the face of a Red Wolves defender and nestled itself in the back of the net. Just two minutes later, a lucky bounce found its way to the feet of Madison’s Josiel Nunez who calmly slotted it home to give Forward the lead. The lead unfortunately didn’t last long as Eamon Zayed was first to a loose ball after a Brian Sylvestre save and leveled the score.

Forward Madison FC’s inaugural season is here! The team plays at home again on May 18th vs. South Georgia Tormenta FC and then hosts German Bundesliga side Hertha Berlin on May 24thF. Fans can get tickets for all matches this season by visiting https://www.forwardmadisonfc.com/tickets.