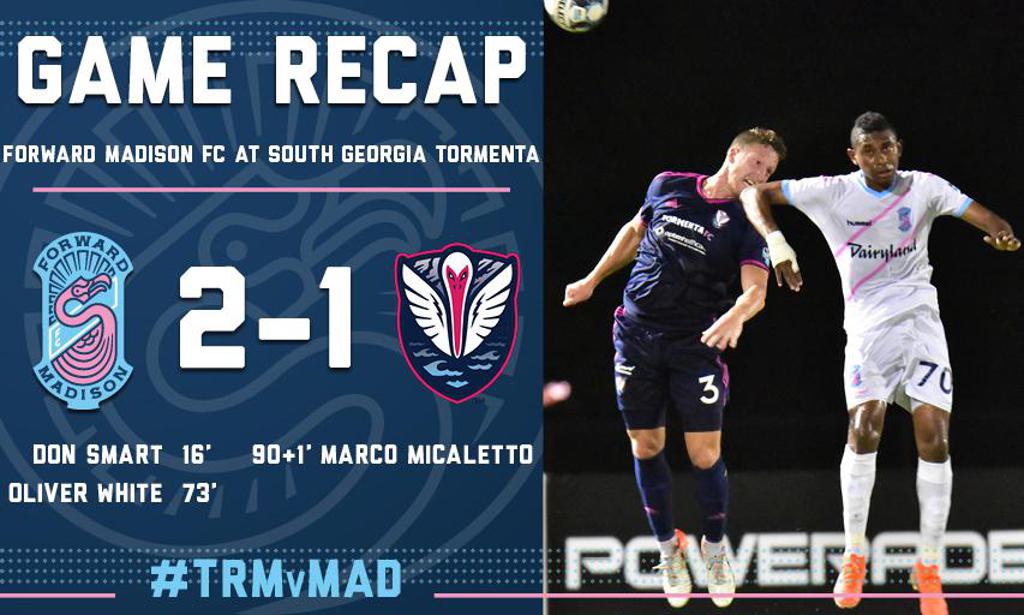 Saturday’s win extends FMFC’s unbeaten streak to four games in a row and moves the ‘Mingos within two points of a playoff place. With exactly half of its inaugural League One regular season completed, Forward Madison has now put itself in a perfect position to rise up the table.

Going into the game, the Flamingos knew they would have a tall task ahead of them, as South Georgia hadn’t allowed a single goal in its previous five matches (including a 1-0 win at Breese Stevens Field in May). Early on, it didn’t look good, as the Tormenta created several chances in the first few minutes.

In the 16th minute, though, Don Smart flipped the script. FMFC’s Jamaican sensation, who USL League One named Midseason MVP earlier this week, found the ball from midfielder Josiel Núñez after a turnover deep in Tormenta territory. Smart hit a shot across his body, angling a daisy-cutter just out of the reach of Tormenta goalkeeper Pablo Jara. Just like that, the ‘Mingos had the lead.

In the tense hour or so that followed, both teams came close to goal, but neither converted. Núñez in particular nearly found the net with a shot from distance in the 41st minute, but it ended up just wide. Forward Paulo Júnior also had a good chance, but Jara extended himself into the air to deny him in the 67th minute.

Finally, in the 73rd minute, FMFC found some breathing room. Forward Oliver White, who joined the Flamingos earlier this week on loan from USL Championship club Memphis 901 FC and had just been substituted into the game, made an immediate impact in his first Forward appearance. White found a gap between the Tormenta defense, carving out space to reach a cross from Paulo Júnior with a diving header that extended the Flamingos’ lead to 2-0.

South Georgia did pull a goal back in the end, with Marco Micaletto converting a penalty in stoppage time to deny Brian Sylvestre his first clean sheet of the season. Still, FMFC held on during the final few minutes, enough to secure a third victory in four matches.

The Flamingos will have little time to rest, heading to Michigan on Tuesday for the end of its three-game road tour as it visits Lansing Ignite FC. Tuesday’s match presents another opportunity for revenge, since the Ignite, like the Tormenta, managed to best Forward Madison at home earlier this year.