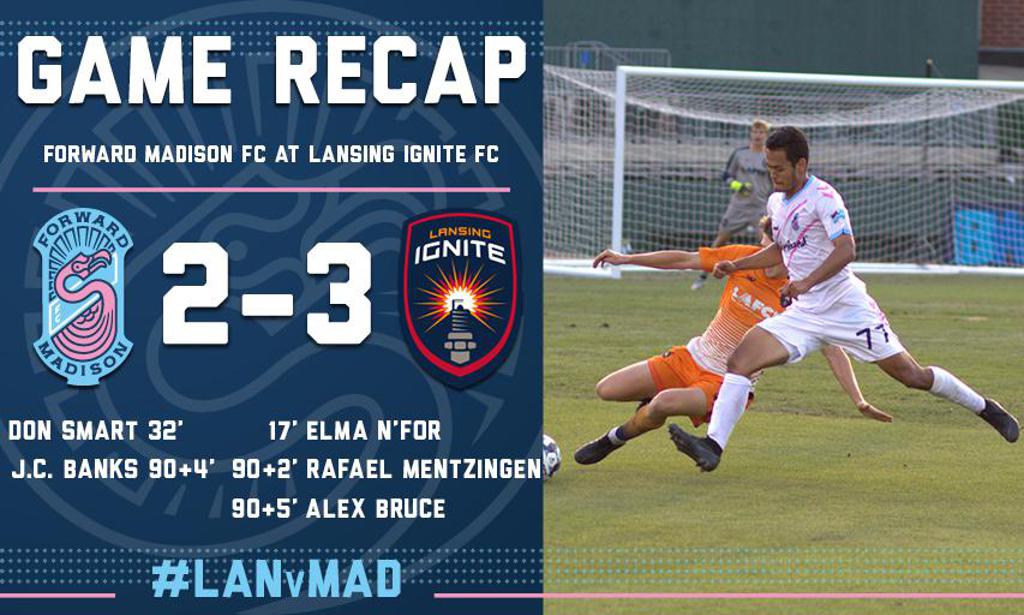 Forward Madison FC fell at the final hurdle Tuesday night, conceding a last-second goal in a 2-3 defeat to Lansing Ignite FC that ended the Flamingos' four-match unbeaten streak. FMFC will still take four points out of its longest road trip of the season, but it could have so easily been one more.

According to Head Coach Daryl Shore, the late loss will be a test of Forward Madison's character.

"It's unacceptable, but we'll now find out what kind of team we are," Shore said. "We need to bounce back on Saturday and have to now regroup and get home and get headed in the right direction."

Coming into the game, FMFC knew that a win would move the team into the USL League One playoff positions. Having just played Saturday, though, Shore opted to make seven changes to his starting lineup in order to preserve players’ legs.

As the match kicked off on unfamiliar turf, the Flamingos fell onto the back foot quickly. Lansing midfielder Elma N’For knocked a backheel shot just off the post in the 15th minute, coming inches away from taking the lead.

Just two minutes later, though, N’For would finish the job. Lansing defender Rhys Williams whipped a ball into the far side of the penalty area, and after a bounce, N’For turned himself over to perform an acrobatic bicycle kick, lifting his shot over FMFC goalkeeper Ryan Coulter to give the Ignite a 1-0 lead.

Only one goal behind, though, the ‘Mingos didn’t panic. In the 32nd minute, forward Oliver White received a pass just inside Lansing’s half of the field. Without a moment to lose, White pivoted and chipped a ball over the heads of the Ignite’s defenders, where forward Don Smart came rushing out to meet it. Smart knocked the ball down off his chest, pump faked, then cooly slotted into the lower-right corner of the net to equalize.

The goal was Smart’s sixth of the year, which puts him at fourth on the USL League One top scorers’ list. League One recently named Smart, the first-ever Forward Madison signing, its Midseason MVP.

Coming out of halftime, FMFC started to take a hold of the match, creating several decent chances. The Flamingos were impeded, however, by the early departure of midfielder Brandon Eaton, who came out of the game in the 48th minute with a non-contact injury.

With the game winding down into stoppage time, the floodgates finally opened. For both teams.

First, Lansing’s Rafael Mentzigen shot past Coulter with a left-footed finish to give the Ignite the lead again in the 92nd minute. Just two minutes later, though, FMFC’s J.C. Banks found the ball in the middle of the penalty area off a deflection and whacked it home, tying the game for a second time.

It looked like the game would end at 2-2, but in the final seconds, Lansing pushed ahead one more time, and the Flamingos, caught off guard, scrambled to get back. It didn’t happen in time, though, and the Ignite’s Alex Bruce scored in the 95th minute to hand Madison an inglorious defeat.

“To let the game get to 2-1 was unacceptable,” Shore said. “Then to actually get the goal back thanks to a gift, then you try to get out of there 2-2 with your point. And then just to give that away in a matter of 45 seconds is just - it's heartbreaking.”

Although Forward Madison is still in seventh place for now, the Flamingos are now four points out of the League One playoff places. FMFC is back at home Saturday to play the new fourth-place team, Chattanooga Red Wolves SC.