Flamingos have failed to beat Red Wolves in two attempts, but can take advantage of Breese atmosphere this weekend 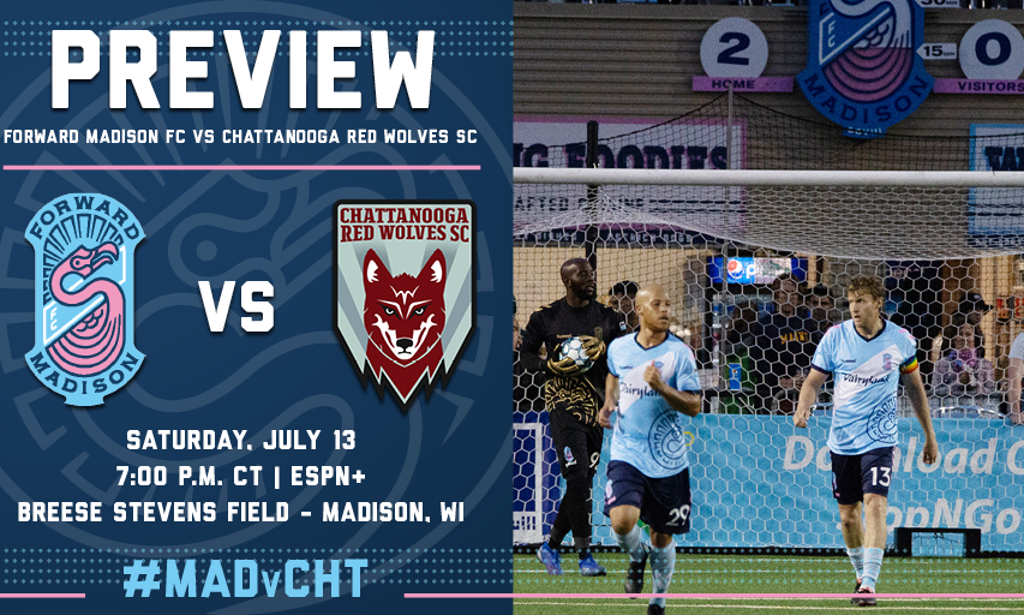 Forward Madison FC has failed to beat Chattanooga Red Wolves in two attempts this year, but on Saturday at 7 p.m., the Flamingos must defeat their Tennessean foes to keep up in the USL League One playoff race. While FMFC took four points from its longest road trip of the season, it returns home five points out of the final playoff spot, which Chattanooga currently occupies.

Although Forward Madison fell 0-1 to the Red Wolves in its inaugural game and drew 2-2 in May, the two teams haven’t yet played each other at Breese Stevens Field, where FMFC supporters lead League One in attendance. According to Head Coach Daryl Shore, those fans provide an advantage that can’t be underestimated.

“They’ve got to come play in our environment,” Shore said. “Breese Stevens Field is probably the best environment in USL League One, so they’re going to come play in front of 4,000-plus fans, and our fans are a big part of what we try to do at home.”

The Flamingos are coming off a disappointing loss on Tuesday in Michigan, having tied and then lost the game in stoppage time during a 2-3 defeat to Lansing. For Shore, Saturday’s match will be a test of how well his team can pick itself back up.

“We made mistakes, we own up to it, we let ourselves down,” Shore said. “Now we know that Saturday becomes a big game.”

FMFC made substantial lineup changes during that loss, sitting regular starters such as Connor Tobin, Christian Díaz and Paulo Júnior in an effort to keep legs fresh against the Red Wolves. The ‘Mingos will, however, be without the services of midfielder Brandon Eaton, who went down with a non-contact injury during the second half of Tuesday’s game.

Chattanooga, meanwhile, is coming off a 1-1 draw at Orlando City on Wednesday, meaning the Red Wolves have had one less day of rest. Steven Beattie, who ranks second in League One with seven goals, came off at halftime with a head injury, and it is unclear whether or not he will be ready to go on Saturday. According to Shore, the Flamingos will have to be prepared to shut down Chattanooga’s counter-attacks.

“They have a dangerous group of guys in the attack, Shore said. “If we’re not sharp defensively, if we’re not tuned in, then they can get at you and bite you, and you don’t want to be bitten.”

Tickets are still available to Saturday’s game, which Forward Madison is promoting as a celebration of summer, selling Pool Party and Summer Bro ticket packages. Following their match against Chattanooga, the Flamingos will host Leones Negros UdeG in an international exhbition match on Tuesday before returning to Breese Stevens Field to play Orlando City B on July 27.