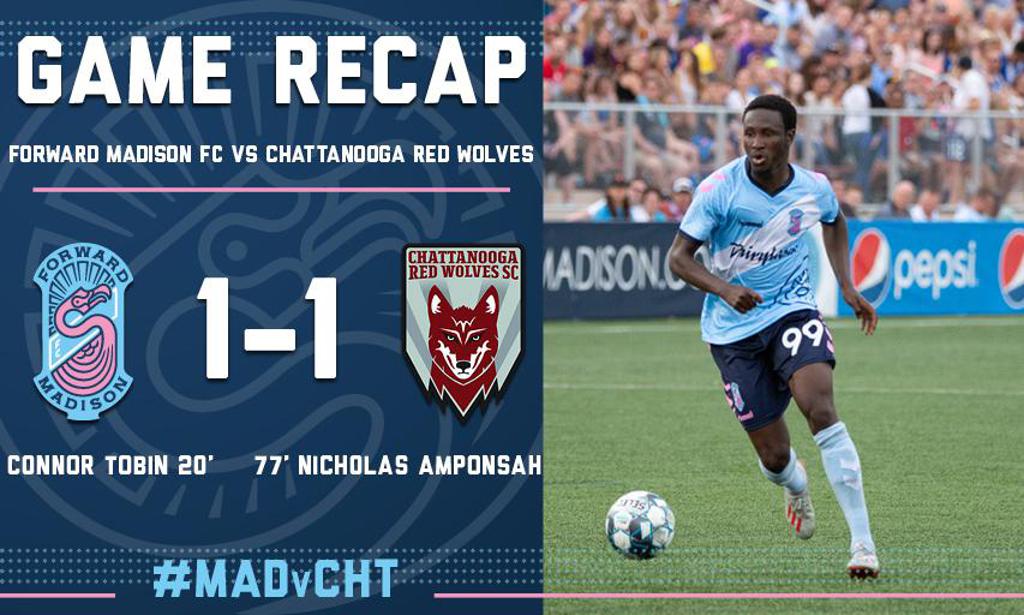 Coming off its longest road trip of the season, Forward Madison FC couldn't hold on in a 1-1 draw with Chattanooga Red Wolves SC in front of 4,442 at Breese Stevens Field on Saturday night. Despite an electric crowd and an early goal from FMFC captain Connor Tobin, the Flamingos conceded late, and left with just one point.

The Red Wolves waited until the 77th minute to put their first shot on target, and in a stroke of misfortune for FMFC, it went into the back of the net. According to Head Coach Daryl Shore, his team should have taken care of business earlier.

“We had plenty of chances in the first half to put the game away,” Shore said. “We’re up 1-0, you know, a couple more chances to get the second goal - we don’t. And then in the second half we come out and we were just not good enough.”

At the start, though, things were looking good for the Flamingos. FMFC came ready to play, applying heavy pressure to Chattanooga early on and attacking through strong runs from fullback Christian Díaz and striker Abu Danladi, the latter of whom was playing his first game in pink and blue as part of a rehab assignment from Minnesota United FC.

Eventually, the constant Forward pushes led to the opening goal. Winger Danny Tenorio, starting his first game at home, fed Tobin off a corner kick in the 20th minute, and Forward Madison’s captain climbed over the defense to head the ball into the bottom corner.

The rest of the first half progressed in similar fashion, with the Red Wolves finding few answers for a blazing FMFC attack.

The second half, however, told a different story, as Chattanooga began to control possession and create chances. Although the Flamingo defense held strong well past the hour mark, it was  midfielder Nicholas Amponsah who found space following a free kick in the 77th minute, allowing him to put an equalizing goal past Dayne St. Clair.

Although the ‘Mingos have now gone three straight without a loss at home, the end result went down as a disappointment for Shore, who labeled it as “points dropped.”

“This was a game where we needed to get the full three points,” Shore said. “It’s not over by any means, but this was a game now where, (with) our home games, we’ve got to get full points.”

Up next, Forward Madison will look ahead to its international exhibition against Leones Negros UdeG on Tuesday, July 16 at Breese Stevens Field. Legendary Mexican forward Omar Bravo is set to make a special appearance as a player in the match. Following Tuesday’s game, FMFC will have a rare weekend off before hosting Orlando City B on July 27.