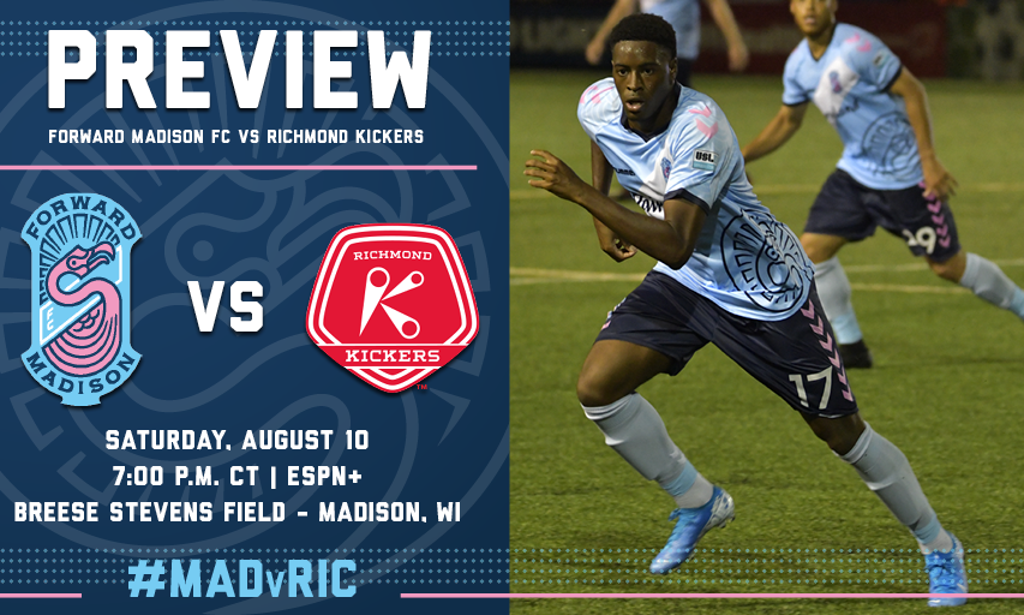 Forward Madison FC is looking to make it a club record four wins in a row as it hosts Richmond Kickers on Saturday at 7 p.m. at Breese Stevens Field. The Flamingos are as hot as they’ve been all year, and with nine USL League One games left, can now aim up the table towards one of the top two places and a home playoff game.

Speaking on Let Me Be Forward, Head Coach Daryl Shore said the ‘Mingos are ready to kick into high gear as they reach the final stretch of their inaugural season.

“This is the time of the season where it’s not about our opponent, it’s about us,” Shore said. “If we play the way we’re capable of playing, then we feel that it’s going to be hard for teams to beat us, especially coming into our stadium and playing in front of our home fans.”

The Flamingos are heading into the match with a good level of confidence, having rocketed up the League One standings - from eighth to fourth in two weeks - on the back of consecutive wins against Orlando, Toronto and Tucson. FMFC’s defense has been particularly strong, earning two clean sheets in those games and tripling its regular season total.

Forward Madison hasn’t played Richmond yet, but some players have been looking forward to the two teams’ first meeting for the whole season. Assistant Coach Neil Hlavaty played for the Kickers last year, and helped bring teammates Brandon Barnes, Brandon Eaton and Shaun Russell to FMFC. Although Barnes has yet to make a regular season appearance and Eaton is still around two weeks away from returning from injury, Russell may be a prime candidate to see playing time against his former club.

In the Richmond Kickers, the Flamingos have the honor of hosting one of the most historic professional teams currently active in American soccer. The Kickers have existed since 1993 - even before Major League Soccer formed - and won the U.S. Open Cup in 1995.

The current Kickers team, which played in the USL Championship last year, has not done well on the pitch this season. Richmond is just one place above bottom in USL League One, and has scored the fewest goals (14 in 17 matches) of any team.

Still, FMFC risk running into Richmond at the wrong time; the Kickers have won their last two games, and had the last weekend off to rest. Midfielder Joe Gallardo leads the team with four goals, and ex-New York City FC goalkeeper Akira Fitzgerald is returning from a red card suspension.

Shore, who USL League One named its Coach of the Month for July, said his team can’t underestimate Richmond.

“They’re capable of beating teams,” he said. “The Richmond Kickers are a storied club, so they have a lot of pride and they play hard every game. This is a game where, if we don’t come out and really set the tone from the opening whistle, this is a game that won’t be easy for us.

Forward Madison is promoting the game with “Bowl Mingo” bowling shirts to celebrate National Bowling day. The Flamingos are on the road against Greenville Triumph next weekend, but return home on Aug. 24 to play Richmond a second time.