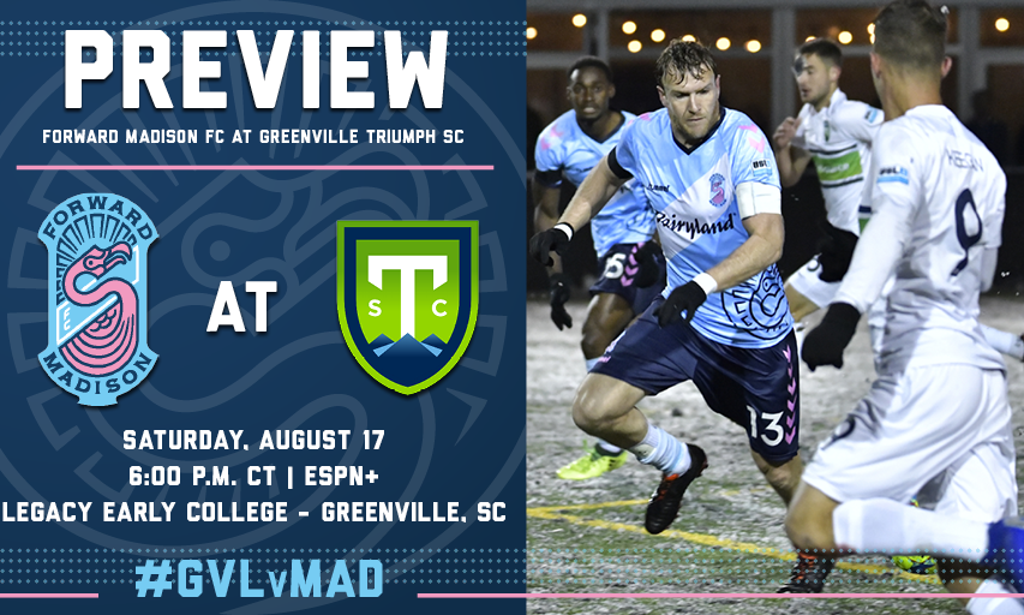 Forward Madison FC is pinning its playoff hopes on slowing down the hottest team in USL League One when it travels to Greenville Triumph SC on Saturday (6 p.m.; ESPN+). The Flamingos have just eight games left to earn a place in the inaugural USL League One playoffs, but are about to come up against a team that has lost just one game since June.

With FMFC sitting two points out of fourth place after a home loss to Richmond last week, it must now try to make up those lost points on the road. Speaking on Let Me Be Forward, Head Coach Daryl Shore said that with teams so close in the standings, three points could be crucial.

“If we go to Greenville and get a win and Tormenta and Chattanooga don’t get results, we’re in third place and everybody’s like, ‘Woah, they’re back in it,’” Shore said. “It’s really going to come down to the last few games of the season.”

The Flamingos had been on fire up until last weekend, having won three league games on the bounce for the first time ever. Even in its 0-1 loss to Richmond last Saturday, FMFC out-shot its opposition 11-4 and achieved its fifth consecutive game with one goal or fewer conceded.

At this point, it’s all about recovering mentally. Forward Madison has won only three of its 10 road away games this season, and in the Triumph, it faces an opponent that has shown no signs of slowing down recently.

Greenville are unquestionably the hottest team in USL League One at the moment. They’ve won their past three matches, lost only one of their last seven and have now climbed to fifth place - one above Forward Madison. Striker Jake Keegan in particular has been on a roll, and is now tied for the league lead with nine goals.

The Flamingos will also have to contend with the Triumph’s defense, which has conceded a league-lowest 14 goals in 19 games. Goalkeeper Dallas Jaye, recently called up to the Guam national team, has the joint-most clean sheets in League One.

“Right now they’re playing with a lot of confidence, so now they’re the team that’s been in good form and on a good run,” Shore said. “We’ve got to make it hard for them.”

FMFC and Greenville have met once before, drawing 0-0 during the ‘Mingos’ snow-laden home opener in April. Although that game was unforgettable for Forward fans, they’ll certainly be hoping for a better result this time around.

“I don’t think they’ve played a team that attacks quite the way we do,” Shore said. “We’ve got to figure out how we’re going to break them down and what areas of the field we’re going to attack.”

After its game in Greenville, Forward Madison will return home next Saturday, Aug. 24, to host the Richmond Kickers, kicking off a three-match stretch at Breese Stevens Field.