Flamingos win 1-0 over Richmond Kickers, bring joy to away supporters 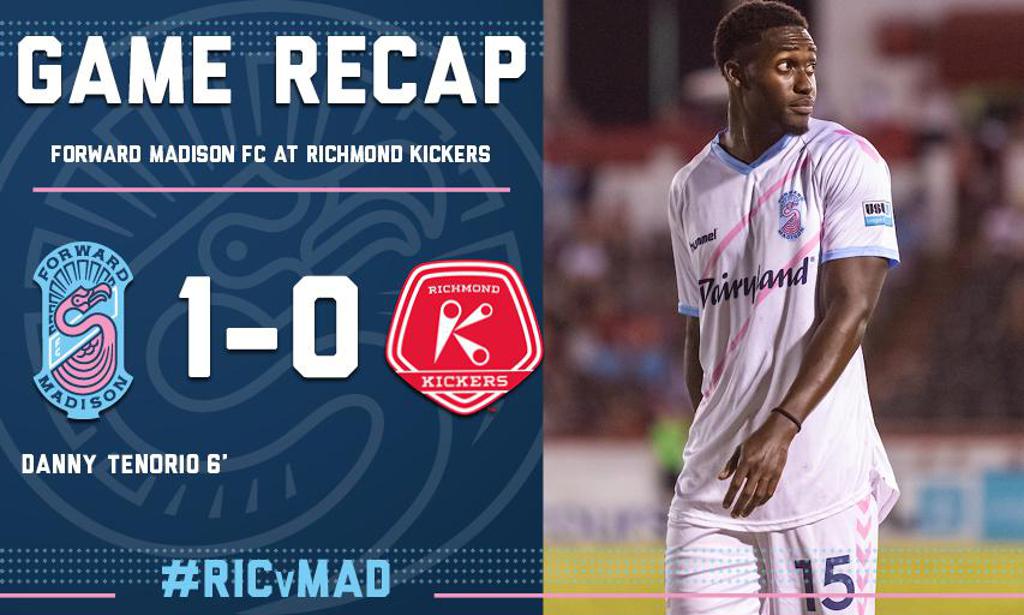 Forward Madison FC walked away with a crucial victory in front of a huge section of traveling supporters Saturday night. The Flamingos beat the Richmond Kickers 1-0 on the road, cheered on by well over 50 Forward fans, who were there as part of the team’s “Irruption” Tour.

FMFC’s fans, some of whom had traveled across the country on a mini-bus carrying a keg of Spotted Cow, stayed in full throat throughout the game to will the ‘Mingos to a fourth clean sheet in six matches.

Striker Danny Tenorio scored the game’s only goal in the 6th minute when he split Richmond’s defenders to find space in the middle of the 18-yard box. After creating room, the Ecuadorian received a clean pass from midfielder Josiel Núñez and had enough time to pick his spot past goalkeeper Akira Fitzgerald.

The Flamingos put two more chances near the net at the end of the first half, with Paulo Júnior’s 40th minute shot stopped by  Fitzgerald and Tenorio’s 41st minute shot sailing over the crossbar.

Forward tightened up during the second half, focusing on defense as the team tried to hang onto its lead. The Kickers’ Joe Gallardo forced a save from FMFC’s Brian Sylvestre with a 50th minute shot, but ninth-place Richmond struggled to create in the closing stages.

The Flamingos brought on their two ex-Kickers late in the game, giving substitute appearances to defender Shaun Russell and midfielder Brandon Eaton. For Eaton, the moment was extra special, as Saturday’s game marked his first match since coming off with a knee injury on June 1 in Lansing.

With other results going Forward’s way around the league Saturday, Madison’s team now sits in the fourth and final USL League One playoff spot with a three-point cushion. There are only three matches left for the Flamingos in the League One regular season.

Forward Madison will return home on Tuesday for a special exhibition game against the Milwaukee Torrent at 7 p.m. at Breese Stevens Field.