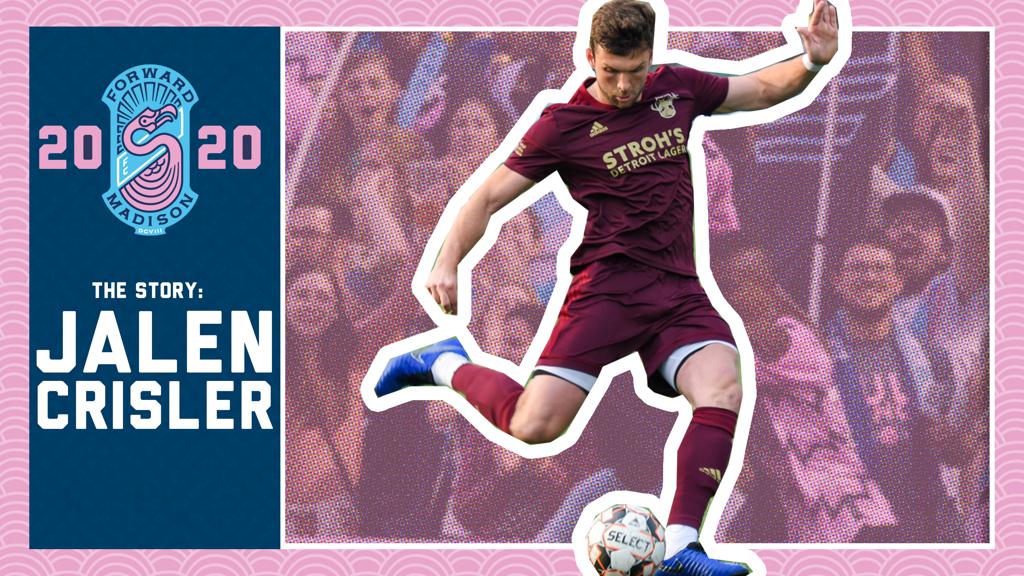 Jalen Crisler, Forward Madison’s newest player, had always imagined his professional career would start with a bang. Instead, it nearly ended with a pop.

It was October 29, 2017, senior night for the Gonzaga University Men’s Soccer team. Crisler, a lanky, 6’4” defender, knew it would be his last home game as a Bulldog, and he’d played his heart out.

Over the past four-and-a-half years, Crisler had gone from virtually unknown walk-on to teaam captain and star player. Despite redshirting his freshman year, Crisler had made a name for himself, playing well enough to earn several post-season invites to professional tryouts.

On senior night, though, with the score level at 0-0 at the end of regulation, Crisler’s mind was solely focused on the task at hand. Unlike in USL League One, NCAA matches can go to a 30-minute overtime, with the first team to score taking victory. Crisler, ever the competitor, was giving it everything for one final home win.

“It was the last five minutes of overtime,” Crisler remembered “I just happened to go plant [my foot] and the guy’s knee kind of came through mine at the wrong angle. I just felt a pop.”

Immediately, Crisler knew something was wrong.

“I guess it all hit me as soon as it happened,” he said. “You hear about it with other teammates or guys you play with. When you know, you know. The pop’s just something you haven’t felt before.”

Although it took a few days to get a diagnosis, Crisler’s “pop” turned out to be a torn ACL. Crisler would need surgery, followed by nine months of hard rehab, if he even wanted a chance of playing competitively again.

“Everything was just going through my head, my aspirations [of a pro career],” Crisler said. “It was really tough. It was a bunch of things going through your head, thinking maybe the career’s over, how am I going to come back from this.”

In the blink of an eye, Crisler’s soccer future looked like it had snapped apart. 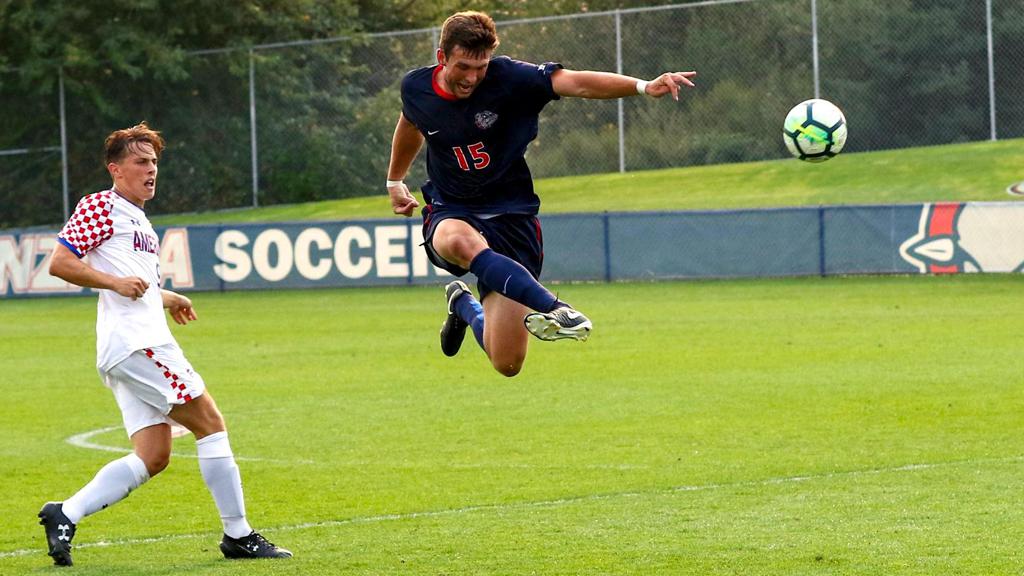 Jalen Crisler was a walk-on at Gonzaga, but became team captain by his senior year. | Photo by Gonzaga University Athletics

Maybe Jalen Crisler should have been expecting something like this. After all, his soccer story has never gone perfectly smoothly.

Growing up in Everett, Was., Crisler played as a forward, but that didn’t quite work out. So he moved out wide. Then back to midfield. It was only when he started getting serious about soccer that Crisler found his best position was in the defense.

Even then, not everyone saw Crisler’s talent. Coming out of Archbishop Murphy High School, which has less than 500 students, Crisler was not a highly sought-after recruit. When Gonzaga offered to make him a preferred walk-on, he jumped at the chance despite knowing he would be on the fringes of the team’s roster.

Although Crisler was forced to sit out his first year due to injury, he finally got going once he started playing some games, eventually earning First Team All-West Coast Conference honors in 2016. For Crisler, his entire life involved overcoming obstacles.

Looking back, then, there was little surprise in how Crisler reacted to his injury.

“I had the surgery, and then six days after I was off the crutches and in the training room doing everything I could [to get back],” Crisler said. “Right away I was like, ‘I’m coming back.’ That was my mindset every single day.”

Crisler’s recovery was anything but easy. He would regularly set his alarm for 5:30 a.m. to go to rehab for two hours, then head to work at his 9-to-5 job (Crisler had a gig doing marketing for a physiotherapy clinic) before hitting the gym in the evenings and repeating the process the next day. In between, he went back through his old Gonzaga tapes, creating highlight videos to send to professional coaches.

“It was morning to night almost every day,” Crisler said. “It was a grind, but it kept me busy. It kept me focused.”

After his professional hopes had nearly been shattered, Crisler was putting the pieces together again. 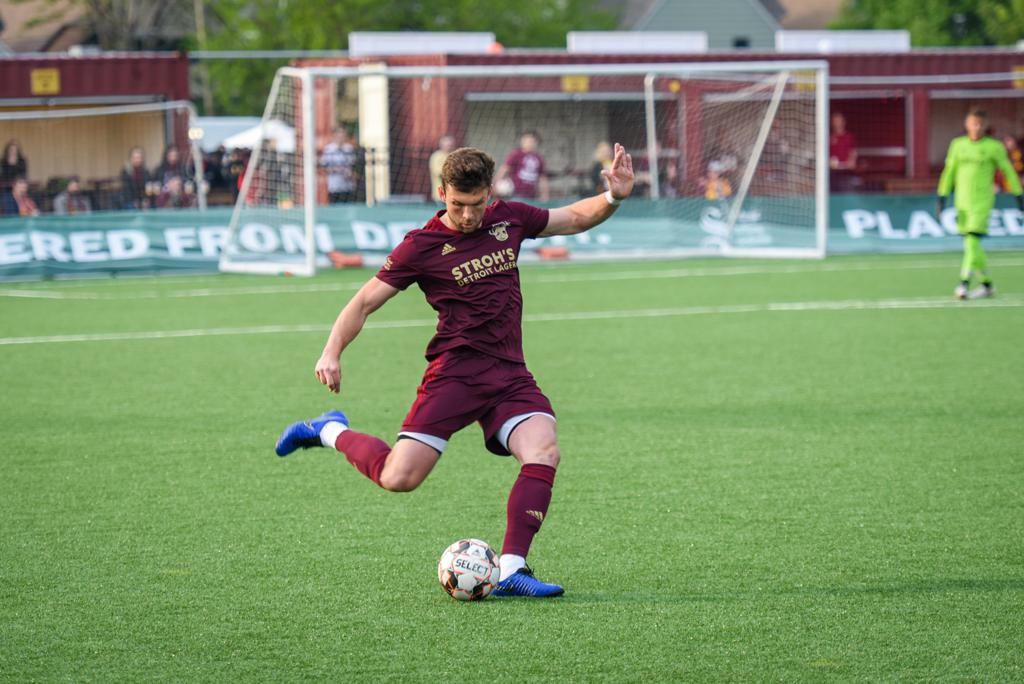 In October 2018, nearly a whole year after Jalen Crisler first heard his knee pop, he made his return to the soccer pitch. Without any obvious professional options in sight, Gonzaga offered him a position as a volunteer coach, allowing Crisler to start his on-field training.

Meanwhile, Crisler sent his highlight tapes around and actually participated in a few combines, but he had trouble finding the right opportunity. It seemed no one wanted to take a chance on a player who hadn’t featured in so long. If 12 months of inaction had taught Crisler anything, though, it was the need to be patient.

Finally, he got his chance.

Crisler joined Indy Eleven of the USL Championship for preseason in 2019 after (in a twist of ironic fate) an injury opened up a spot on their roster. Although Indy declined to sign Crisler, they offered him up to former technical director Trevor James, who had recently been installed as head coach for Detroit City FC in the National Premier Soccer League.

Crisler signed for Detroit on March 28 and found his groove in the Motor City, earning a starting spot during the team’s first place finish in the NPSL Great Lakes Division in the spring as well as their NPSL Members Cup victory in the fall.

With a year of post-collegiate playing experience under his belt, Crisler began looking for the next step. He found it at Forward Madison’s invite combine in January, where he impressed the Flamingos’ coaching staff with his ability not only to win duels defensively, but also to pass the ball well out of the back.

“For me, it’s always been a dream to play at this level,” Crisler said. “Having those aspirations and dreams, playing in front of big crowds and playing at the highest level, that’s what I wanted to do. You have an injury and it all flashes in front of your face a little bit.”

Two years ago, Jalen Crisler’s soccer career looked as if it had fallen apart just as it was about to begin. Now, after clawing his way back, Crisler said he’s determined to make the most of his chance with Forward Madison.

“I’ve been told at times, ‘Maybe you’re not athletic enough,’ or maybe different things,” Crisler said. “Coming off the injury, [I thought] maybe it wasn’t going to work. Getting that [contract] brought me back to all of that and all the hard work that’s been put in. I just took a moment to let it sink in.”