Forward Madison to host Wisconsin Badgers in 'Battle for Madison' 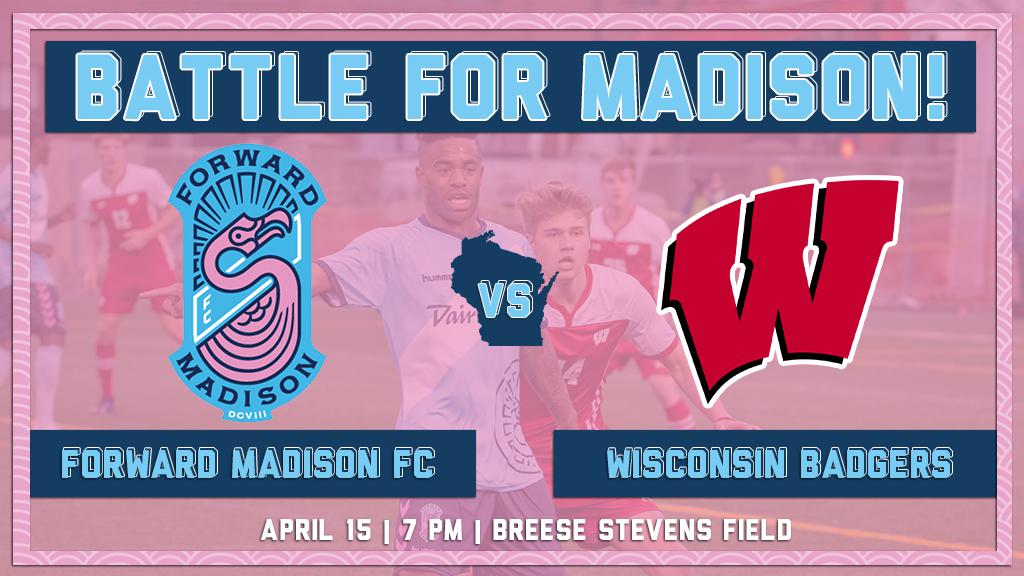 Forward Madison FC will host the UW-Madison Men’s Soccer team for a special exhibition game on Wednesday, April 15 at 7 p.m., the club announced Wednesday. The ‘Battle for Madison,’ which is included in Forward season ticket packages, will give fans a chance to see their city’s professional club take on its collegiate counterpart at Breese Stevens Field.

According to FMFC head coach Daryl Shore, the Battle for Madison represents another facet of Forward Madison’s commitment to grow the game in its local community.

“Having our professional club and the city’s top college team get together shows that we’re committed to building a soccer culture in Madison,” Shore said. “This city has demonstrated that it’s passionate about the sport, so we’re giving them a night to enjoy top-level soccer at its best.”

The Battle for Madison exhibition will be included in Forward Madison season ticket packages as well as in certain six-game ticket packages. Single-game tickets, which are set to go on sale in early March, will feature a special student discount.

Forward Madison hosted UW-Madison last year as well, winning 2-0 in the Flamingos’ first game at Breese Stevens Field on April 16. Forward then traveled to the McClimon Soccer Complex for a scrimmage on Aug. 21, taking a 2-1 victory in the mid-season test.

According to Wisconsin head coach John Trask, the game will give his players a taste of soccer at the next level. Former Badger Carl Schneider featured for the Flamingos in 2019, playing in 10 USL League One games and earning one Team of the Week nod.

“This is a tremendous opportunity for our players to see how they stack up against professional players,” Trask said. “I would like to thank COO Conor Caloia and head coach Daryl Shore for giving our program a great game at Breese Stevens Field and I know our players are excited.”