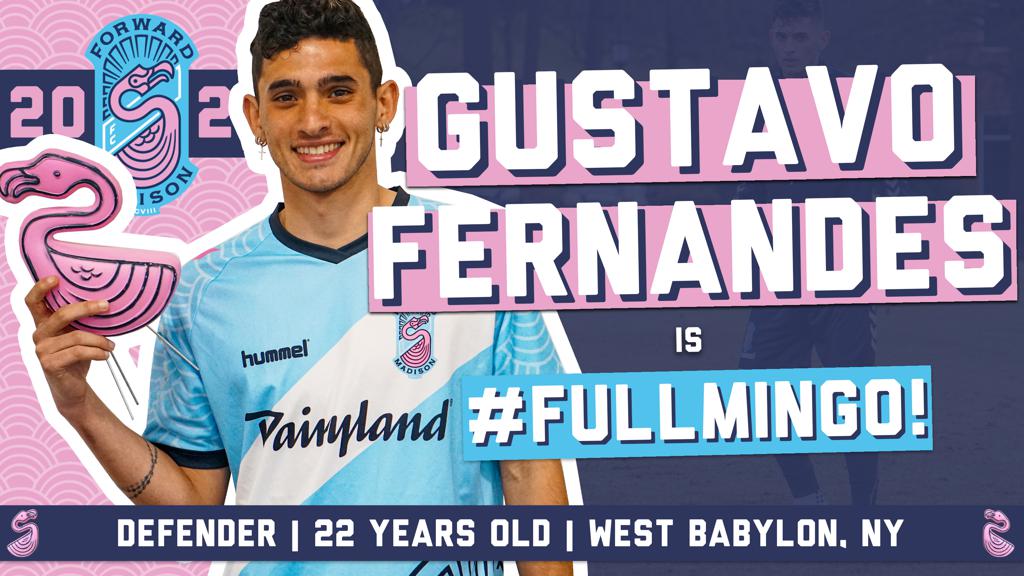 According to Head Coach & Technical Director Daryl Shore, Fernandes can play as a right back, a center back, or a defensive midfielder, filling several potential areas of need for FMFC.

“When you have a guy who can play three different positions and play them all pretty well, it becomes an important asset to your team,” Shore said. “We felt Gustavo’s versatility was a good fit as well as his character and the way he fit in with our players.”

Fernandes, who grew up in West Babylon, N.Y., comes from a soccer family. His father had a 10-year pro career in Brazil, while his older brother, Leo, plays for the Tampa Bay Rowdies in the USL Championship. Prior to joining the Flamingos, Fernandes anchored the defense for Stony Brook Men’s Soccer, spending offseasons with the Ocean City Nor’easters and Tampa Bay Rowdies U23s of USL League Two.

Fernandes joined Forward Madison for three weeks during its February preseason camp in Birmingham, Ala., where he made an impression on the coaching staff with his game awareness and technical proficiency.

“I was nervous the first couple of days because you hear a lot about preseason and what goes on, but after the game in Birmingham where I played the whole second half, I was like, ‘Okay, I can do this, I can compete with these guys,’” Fernandes said. “I’m ready to give my 100 percent. I’ll do everything I can to help the team win.”

According to Shore, Fernandes proved during those games that he could be successful in USL League One and beyond.

“Gustavo sees the field well, he’s a good passer and we like the fact that he’s got bite to him,” Shore said. “He had a good three weeks with us in preseason and we felt he earned a contract.”