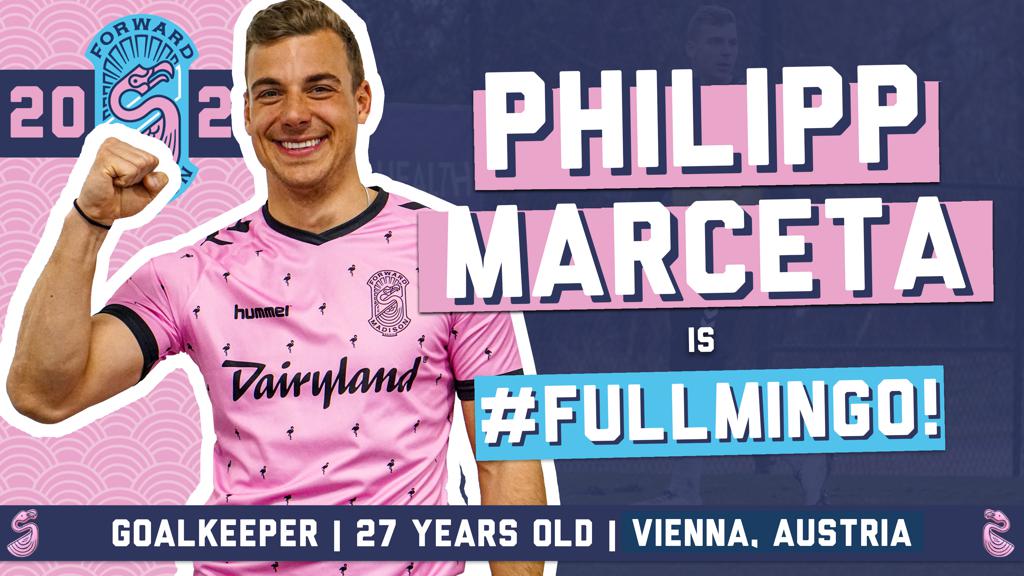 Forward Madison FC has signed 27-year-old Austrian goalkeeper Philipp Marceta, the club announced Monday. Marceta brings a wealth of experience between the posts, having played for clubs across Europe in a decade-long career.

According to Head Coach & Technical Director Daryl Shore, Marceta will be able to fill a position of need for the Flamingos.

“Philipp is an experienced goalkeeper who’s played at a good level overseas,” Shore said. “We view Philipp as a number one goalkeeper and we think he is a goalkeeper that will have many bright moments for this club.”

Marceta grew up in Vienna and played at youth level for his hometown team, FK Austria Wien. He would go on to represent several clubs in the Austrian lower divisions as well as Athlone Town in Ireland and, most recently, SV Heimstetten in the German fourth tier.

After getting his Green Card and moving to the United States, Marceta went on trial with Seattle Sounders FC of Major League Soccer before finally landing with Forward Madison. Marceta notably played the first half for the Flamingos’ preseason game against Saint Louis FC on Feb. 29, saving a penalty kick right before the intermission.

“After my first talk with Daryl, I was sure that this was going to be a great fit,” Marceta said. “I’ve heard that the fans are crazy and nuts - in a positive way, of course - and I’m excited to see them perform on gamedays.”

For Shore, a goalkeeper in his own playing career, Marceta has all the tools to be successful in Madison.

We brought Philipp in on our preseason trip when we were in Louisville and you could tell right away that he’s a leader in goal,” Shore said. “He’s very good at coming for crosses; we’re comfortable with how he can play with his feet; he’s a solid shot-stopper. He checks every box that you look for in a goalkeeper.”