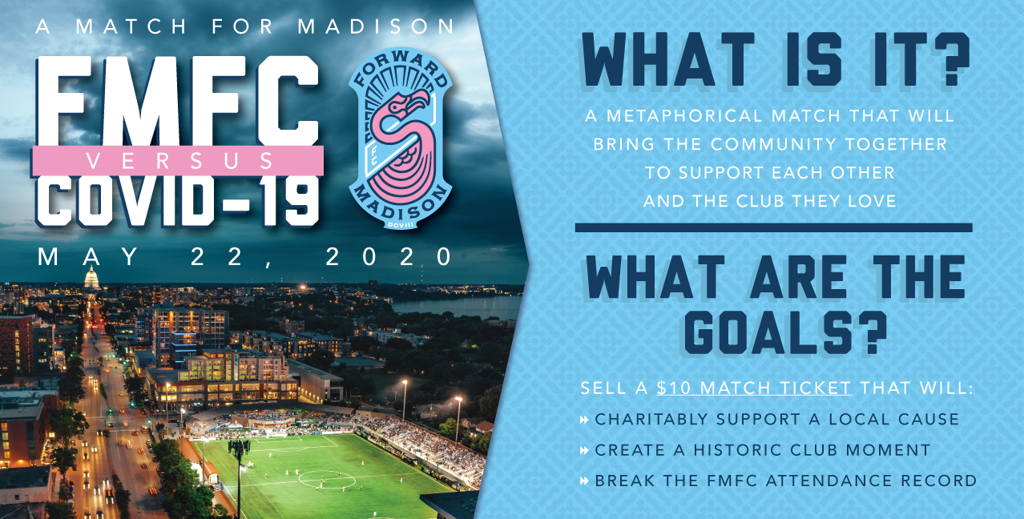 Help us break the attendance record by clicking here!

Forward Madison FC announced its ‘Match For Madison’ campaign today that will raise money to support local restaurants and healthcare workers on the frontlines of the battle against COVID-19. The Flamingos are aiming to break their attendance record by selling tickets to the metaphorical match. Fans will be able to purchase tickets at: https://www.forwardmadisonfc.com/matchformadison

According to Forward Madison COO Conor Caloia, the team is counting on support from near and far to accomplish its goal.

“Forward Madison has always been, first and foremost, a community organization,” Caloia said. “Now more than ever, we have a responsibility to not just look out for ourselves, but to help this city in its time of need. We’re calling on soccer fans from Madison and across the world to join us in this fight.”

Fans who purchase a ten-dollar ticket to “Forward Madison vs COVID-19” will receive a commemorative ticket as well as their name included on a mural that will go up at Breese Stevens Field. Five dollars from each ticket will go to a fund to purchase meals from six local restaurants, with the meals then being donated to healthcare workers at UW Hosptial, American Family Children’s Hospital, UW Health at The American Center and UnityPoint Health - Meriter Hospital.

Forward Madison is partnering with the following local restaurants: Avenue Club, Alimentari, A Pig in a Fur Coat, Dark Horse, Salvatore’s and the Great Dane Pub.