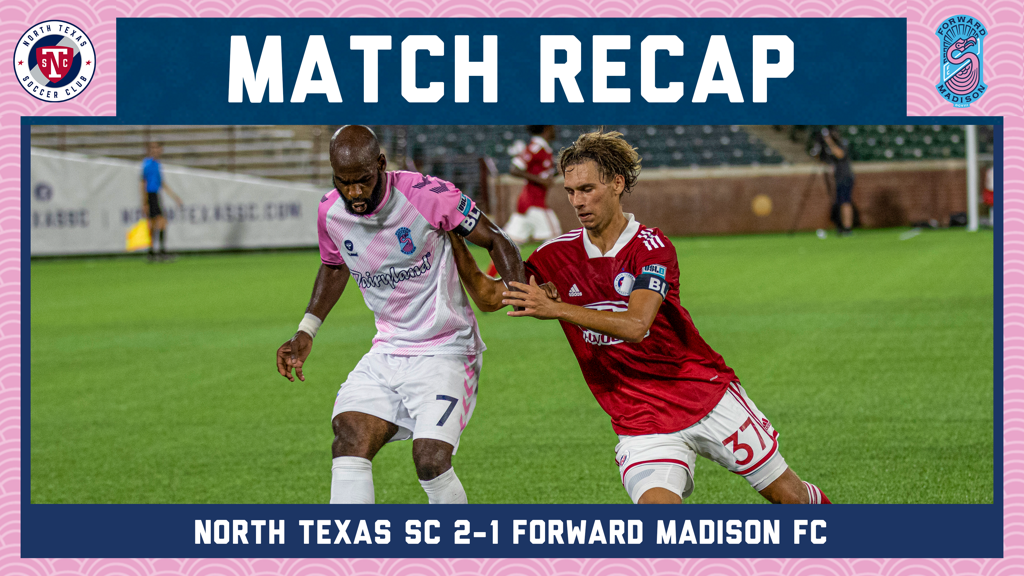 Forward Madison FC’s return to soccer gave more cause for celebration off the field than on it, as the Flamingos fell to defeat in their season opener on Saturday, losing 2-1 on the road against reigning USL League One champions North Texas SC.

The Flamingos came on strong in the first half, but ran out of steam as the game wound down, conceding the decisive goal at the hour mark.

North Texas got the scoring started in the 11th minute, with forward Benjamin Redzic’s shot taking a heavy deflection on its way to bouncing past a stranded Philipp Marceta.

It wasn’t long before Forward Madison equalized, scoring in the 30th minute thanks to new striker Wojciech Wojcik, who was brought in to fill a void at the center forward spot. Fullback Jiro Barriga Toyama made a mazy run through the North Texas defense, finding Paulo Júnior on the wing before the Brazilian crossed into the center and Wojcik tapped home.

Barriga Toyama in particular impressed during the game, winding his way past North Texan defenders and making several key tackles on the other end of the pitch.

The Flamingos went into halftime level, but North Texas retook the lead  in the 59th minute thanks to Ronaldo Damus, League One’s top scorer during the 2019 season. Damus split the Flamingo center backs, managing to poke the ball through Marceta’s legs for his team’s second goal.

Marceta, Wojcik, Jalen Crisler and Gustavo Fernandes all made their first-ever starts for Forward Madison. Jamael Cox and Alex Monis made their Forward debuts off the bench as substitutes.

Following Saturday’s defeat, Forward Madison will return to Wisconsin for its home opener on July 31 against Greenville Triumph SC at Hart Park in Wauwatosa. The game is set to kick off at 7 p.m.

It's an incredible first goal of 2020 for Forward Madison!