Greenville’s Keegan Named League One Player of the Week

TAMPA, Fla. – USL League One announced on Tuesday that Greenville Triumph SC forward Jake Keegan had been named the League One Player of the Week for Week 2 of the 2020 season.

Keegan continued his hot start to the season with two goals on Saturday night in the Triumph’s 3-2 victory against the Richmond Kickers at Legacy Early College. Keegan has now recorded three goals in Greenville’s opening two games of the season to lead the 2019 League One Finalist to a pair of victories. 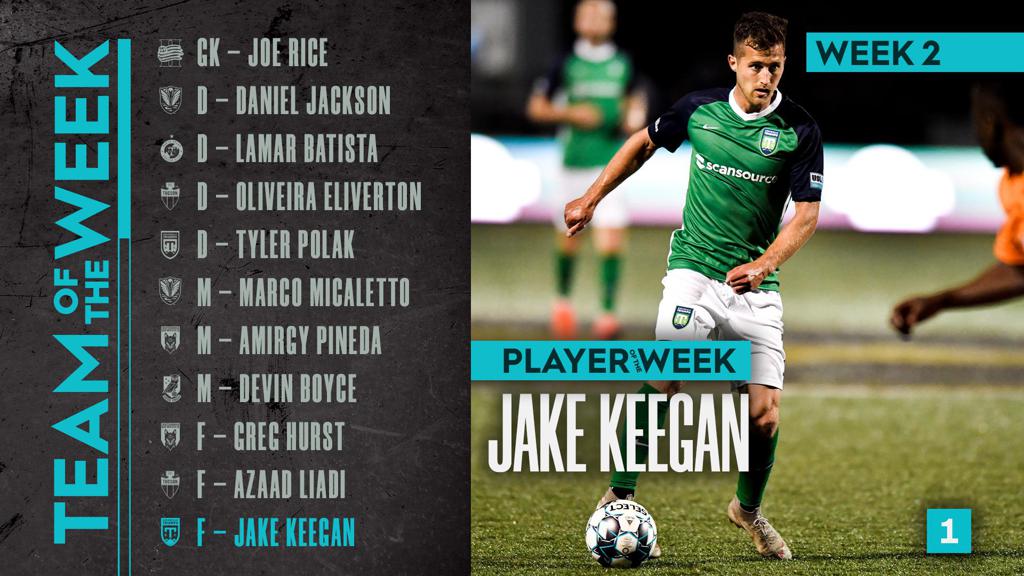 GK – Joe Rice, New England Revolution II: Rice recorded a four-save shutout and was accurate with his distribution, completing 16 of 21 passes and 5 of 10 long passes in the Revolution II’s scoreless draw with Union Omaha.

D – Lamar Batista, North Texas SC: Batista had a strong all-around game on the back line, winning 5 of 6 duels and four interceptions while completing 118 of 126 passes in NTSC’s victory against Forward Madison FC.

D – Oliveira Eliverton, FC Tucson: Eliverton had one assist and three chances created in attack and was solid defensively, winning 15 of 21 duels and 5 of 8 tackles while recording two interceptions.

M – Amirgy Pineda, Chattanooga Red Wolves SC: Pineda had one assist and four chances created for the Red Wolves while winning 11 of 16 duels and completing 24 of 33 passes in a 2-2 draw against Tormenta FC

F – Greg Hurst, Chattanooga Red Wolves SC: Hurst scored both of the Red Wolves’ goals in a 2-2 draw against South Georgia Tormenta FC while putting all three of his shots for the game on target.

F – Azaad Liadi, FC Tucson: Liadi recorded a goal and assist while registering seven shots and three key passes overall as Tucson rallied to a 2-1 victory on the road against Fort Lauderdale CF.

F – Jake Keegan, Greenville Triumph SC: Keegan recorded a pair of goals and put four shots on goal overall as the Triumph took their second consecutive victory to start the season in a 3-2 win against the Richmond Kickers.