This is how Philipp Marceta became the ‘Gas Station Goalie’

Flamingos’ ‘keeper adds a sense of humor to his saves 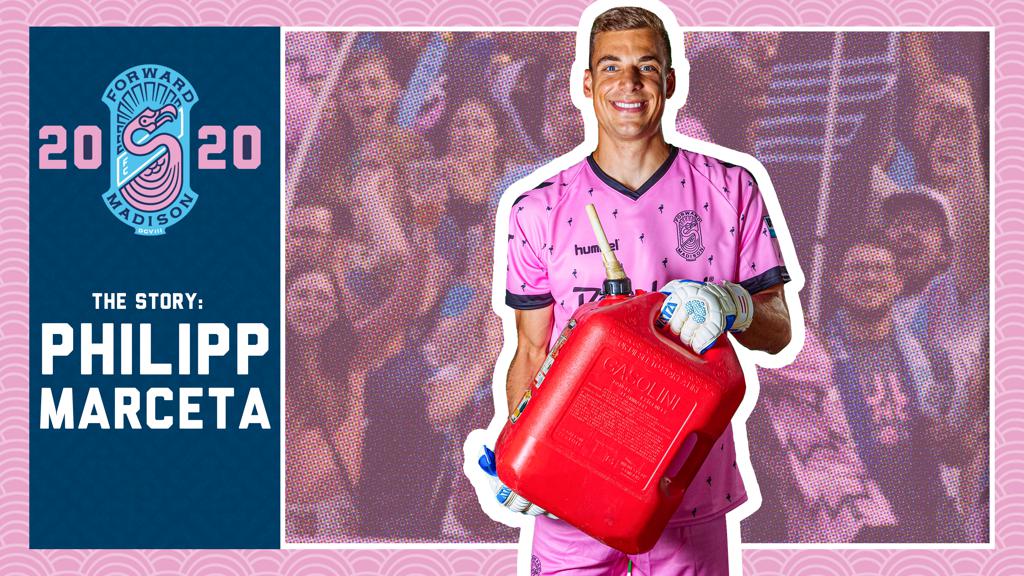 Attempting to write a serious article about Philipp Marceta is more difficult than you’d imagine. Forward Madison’s first-choice goalkeeper may go about his duties on the field in a pragmatic way, but off it, you’d be hard-pressed to get through a few sentences without him cracking a joke.

Marceta (pronounced mar-CHET-uh) will improv one-liners about playing for a professional club in Munich (“It was a good experience for various reasons, Oktoberfest being one of them”). He’ll also recount how, as a teenager, he convinced a statistician to incorrectly list him as ‘two-footed’ on an online soccer database. In a way, it’s impossible to tell Marceta’s story without adding in a little humor.

All of which brings us to a British Petroleum gas station on the outskirts of Nashville. 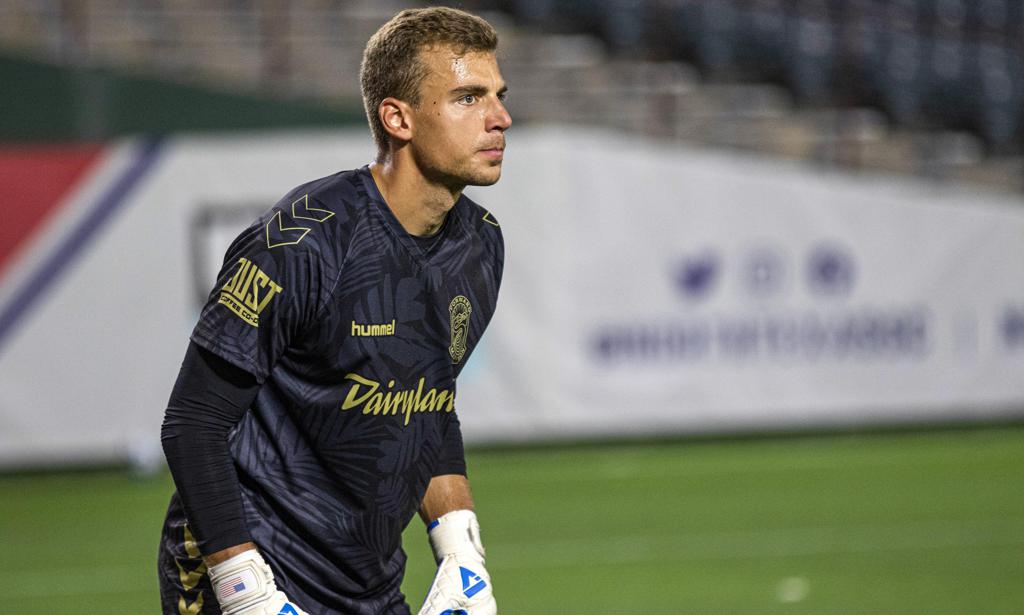 Forward Madison needed a goalkeeper. Philipp Marceta needed a team. It was really as simple as that.

Marceta, who grew up in Vienna, Austria (he is 27 now), had spent his entire career playing for teams across Europe. After starting out in his home country, he signed with Athlone Town in Ireland, later joining SV Heimstetten of the German third division in 2019.

At the season’s end, Marctea moved to Tennessee to live with his wife, who is American. This left him in a tricky spot as far as finding a soccer club, though. Marceta had to wait to get a Green Card before many clubs would express interest in him, since he would have otherwise taken up teams’ limited international roster spots.

“There were times when I thought about quitting, just because it didn’t look good, but it’s always been my dream to keep playing,” Marceta said. “It’s the one thing I love doing and I just wanted to do it so badly.”

After an extended trial with the Seattle Sounders of Major League Soccer, Marceta’s agent got a call from Forward Madison head coach Daryl Shore. The Flamingos had lost two goalkeepers (Brian Sylvestre and Ryan Coulter) from their 2019 roster, and despite being in the middle of a February preseason camp, Shore was still looking for the right replacement.

As it happened, Marceta joined up the team at a gas station. The way he tells it, you’d think it was a meeting of star-crossed lovers, simply fated to find each other.

“I was just minding my own business, filling up my car,” Marceta joked. “I saw the ‘Mingo Bus pulling up and thought, ‘This looks not sketchy at all. You [just] hop in a bus with a bunch of dudes.’ So I just did it.”

Of course, that’s not quite what happened. The team van needed to stop for fuel on the way from Alabama to Kentucky, which made the BP near Marceta’s home a convenient meeting point. But as with all of his stories, Marceta’s Forward Madison adventure couldn’t be complete without a joke. 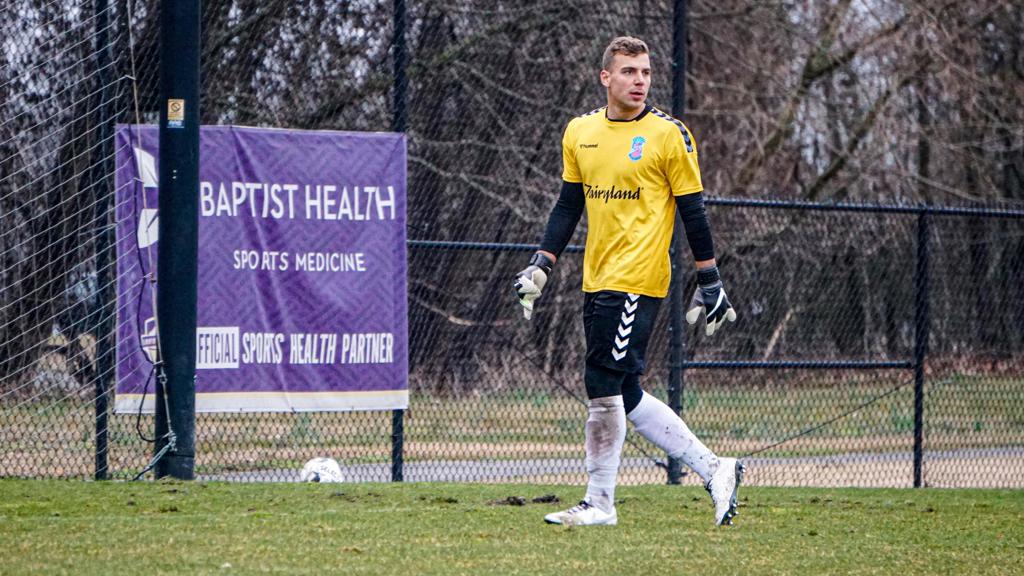 Philipp Marceta joined Forward Madison during preseason, meeting the team at a British Petroleum gas station on the way to Louisville, Kentucky. | Photo by Jason Klein

Going left to get it right

It didn’t take long after the ‘Mingo Mobile had left the gas station for Marceta to show why Shore wanted to take a look at him. In his first preseason appearance, he came on to play the second half against USL Championship powerhouse Louisville City. Louisville had scored four goals in the first half, but Marceta didn’t allow any in the latter period.

During the Flamingos’ preseason game on February 29 (which ended up being the team’s last match before COVID-19 delayed its season), Marceta played the first half in goal against Saint Louis FC.

“Before we went out, Coach [Shore] told us there’s one job: We don’t want to give up a goal in the first half,” Marceta said. “I was like, ‘Okay, that seems like he’s addressing me.’”

The Austrian did his job for the first 45 minutes, making saves and coming out to catch crosses. But in stoppage time, Forward conceded a penalty, which left Marceta all alone to defend it. Although he said he normally researches penalty takers’ habits, there wasn’t enough time or information to do that in preseason.

“I thought to myself, ‘I haven’t gone to my left in a while, I’ll just go left,’” he said. “I dove to my left and luckily the striker decided to put the ball right there. We got the job done not to give up a goal in the first half.”

Shortly after the team returned to Madison, Shore offered Marceta a contract.

Here's our new goalkeeper Philipp Marceta saving a penalty against Saint Louis FC in preseason. Our best save of 2020!

Fast-forward five months, and it’s safe to say the 2020 season hasn’t gone exactly to plan, neither for Marceta nor the whole world of professional sports. Forward Madison played its first game since the Saint Louis match on July 25, with Marceta starting in goal against defending USL League One champions North Texas SC.

Marceta, along with the rest of the team, evidently needed time to scrape off the rust in a 2-1 loss. Still, he started to show his skill during the second half of the affair, making several crucial saves to keep the Flamingos in the game.

In some circles, supporters have taken to calling him ‘Big Phil’ - or BP - as an ode to Marceta’s unique origin story. As usual, he’s in on the joke: Marceta even posed with a gas canister during a team photoshoot before the North Texas game.

For a team that has distinguished itself through its sense of humor, Marceta blends in naturally. At long last, though, he’ll have a chance to endear himself to the fans through his goalkeeping.

“I’ve found a club that’s a great fit,” Marceta said. “Now I can keep doing what I love.”

Forward Madison FC's 2020 season is here! Secure your spot for eight home games at Hart Park by calling by calling 608-204-0855 or visit https://www.forwardmadisonfc.com/tickets.