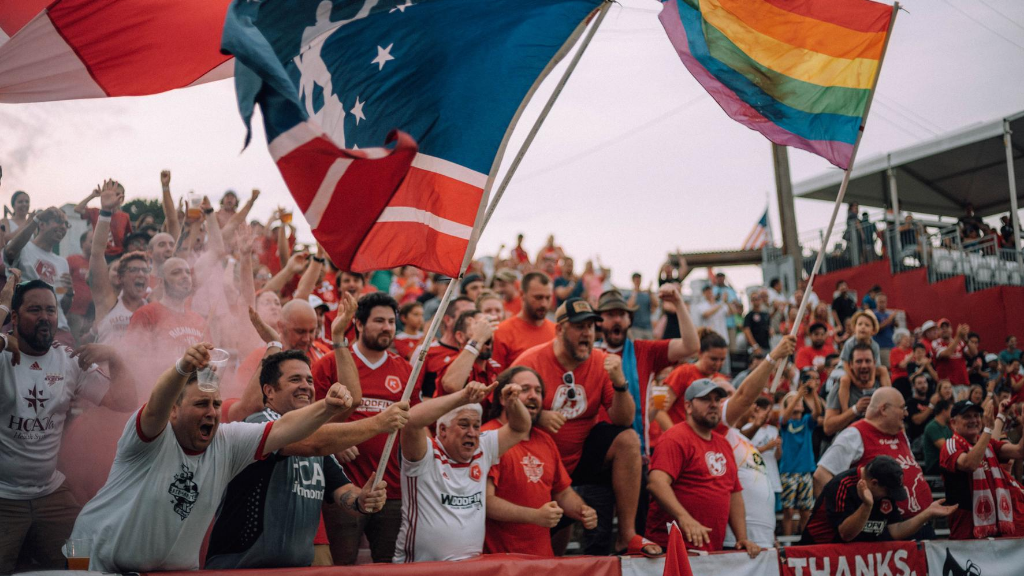 Richmond Kickers supporters at a match during the 2019 season. Photo courtesy of Lianne Coppertino.

RICHMOND, Va. – The Richmond Kickers, in partnership with the RVA Sports Foundation have invested heavily over the last six months to improve the club’s “vintage home” at City Stadium. The project was led by Justin Cornwell from Draper Aden Associates, who served as the site coordinator during our comprehensive renovations. Cornwell worked closely with E.J. Wade Construction, whose team was led by William Green.

“The Richmond Kickers have completed exciting new improvements to City Stadium with an end goal of enhancing the game day experience,” said Cornwell. “An upgraded irrigation system has been installed to assist in maintaining a first class natural grass playing surface for the players. To improve sight lines and enhance the experience of both players and fans, all existing overhead power lines have been placed underground, new LED sports lighting has been installed and improvements have been made to the plaza.”

All of the field lights have been upgraded to all-new LED lighting with help from Steve Wiley and Musco Lighting.

With the new lights, the light poles that sat in front of the stands have now been relocated behind the stands to improve the fan viewing experience. Wiley and his team worked closely with Randy Branham from Branham Electric, and Thompson Consulting Engineers who provided electrical drawings.

A new 2020 Partner, Segra has led the technology revolution at City Stadium so fans will be able to connect through stadium Wi-Fi to improve the social media experience on game day and during other events at the stadium.

With the in-stadium sound being such an instrumental part of the game day experience, the Kickers relied on Dan Schultz, President of Sound Pro USA, to bring City Stadium into the 2020 world of sound. He added speakers on the new concourse light poles, as well as equipped both the front and back of the Press Box with a connected speaker system so we can communicate with fans coming and going.

Working with Eddie Thompson from Montgomery Irrigation, the club have updated the antiquated irrigation system, which will meet the demands of modern day athletes with an improved playing pitch.  The field is considered one of the top grass soccer fields in the country, having hosted many memorable soccer matches since the conversion from synthetic turf to natural grass in 1995.

The club was excited to work with E.J. Wade, Dominion Energy, Town and Country Electric to remove the previous power lines, and stadium wiring. Working closely with the City of Richmond, they gave the approval to bury the lines and change the viewing experience from the concourse level. Safety and a more uniformed concourse drove the new concrete around the entrance plaza and the mezzanine level. In the other areas, we went with a uniformed crushed granite system that will be complimentary to future development on the site.