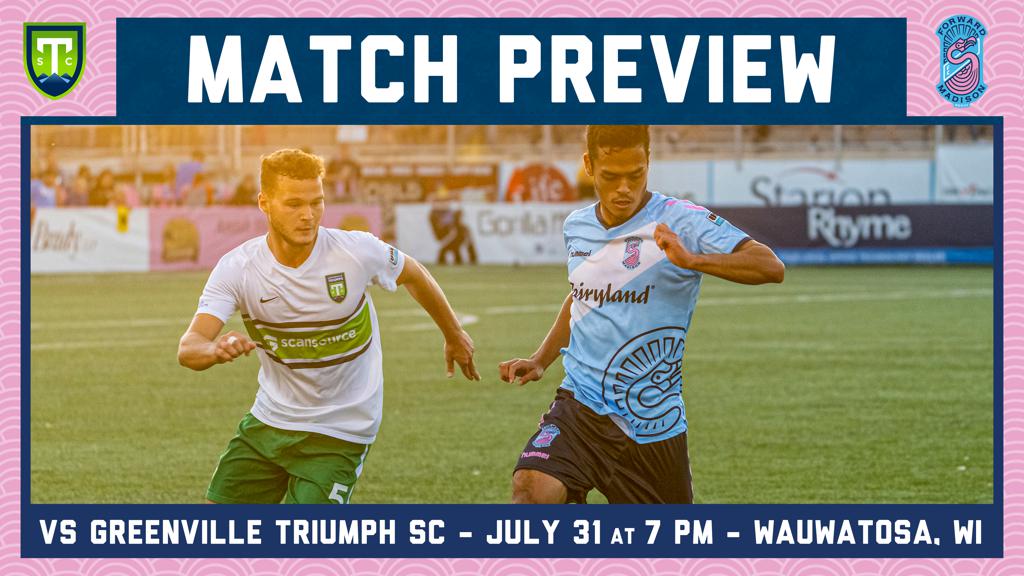 Get your tickets to Forward Madison vs Greenville Triumph!

Forward Madison FC is preparing to leap into the unknown on Friday, with the Flamingos set to take on Greenville Triumph SC in the team’s ‘Home Away from Home’ Opener at Hart Park in Wauwatosa.

As FMFC acclimates to their new home, players and staff have had to deal with the challenges of a temporary move: A longer commute, unfamiliar turf, and, soon, a very unusual atmosphere for a Forward Madison game. But with only 15 more matches to go in a shortened USL League One season, Head Coach Daryl Shore knows his team will have to adapt quickly.

Speaking on Behind the Feathers, Shore said Friday’s game has been a long time coming.

“We’re excited to finally play our home opener at our home away from home, Hart Park,” he said. “Our guys are just excited to play a game in front of our home fans.”

Forward was originally slated to kick off its season in March, but only started up last week due to health concerns surrounding the COVID-19 pandemic. The Flamingos lost 2-1 on the road to North Texas SC last Saturday, falling off in the latter half of the game after a strong start.

“I think it was evident that we hadn’t played a game in four months,” Shore said. “That was our first 90-minute match and we do feel like we lost a little steam, but overall we were pleased with the way we played. We made a few mistakes, which we got punished for, but at the end of the day we felt good about re-watching the game and we feel good going into Friday’s game against Greenville.”

One piece Shore will be missing is center back Jalen Crisler, who started the game against North Texas. Crisler came off early with a gash near his knee which, according to Shore, required 20 stitches to heal.

Still, the Flamingos will be boosted by the potential debuts of center back Josiah Trimmingham and midfielder Michael Vang. Trimmingham, the Trinidad & Tobago international, has been training with the team this week; Shore said that creative playmaker Vang, meanwhile, will be a game-time decision as he waits on registration paperwork to be approved.

On the other side of the pitch, Forward’s opposition, Greenville Triumph SC, will present a worthy challenge to the ‘Mingos. The Triumph were League One runners-up last year and have won their first two games to start 2020, meaning FMFC would go nine points behind if they were to lose Friday’s game.

Greenville will be without defender Brandon Fricke, who is serving a suspension for a red card, as well as several other players who are injured or otherwise unavailable for selection. Still, Shore said he can’t afford to underestimate the League One leaders.

“Now that we’ve got one game under our belt, I think that’s enough,” he said. "Now it’s time to really put our focus on making sure we come out of the gates strong, dictate the tempo of the game and really put Greenville under pressure as much as we can to try to get the three points.”

Following Friday’s home opener, the Flamingos will travel to play the Richmond Kickers on Saturday, Aug. 8 at City Stadium. Forward Madison will play its next home game on Friday, Aug. 14 against South Georgia Tormenta FC.