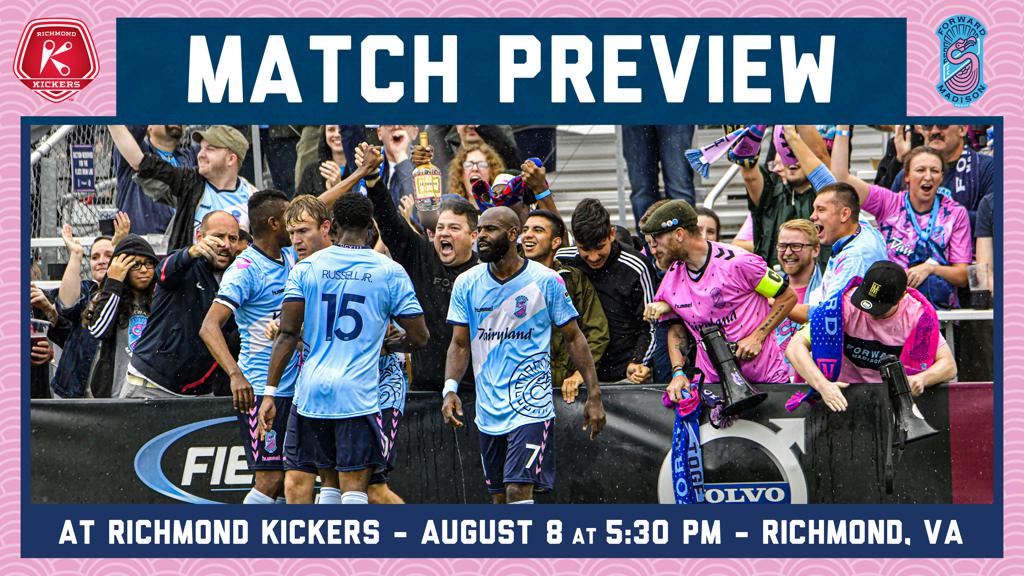 Forward Madison is set to kick off its third match of the 2020 USL League One season this Saturday, traveling to play the Richmond Kickers as the Flamingos look for their first win of the new campaign.

FMFC has now had two matches to adjust to life in a shortened, 16-game regular season, dropping its opener at North Texas SC but rebounding with a 0-0 draw against league-leading Greenville Triumph SC last Friday. Speaking on this week’s episode of Behind the Feathers, Head Coach Daryl Shore said the Flamingos’ next step is to improve offensively.

“We’ve really spent a lot of time on our attacking patterns and our attacking situations,” Shore said. “We’re [working on] how to get the ball forward quicker, how to move better off of each other and really looking to try and get the ball into our opponents’ half of the field.”

Saturday’s match carries extra importance as the latest iteration of the Henny Derby, a moniker created by Black supporters of each club who exchange a golden bottle of Hennessy depending on the victor. Forward Madison claimed Henny bragging rights in 2019, beating Richmond on two out of three occasions.

Although Shore admits that he is not a cognac connoisseur,  he said the team understands how meaningful a win would be to Forward's supporters.

“It’s important to our fans, and we’re a team that does everything possible to make sure our fans are taken care of,” Shore said. “If that means trying to retain the Henny Cup, then that means we’ll do everything in our power to get that done.”

READ: "Get the Henny! Soccer and a Celebration of Black Culture"

Forward Madison currently sits ninth in USL League One, four points off the playoff spots with a game in hand. The Flamingos will be without center back Jalen Crisler, who is recovering from a knee injury sustained against North Texas. Shore said there was a chance midfielder Michael Vang could be available, but is still waiting on the resolution of paperwork issues.

In Richmond, FMFC finds itself up against a team that underwent major changes in the offseason, bringing in a new head coach and adding more than a handful of new players. Manager Darren Sawatzky, who spent 2019 with FC Tucson, has gotten off to a 0-1-1 start, although this will be his first home game with the Kickers.

According to Shore, the Flamingos will have to watch out for Richmond’s speed on the flanks, which is an especially potent part of its attack.

“They’re a dangerous team,” he said. “If we’re not sharp defensively and we’re not tuned in with our outside backs, they’re going to look to get in behind us. What we really have to do is turn their wingers into defenders.”

The Kickers will be without fullback Wahab Ackwei, who was suspended two games by League One’s Independent Discipline Panel. Ackwei was one of Richmond’s standout players in 2019, claiming a spot on the All-League Second Team.

“Richmond’s a good team and it’s their home opener so they’re going to be flying,” Shore said. “It’s an important three points for both teams. We’ve got to make sure we go in with the right mindset.”

Tickets for Forward Madison FC’s 2020 season are now available! Get yours by calling 608-204-0855 or visit https://www.forwardmadisonfc.com/tickets.