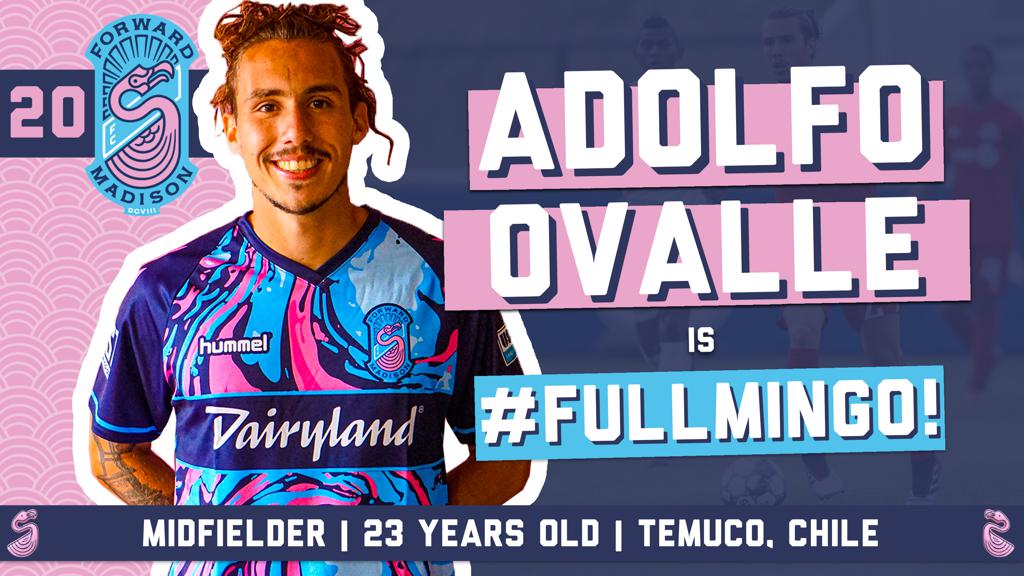 Forward Madison FC has signed 23-year-old midfielder Adolfo “Fito” Ovalle on loan from Toronto FC II, adding quality and experience to its roster. Ovalle, who served as captain for TFC II last year, has been playing in the professional ranks since 2015.

According to Head Coach & Technical Director Daryl Shore, Ovalle can play as a holding midfielder, a box-to-box midfielder, or even as a defender.

“We just thought it was too good an opportunity to pass up, having a player of his quality joining our team,” Shore said. “Fito’s a player that - even though he’s young - brings a veteran presence to the midfield and will make our roster deeper and stronger.”

Ovalle was born in Chile, but grew up near Salt Lake City in Utah. Ovalle signed for MLS club Real Salt Lake as a 17-year-old and became a regular with Real Monarchs SC in the USL Championship.

After leaving RSL, Ovalle spent time in the Italian third division and the Chilean second division before landing with Toronto FC II in 2019. Ovalle played 22 games for Toronto, the fourth-most on the team, and wore the captain’s armband for much of the season.

“I’m grateful for the opportunity to be with a big club in this league like Madison,” Ovalle said. “The team has welcomed me with open arms and every single one of them has made this transition easier.”

Ovalle’s plans to continue at TFC II this year were scuppered when the club pulled out of the USL League One season in July. Looking for options, he got a call from an old acquaintance in Shore, who coached Ovalle at Real Salt Lake.

“Daryl asked for me and it didn’t take too long to convince me that this was the spot to be,” Ovalle said. “If we can peak at the right moment, this team is set to go far. Make no mistake, the goal is to win this league.”

Forward Madison FC’s 2020 season is here! Get your tickets by calling 608-204-0855 or visit https://www.forwardmadisonfc.com/season-tickets.