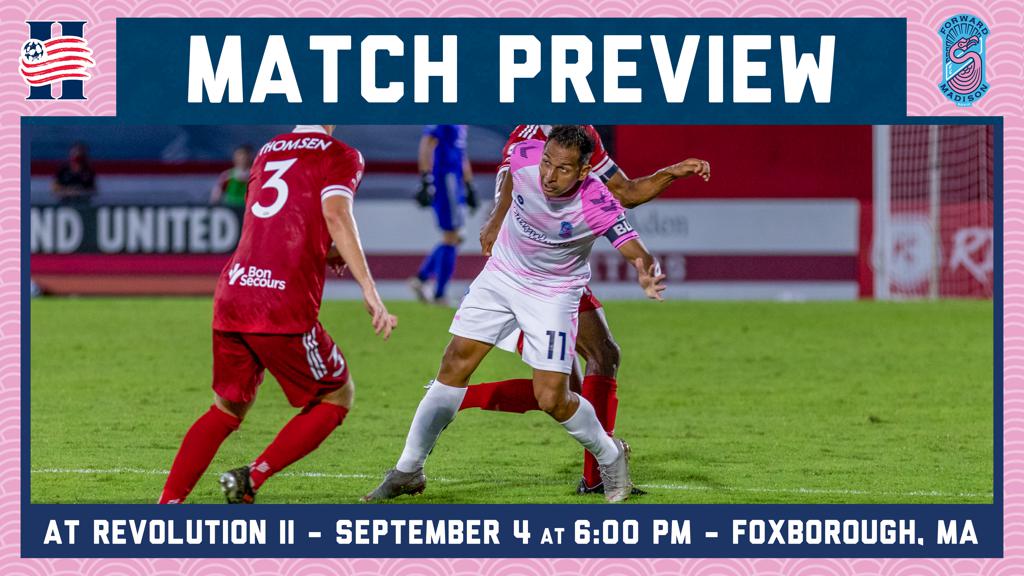 Forward Madison is set to kick off a three-game road trip this Friday, traveling to Massachusetts for its first-ever clash against League One expansion side New England Revolution II. The Flamingos have gone three games unbeaten and currently sit in fifth place, still five points beyond the playoffs.

Speaking on Behind the Feathers this week, Head Coach Daryl Shore said his side knows that dropping points - even in an away game - will make the playoff hunt harder.

“It’s not going to be an easy game and we know that,” Shore said. “We’ve got to go in and concentrate and pay attention to details, and if we do that, then I think we’ll have every chance to win the game.”

The Flamingos are coming off a weekend without a game after the team’s match against North Texas SC was postponed, with the club and its players calling for action on racial injustice following the police shooting of Jacob Blake in Kenosha.

Friday’s match marks the first time FMFC will take the field since Aug. 23, when the Flamingos earned a decisive 3-1 win against Orlando City B. Since then, Shore has expanded his roster, adding midfielder Fito Ovalle on loan from Toronto FC II.

“Fito is a guy that we played against last year that we really liked,” Shore said. “He’s a player that brings a veteran presence to our team. We just thought it was too good an opportunity to pass up, having a player of his quality joining our team”

Ovalle’s presence is all the more necessary due to an injury that midfielder Brandon Eaton picked up in training. According to Shore, Eaton is expected to be sidelined for 2-4 weeks.

Another important question the Flamingos must answer revolves around the center back position. Although team captain Connor Tobin has started every game, his partner has changed often due to injuries and suspensions. Now, upwards of four players - including Jalen Crisler, Gustavo Fernandes, Eric Leonard, and Josiah Trimmingham - could claim the spot for Friday.

On the other side, New England Revolution II comes in as a bit of an unknown quantity. The League One newcomers haven’t had a great start to their debut season, but showed the potential they could reach with a win over league leaders Greenville Triumph on August 26.

Despite the fact that the Revs sit in last place, the League One table is so congested that a win on Friday would tie them on points with Forward Madison. Midfielder Isaac Angking, who has appeared in three games for the Revolution’s senior side in Major League Soccer, leads the team with two goals.

Forward Madison FC’s 2020 season is here! Get your tickets by calling 608-204-0855 or visit https://www.forwardmadisonfc.com/season-tickets.