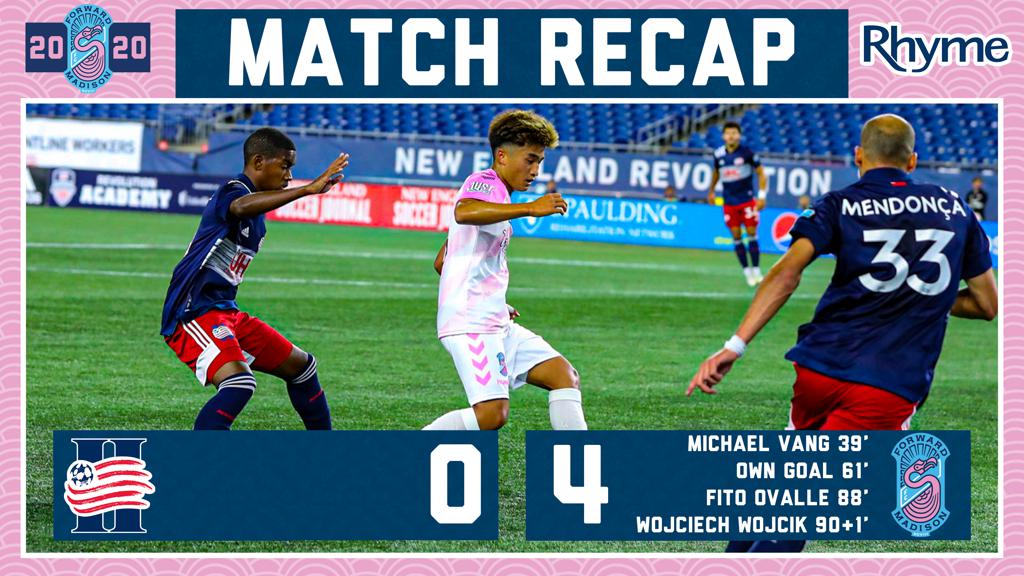 Forward Madison claimed its first road victory of the season in resounding fashion on Friday, beating New England Revolution II 4-0 at Gillette Stadium. Michael Vang continued his hot start to the year with an early goal, and new signing Fito Ovalle marked his debut with a memorable strike from distance.

Although the headlines may center around the Flamingos’ performance, Forward Madison’s players also used the occasion to make a statement separate from the sport. The game came to a stop in the 8th minute when Forward Madison kicked the ball out of play so both teams could take a knee in the center circle in a further protest against systemic racism in America. Forward Madison had postponed last week’s game against North Texas SC, with the club and its players calling for action on racial injustice following the police shooting of Jacob Blake in Kenosha.

When play resumed, J.C. Banks came close to opening the score for the Flamingos on a clever  effort in the 27th minute, taking advantage of a deflected shot to pop a header above New England goalkeeper Joe Rice. Rice, though, got his hand up to tip Banks’ shot over the bar.

Michael Vang eventually gave Forward Madison the lead in the 39th minute, stealing the ball off a defender’s foot to set himself up for a cool one-on-one finish past Rice. Vang has now scored two goals and assisted another two in his first four games for the Flamingos.

Forward Madison would add another on the hour mark after an errant back-pass from New England led to an indirect free kick inside the Revs’ penalty area. Josiah Trimmingham stepped up to take the shot and pinballed it off several defenders before the ball scuttled into the far corner of the net.

The Flamingos all but sealed the game in the 88th minute thanks to Fito Ovalle, who was making his first appearance for the team after signing on loan from Toronto FC II earlier this week. Ovalle belted a rocket from well outside the 18-yard box, leaving Rice with no chance to stop Forward’s third goal of the night.

Wojciech Wojcik finished off the display in stoppage time, intercepting a pass near the Revolution goal before tucking away his third goal of the year into the far-side netting.

Following Friday’s win, Forward Madison will enjoy a nine-day layoff before travelling to play Greenville Triumph SC on Sunday, Sept. 13. The Flamingos have moved up to fourth in USL League One, just two points away from a playoff spot.