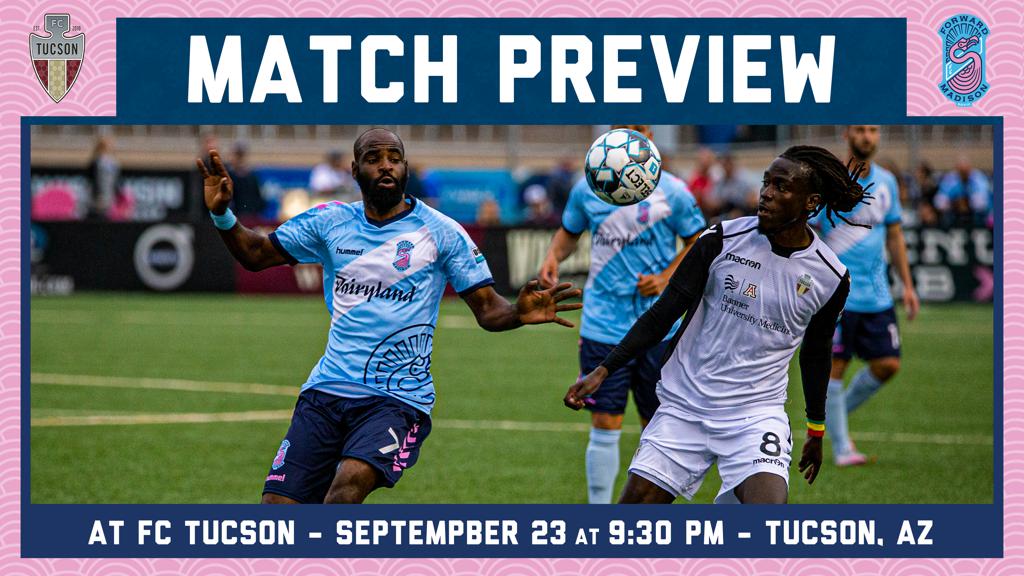 Forward Madison will finish off its three-game road trip on Wednesday, taking on FC Tucson in a late-night clash at Kino North Stadium in Arizona. With eight games left to play in their USL League One season, the Flamingos currently sit sixth in the table, still seven points away from one of two playoff spots.

FMFC is coming off a 10-day break following a loss against Greenville Triumph - the team’s first defeat in more than a month - on Sept. 13. Despite that result, though, the Flamingos have outscored opponents 12-4 in their past five games, and will certainly look to regain that momentum in Tucson.

Forward’s task will be helped by the fact that the team has a fairly clean bill of health. Center backs Connor Tobin - who missed the Greenville match for personal reasons - and Josiah Trimmingham - who picked up an injury right before the game - have returned to the squad this week. Only midfielder Brandon Eaton, who has been sidelined for several weeks, is unavailable for selection.

Wednesday’s game is also noteworthy for the potential return of forward Jamael Cox to his old stomping grounds. Cox made 23 appearances for Tucson in 2019, and has featured regularly off the bench thus far for the Flamingos.

In FC Tucson, Forward Madison is coming up against a team that is running out of time to turn its season around. Tucson has the same number of points as Madison, but has played two more games and has a worse goal differential.

22-year-old forward Shak Adams leads a front line that is among the fastest in USL League One, and which will be sure to test the Flamingo defense for pace. Although Tucson have only won one of its last five matches, Adams has crept up to fourth in the League One scoring charts with four goals this year.

The task is anything but easy for Forward Madison, which has struggled on the road (where it is 1-3-1, compared to 2-0-1 at home) and may have to deal with blistering heat, although a late kickoff time will likely mitigate high temperatures.