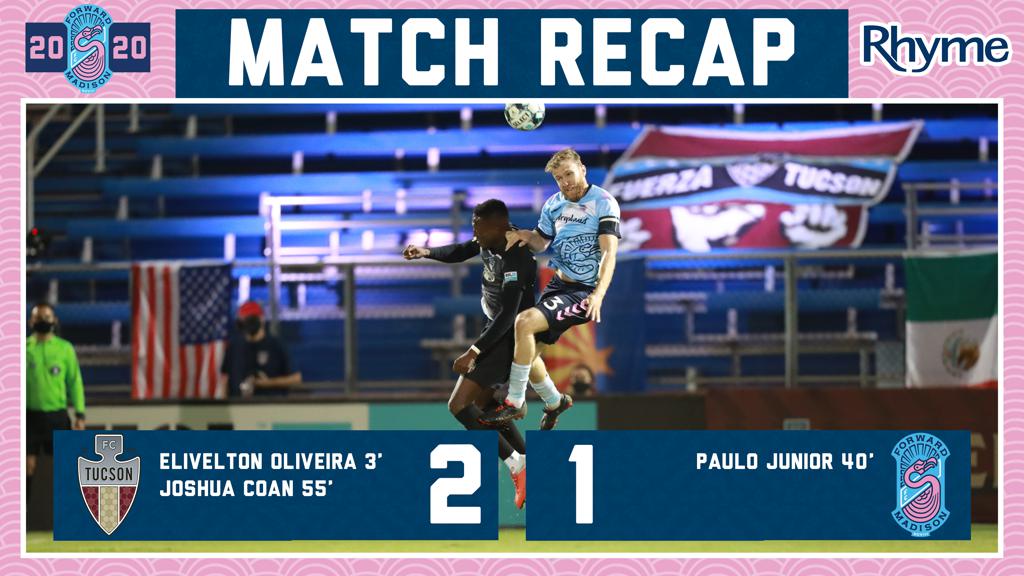 Forward Madison dominated the stat sheet but not the scoreboard Wednesday night, falling 2-1 to FC Tucson on the road. The Flamingos outshot Tucson 24-6, including 10 shots on target, but were sunk by early goals in both halves.

It didn’t take long for the home side to open the scoring, with Elivelton Oliveira giving the advantage to Tucson in just the third minute of play. Oliveira slotted past FMFC goalkeeper Philipp Marceta, angling a low shot at the far post.

From that point on, though, Forward Madison took the initiative. The Flamingos pushed numbers into the attack, registering an impressive 17 first-half shots.

Although it took a while, the Flamingos finally turned that momentum into a goal thanks to a strike from Paulo Júnior in the 40th minute. Paulo got his head to an inch-perfect cross from defender Josiah Trimmingham, heading home from close range to tie the game before halftime.

As the second half began, though, FC Tucson regained control. FMFC conceded for a second time in the 55th minute, with Joshua Coan rocketing a shot past Marceta to give his team the lead again.

Coan had in fact scored against Forward Madison before, registering a goal for Marquette University during the final game of the Flamingos’ 2019 preseason schedule.

From there, Forward’s firepower dissipated. Head Coach Daryl Shore turned to his bench, using all five substitutions in an ultimately fruitless effort to bring his team back into the game.

Some nights, the ball just doesn't bounce your way.