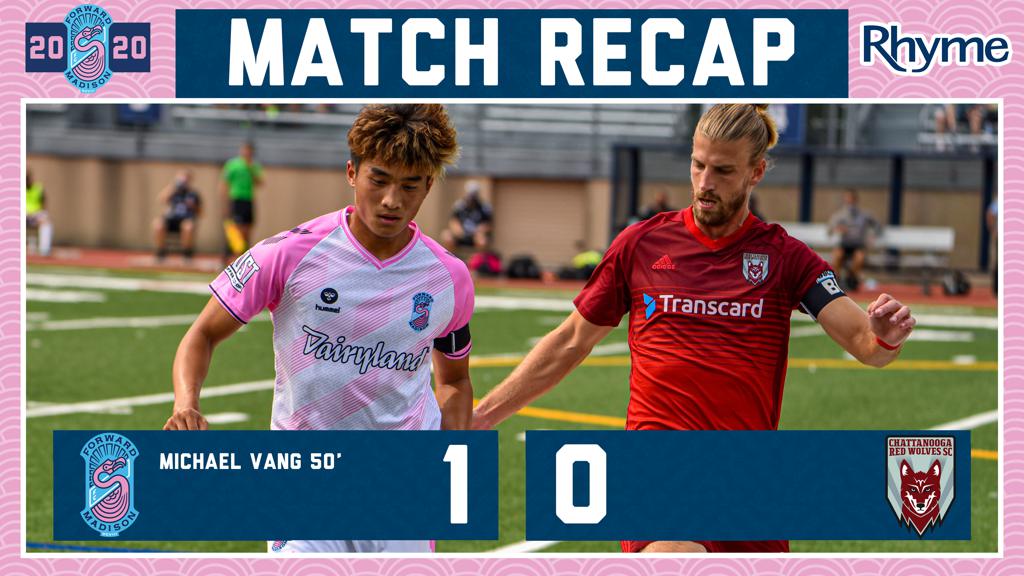 Vang, who now has three goals and two assists on the year, said the Flamingos are building momentum.

“This was a must-win game,” Vang said. “I think (we) had a setback with two straight losses, but we got ourselves together and we knew that coming into this game we had to be more urgent from the get-go. I think we really brought it today and sent a message out to the rest of the league.”

The first half didn’t hold much intrigue, but both teams still managed to generate chances in front of goal. Goalkeeper Chris Brady made three saves for the Flamingos, including a tidy double-stop in the 13th minute.

Forward Madison came close to scoring in the 22nd minute through Noah Fuson, who was making his first professional start. Fuson latched onto a backheel pass by Eric Leonard before forcing Red Wolves goalkeeper Alex Mangels into a sprawling stop.

Head Coach Daryl Shore switched things up at halftime, swapping out Fuson for regular striker Wojciech Wojcik. According to Shore, that substitution (as well as two more changes early in the second half) were planned in advance.

“Noah did exactly what we asked him to do,” Shore said. “I think there were some nerves that played into it, but I’m very pleased with how he handled the game. We obviously would have liked to see him get a few more chances running in behind, but for the most part we were pleased with how Noah did tonight.”

After the break, the Flamingos came out looking sharper and eventually got their goal through Vang in the 50th minute. Paulo Junior kicked off the play with a cross into the box, which Wojciech Wojik headed into goalkeeper Mangels before Vang pounced on the loose ball to give FMFC the lead.

“I just tried to follow up,” Vang said. He (the defender) tried to go for me instead of the ball and the ball was just sitting right there, so I just dodged him and hit it in the goal.”

The Red Wolves continued to push the point throughout the half, though, notably forcing Jiro Barriga Toyama into a last-ditch tackle to prevent what looked like a certain equalizer.

With the win, Forward Madison jumps to fifth in the standings, just above FC Tucson thanks to a greater goal differential. The Flamingos are still four points outside of League One’s second playoff spot.

Up next is a rematch of Wednesday’s game against FC Tucson, where the Flamingos fell 2-1 in Arizona. This time, though, Forward will play hosts, with kickoff at Hart Park set for 7 p.m. on Saturday, October 3.

For Shore, it could be a chance for the Flamingos to kick into high gear.

“We’re really excited to see Tucson again after the taste we have in our mouths,” Shore said. “They did what they had to do to win the game, so you can’t sit here and say that they didn’t deserve it, but I think our guys will be really happy to see them and play them Saturday.”