Flamingos outshoot Tucson to no avail, stay fifth in League One standings 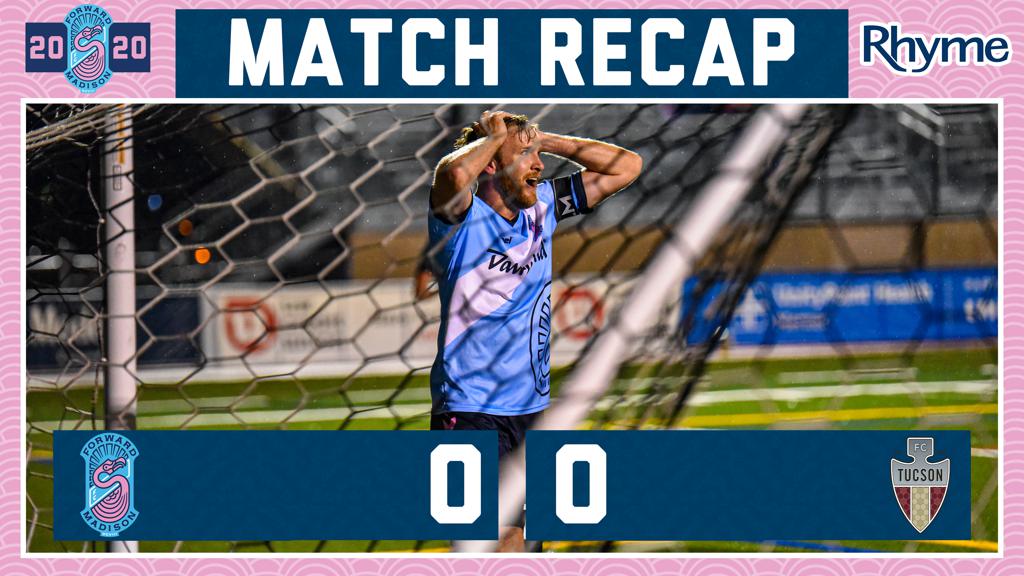 Forward Madison FC couldn’t find the breakthrough Saturday night, drawing 0-0 with FC Tucson at Hart Park. The Flamingos kept their undefeated home record intact, but failed to find victory in a result that leaves the team fifth in USL League One with five matches left to play.

In the end, though, none of those shots could salvage more than a point for FMFC. According to Head Coach Daryl Shore, his players deserved better than a draw.

Despite the result, the Flamingos still gained a point on playoff rivals Richmond Kickers, who lost to New England Revolution II. FMFC did lose ground on Union Omaha, as the Owls won their game against South Georgia Tormenta.

“We’ve got to hold serve at home and then we’ve got to go on the road and win one of two on the road, if not both,” Shore said. “We still have five games left, which is more than the other teams have, so it was better than not getting any points.”

Forward Madison came close several times during the first half, with a 25th minute shot from Josiah Trimmingham appearing chief among the chances. Trimmingham pushed up the pitch and rang the crossbar, nearly lifting the crowd to its feet with his long-range effort.

Tucson’s best opportunity may have come on a free kick from Charlie Dennis, which forced Connor Tobin into a dangerous header straight into the arms of his own goalkeeper, Chris Brady in the 42nd minute.

Brady, on loan from the Chicago Fire, recorded his second clean sheet in two straight starts.

“We felt like Chris has gotten his chance and he deserves to run with it,” Shore said. “He was good against Chattanooga, and tonight he wasn’t called on to do a lot of things but he was still solid. We have two good goalkeepers so each week we’ve got to make a tough decision.”

Forward Madison came close in the second half through striker Wojciech Wojcik, who nearly finished off a cross from Christian Diaz in the 82nd minute. The Flamingos only had one shot on target in the entire game, and it came during the waning minutes of stoppage time via substitute Jamael Cox.

According to team captain Connor Tobin, the Flamingos will have to keep their heads up to have any shot of making the playoffs.

“I think the energy of the group was good tonight,” Tobin said. “Guys are fighting and battling for each other.”

Forward Madison stays in fifth place with the draw, ahead of FC Tucson on goal differential, but still seven points behind second-place Union Omaha.

Following Saturday’s draw, FMFC will finish its three-game Hart Park homestand next Sunday when it plays host to Union Omaha on Oct. 11 at 4 p.m.

For Tobin, it’ll be a match the Flamingos can’t afford to lose.