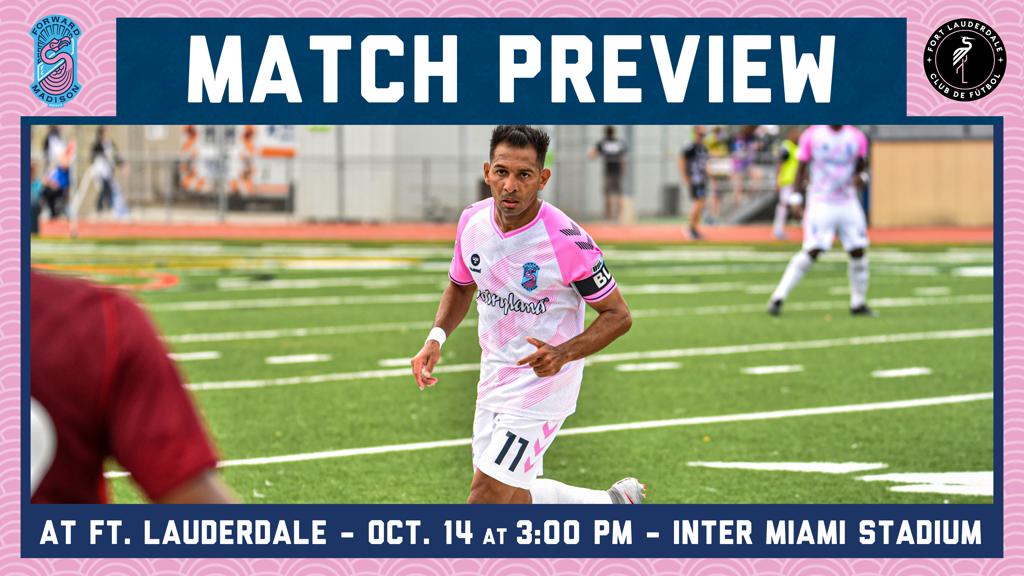 With time winding down on its sophomore season, Forward Madison will look to keep its postseason chances going when it visits Fort Lauderdale CF on Wednesday. With four games left to play, the Flamingos are still seven points away from a spot in the USL League One Final.

A loss or a draw wouldn’t eliminate Forward Madison mathematically, but it would certainly edge the team close to it. Victory is a near necessity.

If the Flamingos are to earn all three points, though, they’ll have to break out of a major scoring slump. Forward’s last two games have both ended 0-0, and Madison’s team hasn’t scored multiple goals in a game since Sept. 4.

In that case, it can’t hurt that Forward Madison is coming up against Fort Lauderdale CF, which has conceded 25 goals, the most in USL League One this season and five more than any other team. The Flamingos have never played against Fort Lauderdale, which launched this year as MLS club Inter Miami’s second team, but will have to make their first impression count.

Head Coach Daryl Shore will have some difficult decisions to make, with his players coming off just two days' rest since Sunday’s draw against FC Tucson. That game featured a lineup full of regular starters, although second-half substitutions meant not all of them played 90 minutes.

In any event, the Flamingos will likely rely on their defensive prowess to secure a result. FMFC has given up just two goals in its past five games, and has only conceded four goals in the eight games where Jiro Barriga Toyama, Christian Diaz, Connor Tobin, and Josiah Trimmingham have started together on the back line.

On the other side, Fort Lauderdale CF will be playing for little more than pride, having already been eliminated from contention for the USL League One Final. The team, which is coached by former MLS manager Jason Kreis - who worked with Paulo Junior at Real Salt Lake - sits 9th in the standings with two matches to play, and has lost three games in a row.

Fort Lauderdale’s attack is led by Ricky Lopez-Espin, a familiar face for Madison fans, who played for Lansing Ignite FC last year and has scored seven goals in 2020 - good for second-most in League One. Another name to look out for could be Jerome Kiesewetter, the former U.S. Men’s National Team player who is on loan at Fort Lauderdale from parent club Inter Miami.

Forward Madison still has four matches to play in the 2020 regular season. Following Wednesday’s game, the Flamingos will travel to Tennessee to take on Chattanooga Red Wolves on Saturday, Oct. 17 at noon C.T.