Late goals give Flamingos a point, but team slips further in postseason chase 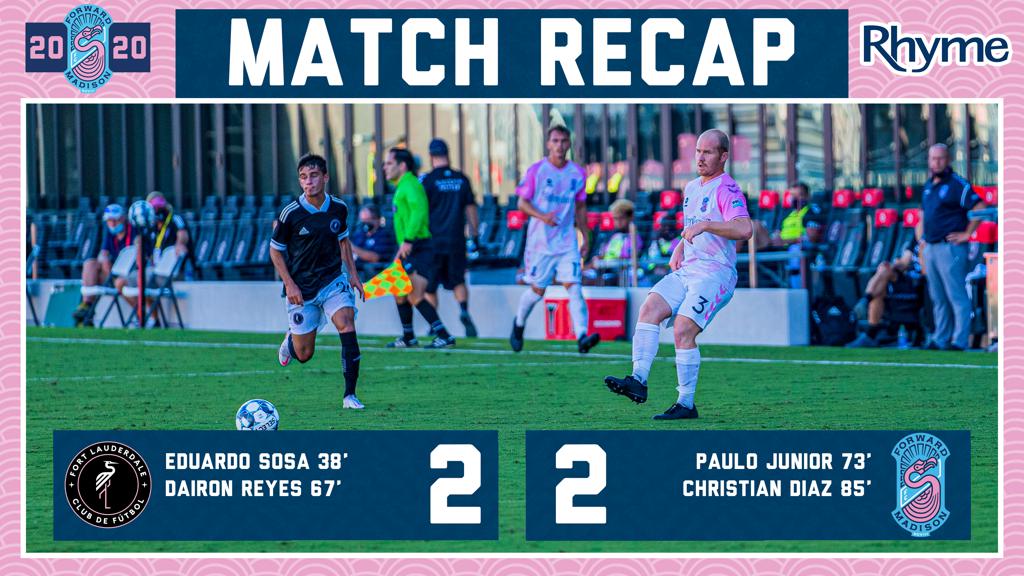 Forward Madison pulled off a late comeback to secure a point on the road Wednesday, drawing 2-2 at Fort Lauderdale CF. The Flamingos went down by two goals, but tallies from Paulo Júnior and Christian Diaz turned the game around in its waning minutes.

The draw means FMFC stays alive in its pursuit of a spot in the USL League One Final, but now sits six points out of the top two spots with three games to go.

Forward Madison took the initiative early, creating numerous chances on goal in the opening half. Noah Fuson, Paulo Júnior and Don Smart all came close to scoring within the first 20 minutes, but couldn’t quite find the target.

Instead, it was Fort Lauderdale that found the net first, taking a 1-0 lead through Eduardo Sosa in the 38th minute after pouncing on a loose ball in the Flamingos’ penalty area.

Head Coach Daryl Shore sought to change his team’s look in the second half, bringing on Christian Diaz in the 54th minute and moving Jiro Barriga Toyama up to the wing.

Just when the match looked over, though, Forward Madison came roaring back. Forward Paulo Júnior struck for the Flamingos in the 73rd minute, capitalizing on a mistake by the opposing goalkeeper to knock home a rebound.

The substitute Diaz then tied the game in the 85th minute, heading home from close range after Paulo’s initial shot was parried into the air.

Even at 2-2, though, the drama wasn’t over. Defender Connor Tobin earned a red card for a challenge just outside the Flamingos’ penalty area in the fourth minute of stoppage time, meaning he will miss FMFC’s next game.

Fort Lauderdale whiffed on the ensuing free kick, which in turn gave Forward Madison a chance to counter-attack. The Flamingos nearly won the game in its final moments only for their last attack to be undone by a very close offside call.

Following Wednesday’s game, Forward Madison will travel to Tennessee to take on Chattanooga Red Wolves on Saturday, Oct. 17 at noon C.T. The Flamingos are still eighth place in the League One table.