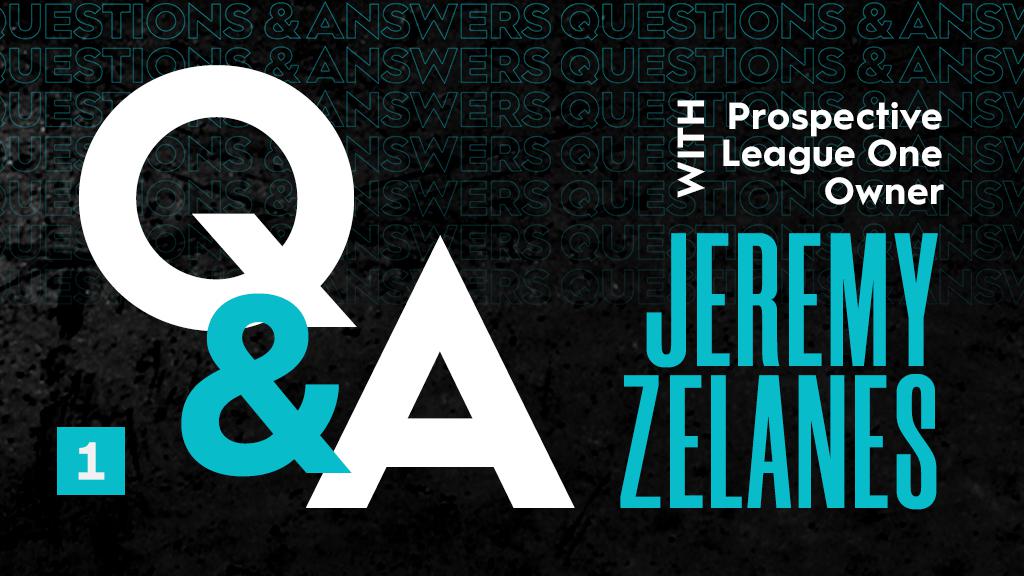 USL's Cameron Koubek sat down to speak with prospective League One owner Jeremy Zelanes. Below are excerpts of that interview, edited for brevity.

New Hampshire is not the first state that comes to mind when thinking of soccer hotbeds in the United States, but with a high number of youth players and a gap in the professional sports landscape, it could make a great home for a soccer club. That thought process drove Jeremy Zelanes, currently heading up a group working to bring professional soccer to the region, to begin building one.

A resident of New Hampshire for the last decade and the founder of an ambitious ownership group in The Granite State, Zelanes recently sat down to discuss soccer in the area and his goals for the project.

CK: Good to meet you Jeremy, albeit only two-dimensionally. Looking forward to learning more about this project!

JZ: Absolutely! Nice to meet you as well, and happy to answer any questions you might have.

CK: Sounds good! First up from me is a simple one: What makes New Hampshire a great spot for a professional soccer team? How would a club go about filling that gap in professional sports in the state?

JZ: Right now, we don’t have any professional soccer teams here. We have between 12,000 to 15,000 youth soccer players across the state, and with the closest team being the New England Revolution, I think it would really open things up to bring a team here.

CK: Where are you in the process of formally being awarded a League One franchise?

JZ: Right now, we’re working behind the scenes to bring this to life. We're not quite there yet, but we're getting closer every day and are hoping to be in a position to announce the club later this year with a few objectives to hit still. We couldn’t be more excited by the prospect though, and are eager to share some good news with fans in our community and around the country soon.

It’s impressive how fast soccer is growing in the United States. Considering the number of youth players that we actually have here in the U.S., the model and the Academy model with the USL just makes sense from a foundational standpoint. We would be able to get good players in urban communities to build a real pathway to professional soccer in New Hampshire.

CK: Building that pathway is one big way to connect a new club with its community. Can you speak a bit more on how you would plan to form that connection, both in terms of providing a platform for young players and in cultivating a matchday experience?

JZ: The most important thing for us is having a good location that is central to where a lot of the soccer community is. Londonderry is certainly top of the list because of the proximity to that community. With the space and stadium that we want to develop, we want to build into an entertainment district where people can not only come watch soccer, but have a full night out; come out to eat, have dinner, go to a game, and afterwards go out for drinks or take their family to another fun activity in the area.

In terms of actual soccer, we’re working on forming partnerships through local youth soccer affiliates and have already formed one partnership which we think would really help soccer in the urban market, especially. We’re looking at these affiliates from a grassroots level and working on growing right up into the academy.

CK: Switching gears a bit, in looking at other League One clubs who have launched recently, did any impress you in particular, and are there any aspects of other club launches you would want to adapt in your own process?

JZ: The one really nice thing is that since the word got out about us wanting to start a club here, a lot of the ownership within League One has reached out to me to offer their support and advice, which I think is amazing. Everyone is competing on the field, but in terms of getting what needs to be set up being put into motion, most of these people have been right where I’m at now within the last two or three years. It’s absolutely tremendous to have that kind of support not only from the league, but to have owners specifically and staff in the front office offering up support.

Forward Madison is obviously a pillar in League One and a good model going forward, but I think from what I’ve been able to pick up from conversations with other owners, everybody collectively has been able to offer something special about their own club that we could now consider and revamp in our own creative way to make it unique.

CK: Final question for you is that typical job interview one: if you were to fast forward five years from now, what would you like to be able to look back on and say you’ve accomplished during an ideal launch and first few seasons for a club?

JZ: I think the most important thing is community involvement. No club is anything without really strong, genuine community support. Having partnerships with local businesses, the local government, and more importantly, people in the community - that’s what is ultimately going to grow the club. We have a vision and we want to make sure that over the course of five years, our vision falls in line with what the people in the community want and that it is something they can all be proud of.

CK: Thanks for taking the time to speak with me! We’re all excited to see where this project goes in the coming months and years.