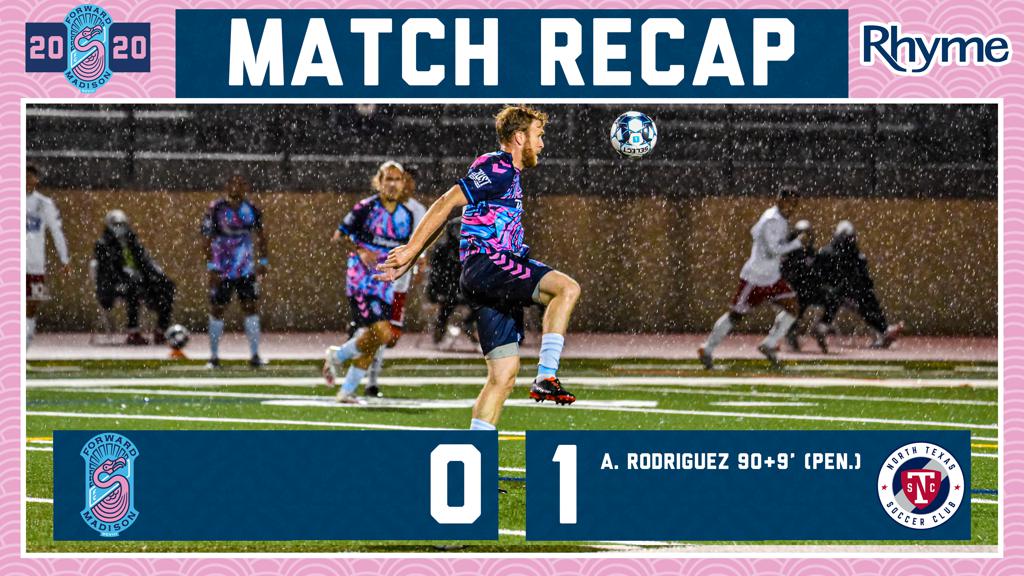 Forward Madison found itself on the end of a last-second defeat on Wednesday, falling 1-0 to North Texas SC at Hart Park. North Texas were awarded a controversial penalty kick in the final seconds, and sunk the Flamingos in the ninth minute of stoppage time.

“I’m proud of the way our guys played and battled,” Head Coach Daryl Shore said. “I’m disappointed for our guys because they played well. They tried hard.”

The first half began and ended with high pressure from North Texas, but a burst of rain in the middle made the Hart Park pitch slippery and resulted in more chances for the Flamingos, who logged shots through Wojciech Wojcik and Don Smart. On the other end, Arturo Rodriguez had a big chance from a free kick, but it was caught by Chris Brady in the 42nd minute.

Defender Gustavo Fernandes, who started at fullback, was forced off early after pulling a hamstring.

“When you have to make an early sub like that, it’s difficult,” Shore said. “We had a good start to the game. We had the game in the half of the field that we wanted it in, and yeah, you’ve just got to make those changes when those injuries happen.”

Brady again came up big for FMFC in the second half, stopping a hard shot from North Texas in the 76th minute. According to Brady, the Flamingos’ good defense represented a team effort.

“Throughout the whole game the main goal defensively was communication, keeping the boys in front of me, compact, organized and making sure they're in the right spots to make good plays,” Brady said. “Second half, yeah, they put us under more pressure, but we dealt with it well.”

In the end, though, it wasn’t to be for the Flamingos. Jiro Barriga Toyama fouled North Texas’ Rodriguez on the edge of the penalty area in the sixth minute of stoppage time. Although the referee initially awarded a free kick, the decision was changed to a penalty several minutes later.

Rodriguez took the chance, scoring the penalty and winning the game in the 99th minute.

“After how hard we fought, for something like that to happen just sucks,” Brady said. “We really wanted to get three points today and hopefully three points Saturday, but it just sucks because we put everything forward. For it to end like that is unfortunate.”

The Flamingos are already eliminated from contention for the USL League One Final and remain 9th place in the league standings.