Goals by Fuson, Jiro in final 10 minutes give Flamingos 2-1 win over Revolution II 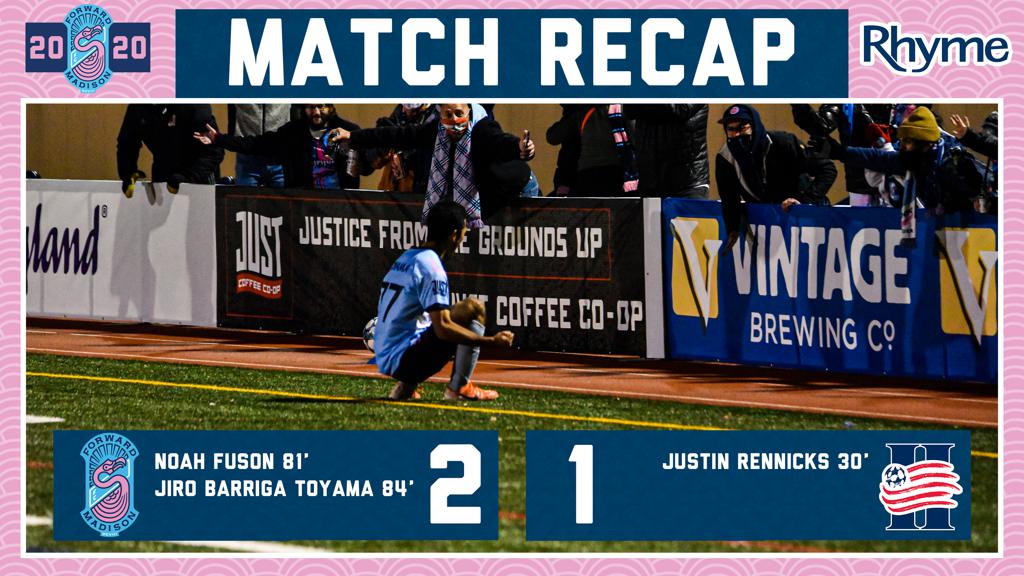 Forward Madison closed out its season in style on Saturday, defeating New England Revolution II thanks to a comeback 2-1 victory at Hart Park. Noah Fuson scored his first professional goal to equalize late on before Jiro Barriga Toyama struck from distance to clinch the game.

According to team captain Connor Tobin, it was a fitting end to a difficult year.

“We weren’t good for 75 minutes, but we finished the game with a bunch of guys that continued to work through adversity,” Tobin said. “It shows that we do have a group of guys in the locker room that are, I think, resilient. We’ve got to build on that as a group if we’re going to be successful.”

A back-and-forth first half went New England’s way after Justin Rennicks gave the visitors the lead by beating the offside trap before scoring in the 30th minute. Rennicks’ goal meant that Forward Madison Chris Brady finishes second in the race for the USL League One Golden Glove, just behind Greenville’s Dallas Jaye.

On the other end of the pitch Paulo Junior rang the bar on multiple occasions, but was unable to find the back of the net.

Head Coach Daryl Shore changed things up in the second half, bringing on Allan Rodriguez at halftime and Noah Fuson soon after the break. Shore also gave Madison native Carl Schneider his 2020 debut with a 79th minute substitution.

For much of the second half, though, it seemed no change would make a difference. But with the game nearly done and dusted, Forward Madison found a way back.

The first strike came in the 81st minute courtesy of Noah Fuson, marking the forward’s first professional goal. Fuson cut through the defensive line to receive a threaded ball from Louis Bennett, then smashed home with his right foot to tie the game.

For Fuson, it was a moment he’d waited his whole life for.

“It meant a lot to get my first one here in front of the fans in the last game of the season and help us get a 2-1 win,” Fuson said. “It feels really good to end the season on a highlight. It gives me a lot of motivation and just going into the offseason and into next season to continue to get better and score more goals.”

The winning goal came just three minutes later courtesy of Jiro Barriga Toyama, who scored from long range to put the Flamingos in the lead for good. Jiro found himself in space nearly 30 yards out from goal, then tore a rocket off the post and into the net for a spectacular finish for what may have been the game of the season.

The late victory brought Flamingo fans to their feet, and fans and players shared a moment after the game, singing “Oh, Madison” as the final whistle blew.

For Shore, though, this season’s end is just another beginning.

“Though it was a great finish to a tough season, for me personally I don’t think it was good enough,” Shore said. “We’ve got to figure out ways to get better, and hopefully we’ll have those opportunities to do that. Again, we showed what our character is all about and what we’re trying to build. The future for this club, once we get the city on board with us being able to do this the right way, I think the future is really bright for our club.”