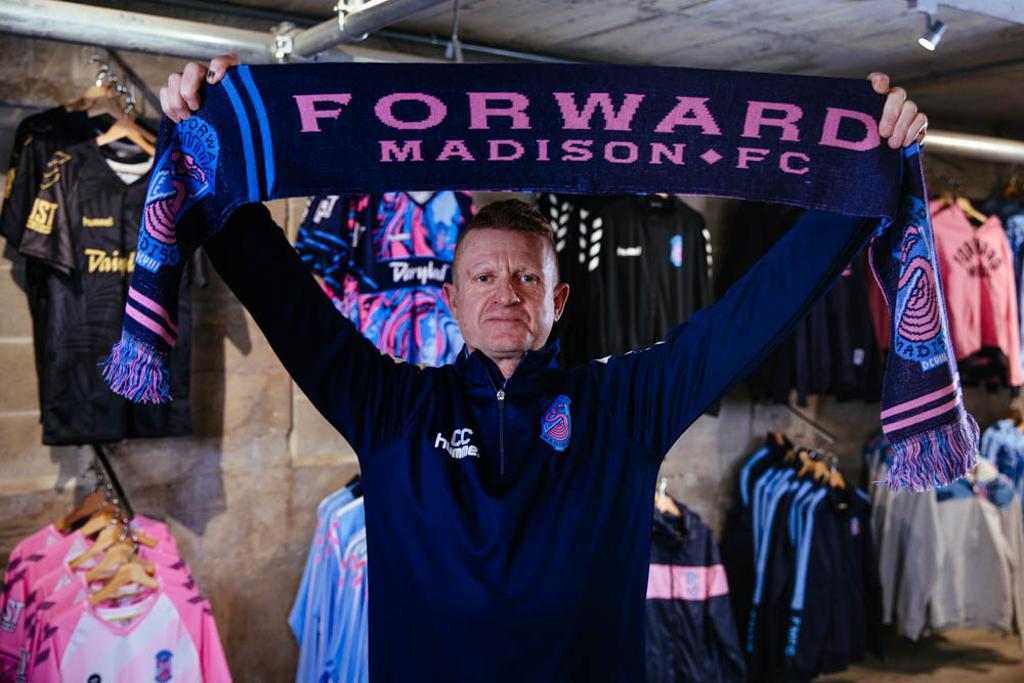 It’s now official: Carl Craig will be Forward Madison’s new Head Coach. To get a better feel for who he is, we sat down with Carl to ask him about why he chose Madison, what he loves about soccer, and how he sees FMFC developing under his tenure.

The following interview has been edited for length and clarity.

"Outstanding. Driving into the city today, it was like, ‘It's happening.’ So I'm feeling great."

I wanted to ask what your immediate thoughts are now that you are the new - I guess the title is Head Coach & Technical Director, right?

"There's certainly an element of excitement because (Assistant Coach) Neil Hlavaty and I have been chatting about footballers and that makes it real. I've already started working, frankly. I'm really excited about that."

Tell me a little bit about what you know about Forward Madison. From my perspective, it seems like one of the reasons this is a good fit is that this club has a very good supporters' culture, and you're a coach that really thrives in a supporters' culture.

"I think that the diversity and the eclectic mix of people who support the football team here was, frankly, the ultimate attraction for me to come here. I mean, I love coaching football and it's afforded me a space where I can just let go of stuff, but it's also been a huge vehicle for me to make connections with people. Having been somewhat aware of the diversity of the community here to where I can lose myself in the football and be here to help support a lovely, diverse, eclectic community - it sounded like a perfect situation to me.

"I know this community is vibrant. My wife's family is from Wisconsin - not from this area, but she's from up north - so I've got a sense of what Wisconsin's like, but this is actually only the third time I've been to Madison. I've heard it's an isthmus, which I think is Wisconsin for ‘Oasis.’"

You'll find out soon enough! While you may be new to Madison, though, you've been to Breese Stevens Field before, haven't you?

"I can't remember how long ago it was. Probably at least 15 years ago, I was coaching a team in the Twin Cities in the National Premier Soccer League. Jim Launder [now an assistant coach with Forward Madison] was the boss of the Madison 56ers and we played them here. It didn't look much like it does now, but I remember that wall around the side as well as the space that used to be the old dugouts and what have you.

"It was rough back then, but it was atmospheric. It was a Saturday evening, we got beat 3-1. I've been a colleague of Jim Launder's for quite some time. He was telling me while Forward Madison was starting up that they'd have this new stadium and I said, 'I think I've been there before!' Well, actually, yes I have.”

And now getting to see it in person...

"Oh yes, it's awesome. One of the first times I spoke with [Owner and COO] Conor Caloia, he sent the flyer for the job, if you will. It was a PDF and I opened it. We had a conversation a day or so later and I had it up on my computer screen. There was a shot with the state capitol building in it, and it started giving me little hairs on the back of my neck. I thought, 'I want to be there.' It was just so atmospheric. It was in the city, with the vista and so on. It was brilliant. I loved it.”

We're definitely keeping our fingers crossed that we can have that crowd again next year. Moving on, for our fans who don't know, you've got a really interesting history. You were once called the most interesting man in Minnesota sports. There have been articles detailing your past as an anarchist punk band member, a vegan restaurant owner. You've taken a long, winding path to come here, haven't you?

"Yes. I think I'm still that same fellow. All those things I did outside of football when I was younger are still close to me. I still listen to punk music, I still listen to anti-establishment lyrics, I still listen to reggae music and that sort of thing. But I think what I've really stayed connected to from being a young lad who was into all that stuff is the cooperative spirit. And that's the sense that I have about this football club, in particular the fan groups. That's something that really excites me.

“I was chatting with Connor Tobin earlier this year, and we were talking about cooperative work structures, et cetera, and of course we've worked in football together, but that would be the perfect football club model. Let's say, for instance, a local brewery serves the beer; a local bakery helps deliver food; all these different elements that are connected, we support one another. That interaction and cooperative spirit and sense of doing things together, it's not that we're relying on each other, it's that we're choosing to work together. For the betterment, yes, for us to provide a great work environment, but also - and this is so corny here - to create a good community. I believe in that. The football is the reason it gets us here, but it's the other stuff that goes around football which is really what it's all about."

Yeah, I think that's the ethos of Forward Madison. We want our supporters to feel like stakeholders - that the direction they want the club to go in is where it actually is going.

"You could be my scriptwriter. You took the words right out of my mouth. Absolutely. Stakeholders, steeped in what this is. That's what I want to be involved in, but that's also the kind of footballer that I want to attract. Something bigger than playing football. Footballers who, yes, will help us go forward and win, but also people who will embrace the community and that ethos as well.

“That is so important to me because that's the football club I've come to join and be a part of. We seek to give the fanbase a style of football that they appreciate, respect, and like, but we also want footballers who understand that as well. I am here to serve the football club and the community, and I think the players need to understand that we are here to serve the community as well."

That's a really good transition, because I wanted to segue to asking about your expectations for 2021. What do you think this offseason is going to look like for Forward Madison?

"It's going to be massively important. I will work to try to secure players who will fit both the ethos of the club and also the profile. We want to be a dynamic, protagonistic type of football team. We want to play on the front foot when possible. We've still got to look at the opponent, but the football players and the style of football we play, we want it to be as dynamic as this community.

What are your goals for this season? What expectations or benchmarks are you going to be setting?

"It's been put to me that it's expected that we are challenging for the championship. Given the support that the ownership group here is providing in terms of financial resources, I don't think that's uncalled for. That's where the club should be. Let me say this: I want footballers to win the championship here at Madison and show us that they've served us to their utmost. We have a purpose here, and that is to be a core and essential part of this community. My job is to help lead this football club on the field and off the field.

“That being said, we’ve also got to look at the players as individuals and see what their expectations are. I want this to be a place where players can grow, develop, flourish, and really love their life, being here in this community. But I also understand that if they start hitting the dizzy heights, then people, maybe MLS, will start knocking on the door. That will show me that we've done our job in that regard, in terms of development. And then we start again. We want this to be a place that players want to come to. They want to learn, they want to grow, they want to support the community.”

I only have time for one more question, so I want to leave it with this: What message do you have right now for Forward Madison's supporters?

"I'm one of you. I'm here to support you. I'm here to do the utmost to provide you with a football team that represents the whole state of Wisconsin and the city of Madison. I want you to be able to walk around throughout this nation with your Forward Madison shirt on and people will know who you are and where you're from."

Thank you, Carl. We're so excited to have you.