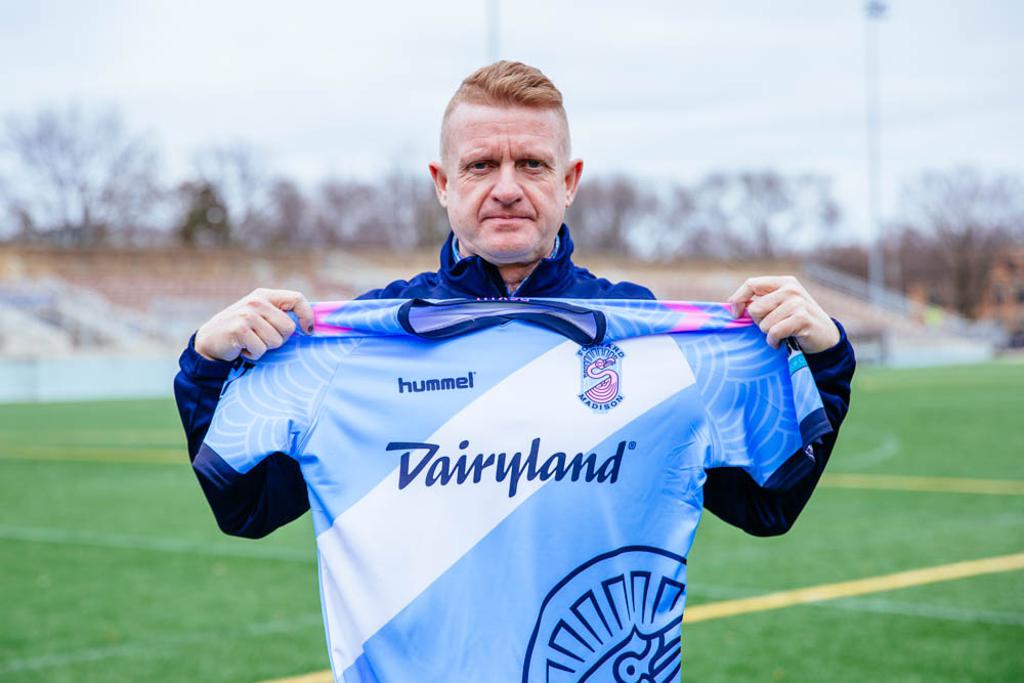 It’s finally official: Forward Madison’s new head coach will be Carl Craig, a manager known both for his aggressive tactics on the field and his eccentric personality off it. But who exactly is Carl Craig? We’re here to give you the rundown…

Carl Craig isn’t your traditional soccer manager. Yes, he may be from Newcastle - one of England’s great footballing hotbeds - but his route to Forward Madison has been far from ordinary.

Craig grew up playing youth soccer for Newcastle United, but dropped off due to injuries and focused his attention towards his home life, which, as he recounted to the Saint Paul Pioneer Press in 2016, wasn’t always stable. Instead, Craig found passions in punk rock and veganism, delivering newspapers on the side to get by.

“All those things I did outside of football when I was younger are still close to me,” Craig said in an interview with Forward Madison. “I still listen to punk music, I still listen to anti-establishment lyrics, I still listen to reggae music and that sort of thing. But I think what I've really stayed connected to from being a young lad who was into all that stuff is the cooperative spirit.”

Still, Craig eventually parted with his punk bands (The Abductors and Reality Control), and his dream of becoming a vegan restauranteur never had enough money to get off the ground. Instead, he was left with soccer. Craig started earning coaching badges, working his way into positions with the English Football Association as well as Newcastle United’s academy. During that time, he built a reputation as a gifted mentor, helping to train players such as longtime Manchester United star Michael Carrick.

In 1994, though, Craig took his talents across the Atlantic, following the World Cup to the United States. Craig landed in Minnesota, where he first earned coaching jobs at high schools in suburban Minneapolis-Saint Paul before moving on to the U.S. Soccer’s Development Academy program at Shattuck St. Mary’s boarding school (current Flamingo midfielder Michael Vang is an alumnus).

Along the way, Craig served as head coach for semi-professional teams in the National Premier Soccer League (NPSL) and the USL Premier Development League (now USL League 2), once visiting Breese Stevens Field for a game against the Madison 56ers. And by the time the Minnesota Stars emerged as the state’s only professional soccer club in 2010, Craig had become enough of a known entity that he was hired as an assistant coach.

While coaching the Stars, Craig gained an identity as an idiosyncratic personality, developing deep connections with supporters and earning trust with his players by discarding soccer convention. He famously introduced Britpop anthem “Wonderwall” to the team as a victory song; While the Stars have now rebranded to Minnesota United and play in Major League Soccer, its fans carry on the tradition of belting out the tune after each home win.

During Craig’s tenure as an assistant, the Stars (and later United) won the North American Soccer League championship in 2011, came runners-up in 2012, and earned the league’s best regular season record in 2014. Off the field, Craig won the hearts of the team’s fans, starring in comedic skits and bonding with supporters over post-match pints.

In honor of Carl Craig as being named coach of @ForwardMSNFC I give you Saint Craig as he appears behind the bar at @BlackHartSTP https://t.co/0dUM0Ybpj1 pic.twitter.com/40gaQZN6Av

Craig took the reigns as head coach of Minnesota United in 2016, guiding the team through its final year before the move to MLS. When the club declined to keep him on board after its transition to the top flight, Craig receded to less-visible roles in the Minnesota youth coaching scene. A 2019 profile in The Athletic painted him as a sort of Odyssean lost hero, a man who disappeared into the wilderness at the height of his notoriety.

Yet with Forward Madison FC, Craig is finally returning to the professional game. While the roads he’s had to walk may have been winding, they have ultimately led Craig to a team that shares his philosophy of both life and soccer. In speaking about why he wanted to manage the Flamingos, Craig cited the same principle that has guided his entire existence: Finding a sense of purpose in community.

“The diversity and the eclectic mix of people who support the football team here was, frankly, the ultimate attraction for me,” Craig said. “My wife's family is from Wisconsin, so I've got a sense of what it’s like, but this is actually only the third time I've been to Madison. I've heard it's an isthmus, which I think is Wisconsin for ‘Oasis.’"