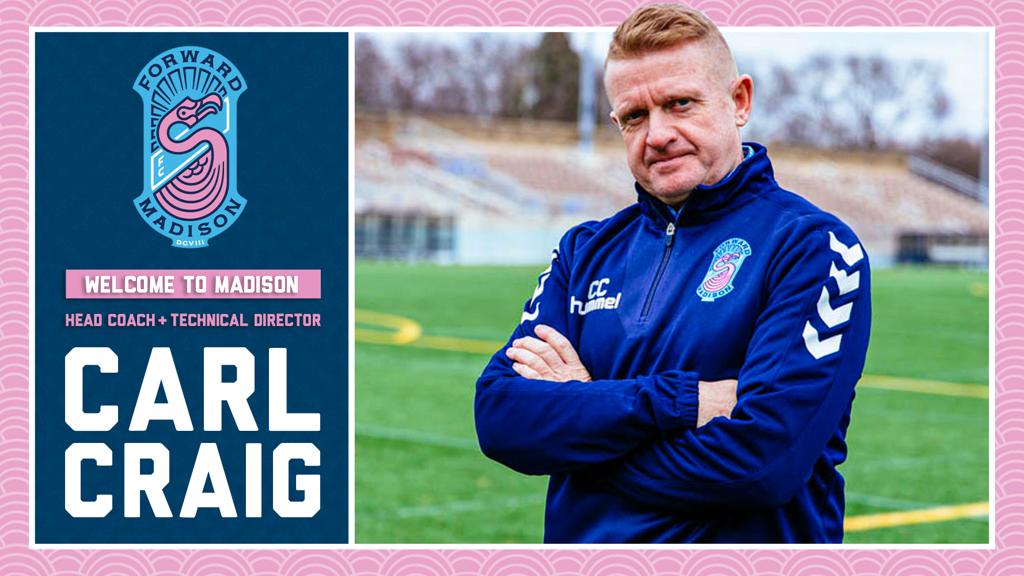 Forward Madison FC has hired Carl Craig as Head Coach & Technical Director, the club announced Tuesday. Craig, who has over 30 years of coaching experience in both the youth and professional ranks, managed Minnesota United FC in 2016 before the team moved to Major League Soccer.

According to Chief Operating Officer and Owner Conor Caloia, who led the search for a head coach, Craig can win on the field and cultivate a relationship with supporters off it.

“After a thorough search, it became clear to our ownership group, our staff and our supporters that there was one person that fit the culture and community of Forward Madison FC,” Caloia said. “We share a vision for this Club on and off the field. We are excited to welcome Carl to Madison and look forward to one day celebrating a USL League One championship together.”

Craig, 55, is no ordinary manager. An Englishman who was once described by the Guardian as a “lapsed punk musician, former bike messenger and one-time aspiring vegan restaurant owner,” Craig emphasized that Forward Madison’s connection to its community will create a successful culture.

“The diversity and the eclectic mix of people who support the football team here was, frankly, the ultimate attraction for me,” Craig said. “Football can create a good community. I believe in that. The football is the reason it gets us here, but it's the other stuff that goes around football which is really what it's all about."

Craig began his coaching career early on, working with youth players for his hometown Newcastle United. He moved to Minnesota in 1994, where he established himself in the local youth soccer scene.

Craig got his chance to shine in the professional ranks in 2010, when he was named assistant manager for the North American Soccer League’s Minnesota Stars. Craig’s Stars (which soon rebranded into Minnesota United FC) won the NASL championship in 2011, came runners-up in 2012 and had the NASL’s best regular season record in 2014.

Craig became head coach of Minnesota United in 2016, the team’s final year before moving to MLS. During his time with the Loons, Craig became a beloved figure with the team’s fans, introducing the “Wonderwall” tradition that takes place after Minnesota’s home wins and developing a reputation as the most interesting man in Minnesota sports.

Since Minnesota United’s transition to MLS, Craig has returned to youth coaching, most recently as the Technical Director of Salvo Soccer Club in Eagan, Minnesota.

As he settles into his new role, though, Craig said he knows where expectations lie. For him, the end goal is to win a championship with a team Madison can be proud of.

“With the football players and the style of football we play, we want it to be as dynamic as this community,” Craig said. “We want to find those guys. But just as important as that, we have to have people who believe in what we're doing. It's not just coming to play football here because we've got a big crowd; it's coming to play football here to be part of something bigger than football."

READ: "Our football needs to be as dynamic as our community" | Q&A with Carl Craig