Read what our new head coach had to say in last week's 'Ask Me Anything' session! 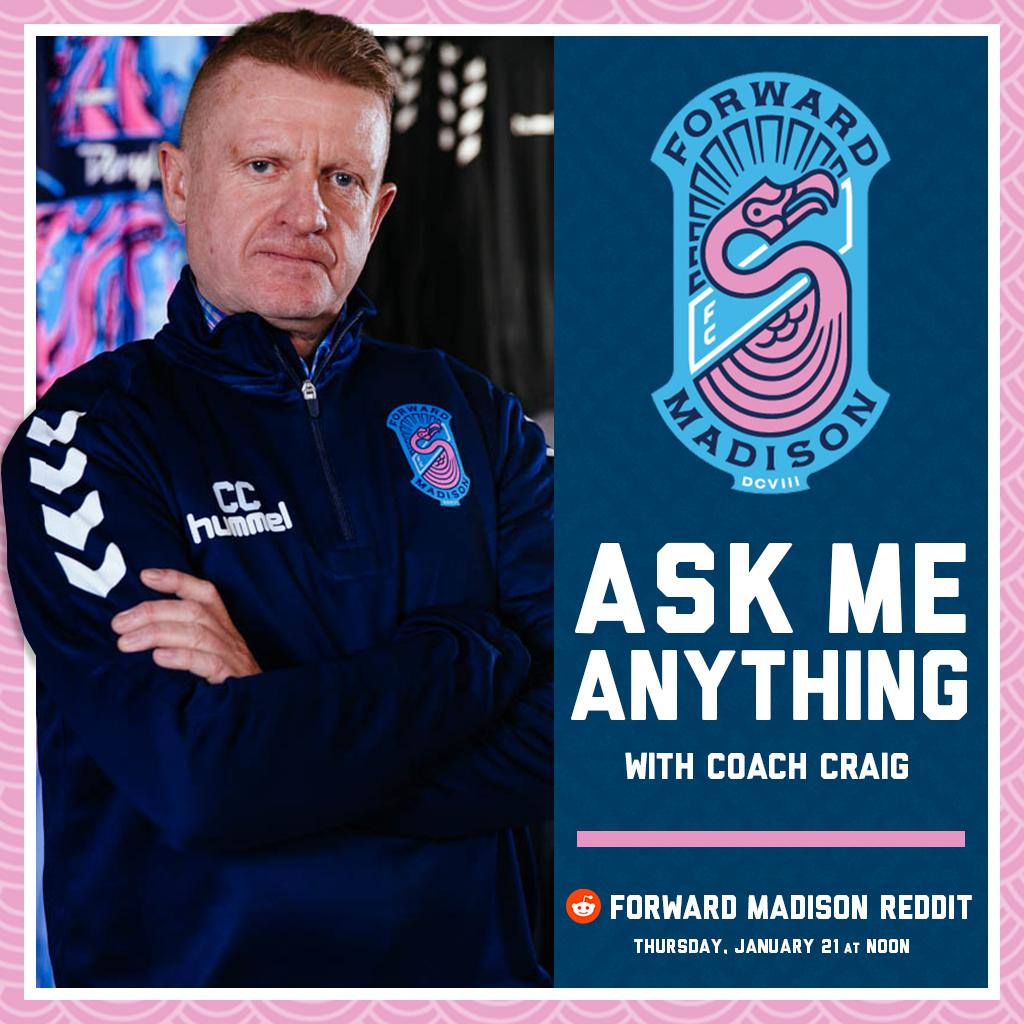 Forward Madison head coach Carl Craig took time out of his Thursday last week to participate in an "Ask Me Anything" session on the Forward Madison subreddit, answering any question our supporters were willing to ask. We've compiled some of the best responses here for your reading pleasure.

How do you plan to incorporate the technical skill of both him and Michael Vang into our offensive formations?

Carl Craig: Well, thank you for the welcome. I appreciate that. I think, just in watching the videos of last year and connecting it with the basic setup of the football team - the team was set up so defensively last year, which resulted in not scoring many goals. I'd like Jiro to push forward more and get into the attack.

Jiro, for me, fits the profile of an attacking forward, but also has a defensive mindset. Not just the qualities, but the mindset. What I'm looking for in the #11 position is another Michael Vang, if you will. In the past, an 11 would be seen as a winger. In the old days, when I was a young player, you'd call it an inside forward. Playing higher up the field. Jiro has to be part of that, where he can support the attack in those outside left positions as well as doing the defensive work.

/u/ApocalypseQ: When you're starting your yearly Football Manager career, which club do you choose and why is it FMFC?

CC: I've only played it once! I played it back with a Commodore computer, I think in the early 80s it would've been, with a cassette to load the game up. Like a lot of you people who play that, I sat from 10 in the morning to 10 at night playing it.

I was Newcastle United, I won the league. Who else would I be? Whilst I was playing, Newcastle was playing QPR [edit: in real life!]. They drew 5-5, it was an absolute stormer of a game and I missed it!

I just played the game, I didn't have to have these bloody, hey pay me all your wages and stuff. When I was with Minnesota I purchased it. When I see all these add-ons, I said enough's enough, but I wanted to use it for scouting. I loved it way back then, but I don't have the time for it these days!

/u/CoyLoon: Are you going to bring back Tea Time with Carl Craig?? If not, what’s a video series you’d like to do with the Mingos?

CC: No Tea Time! Not in the form it used to be, at least. I don't think it's appropriate for a wide audience. I think it was fun at the time, and it was the vibe the club wanted to give off, but I don't necessarily know if it helped me!

I'm open to suggestions provided it's not all effin and jeffin... That wasn't necessarily me being me. It's not that I don't swear, but they really wanted me to swear! That was part of the schtick.

/u/tygor: Favorite punk band or album? Do you listen to any modern punk or just the classics?

CC: Funny you say that, when I go into my Spotify I'm a bit of a goth! I'm probably too fat and too ginger to be a real goth. I couldn't pull off that mop. During Christmastime I was texting with a friend in England, and they played Machine Gun Etiquette by The Damned. That's an album that I still really like.

The modern stuff, I don't know that it's necessarily punk stuff. The more recent stuff that I've been listening to, it's more Nick Cave-y stuff. I listen to more indie bands these days, Dandy Warhols, Black Angels, that kind of stuff. I like a bit of everything! That's such a cliched statement, isn't it?

/u/zo0o0ot: Are we expecting any difference in formations given our upcoming chance in offensive philosophy? Presumably, the talent we sign will have some part in determining that.

CC: The plan is to build towards a 4-3-3. Based on how I've seen it implemented last year, there'll definitely be differences. It's easy to say we'll be gung-ho and score a million goals, but we'll have to be balanced. Based on what I've seen from last year and who we're trying to sign, we should be much more attacking. There was a greater emphasis on attack, and I want us to be much more forward thinking. Based on the profile of the players we're looking to sign, it's based on their ability to attack.

/u/HaveAHumanExperience: Hi! What's your vegan story? Such as when did you switch, have any favorite foods, did punk music get you into veganism (since there's a huge overlap between the metal/punk scene and veganism), still vegan? Do you talk about wfpb nutrition with your players to improve performance?

CC: No, I'm not a vegan anymore, but yes, I was part of the punk rock/anarchist movement that got into veganism and animal rights and that sort of thing. I became sick, I got a burst stomach ulcer and started to bring dairy back into my diet.

Funnily enough, me pals, it was four of us, we shared a flat and were all vegan. We took turns cooking for each other. Dining out wasn't an option, one because we couldn't afford it, but two, because there was no vegan food. We were looking to open up a restaurant - we wanted to promote a healthy lifestyle through eating health food, not pills and potions.

Over the holidays here, I made seitan the old fashioned way and it was rubbish. I really like tofu, but this notion that it takes on the flavor of whatever you cook it with, that's a load of rubbish. It tastes like tofu, and I like that!

When I started my vegan diet lifestyle, I was 16 years old, I was eating Indian and Italian food because I could get recipe books and I didn't have to change the recipe too much. It was lovely and flavorful, and omitting cheese was easy from the Italian part.

/u/danielmickphoto: Hey Carl, Not so much a question, but more of a thank you. Thanks to you playing bass in a Clash cover band at Brits, I made a friend at the bar that night who then went on to introduce me to my wife (set up the blind date). Excited to see your Mingo's play whenever it's safe for fans to return.

CC: Maybe there was too much brown ale flowing on those nights, because I never actually played in those cover bands!! I was asked to do the presentation of an award on a couple of occasions by Newcastle Brown Ale, because Brits was selling more Brown Ale than any other pub in the world. I wasn't actually the bassist, but I wish I was! Happy days!

Or maybe I was, and I was so well served I can't remember...

/u/Freefallisfun: Hi Carl. What’s your opinion on the lack of promotion/relegation in the states? Is it simply a case of too few teams?

CC: No, I don't think it's too few teams. I think it's down to the investment from the ownership groups. People in this country are not used to having the bottom fall out, if you will. It's, I've invested in this and I want some security.

I think there's a way of doing it. You could do it in the USL, where there's a trapdoor from the Championship to League One. I think it would make the competition more attractive. It might require a bit of education, but I think there'd be excitement in the end of the competition in the playoffs. I think from a national perspective there would be value in promotion and relegation, but there's worry about investment and maintaining a crowd base.

/u/lord_of_vader: Hi Carl, bloody legend! Is it true that you tattooed yourself as a kid? If so, what is it of? Are gellied eels gross?

CC: Yes, it's true unfortunately!! It's just a smiley face on my knee. I don't think it's worth talking about, but it keeps coming up!

Gellied eels? Probably, never had them! I'm a Geordie, not a Cockney!

/u/tsn_03: What is it like to have created a lasting tradition for so many MNUFC fans [with 'Wonderwall']?

I don't know, it just is! In all honesty, I think it's great, but it's there's now. It's not my football club anymore, and even though I still have a great connection with a bunch of the old Dark Cloud fans, it's there's. It's about the football team, trying to build the spirit in the community and the togetherness, and that's what we were doing back then and what they're still doing now.

The great thing about songs is that when you sing songs about meaning, they bypass critical faculties of the conscious mind. You subliminally, if you will, get past that barrier. Even the most stubborn people tend to open up, and that's the beauty of song. You fall into them, you create your own meaning.

It happened organically in Minnesota, and that's the important part. I'm not going to go out of my way to do anything like that in Madison, but we'll see what happens!

/u/TheDirewolfShaggydog: How has the culture shift been from living in Minnesota ,which is a state with terrible cheese and beer, and then transitioning to Wisconsin which has similar cold but superior beer and cheese?

Utopian! I haven't moved in yet, but I'm looking forward to it.

A few years ago, my wife, son, and I had a long weekend trip in Wisconsin. We went around to various little places and I remember the Carr Valley Creamery, which I think is somewhere near Madison. We had the matured cheddar, it was absolutely awesome. I think it was 10 or 12 years old or something like that? It has that crystallized quality to it, and it was so sharp as well - absolutely outstanding.

I'm looking forward to great cheese and great beer. Like I said in another reply, you just need to sit me down at a bar with a good Geordie session beer and I'll be good to go.