Molloy, Fernandes, Keegan and Gebhard find the net in vintage victory for Flamingos 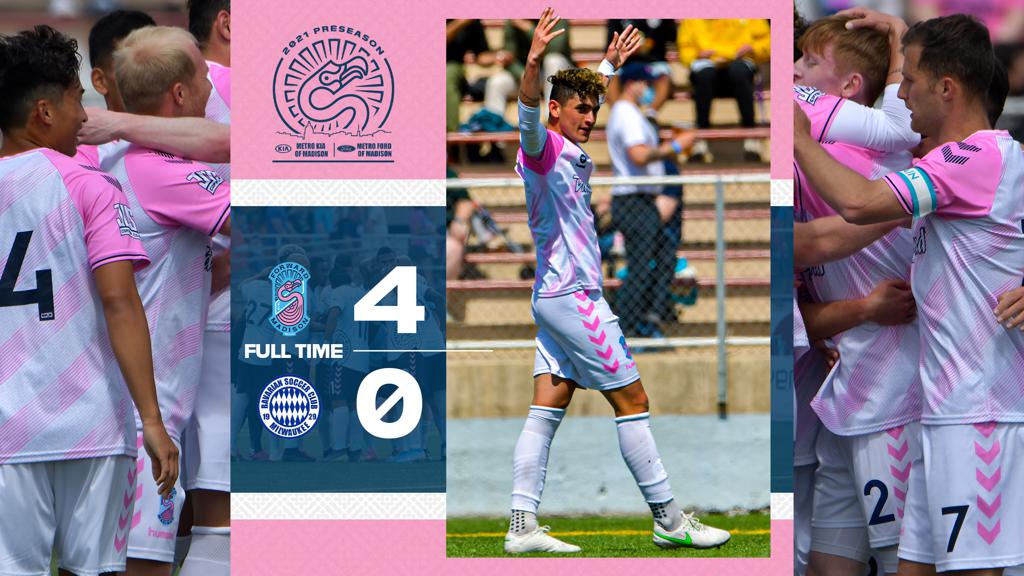 Forward Madison found joy in its return to Breese Stevens, winning 4-0 over Milwaukee Bavarians SC in its final preseason game. Saturday’s game was the Flamingos’ first match in Madison since 2019, and the return was made even sweeter by a true bevy of goals.

“There were some very good moments," head coach Carl Craig said. "I experimented a little in the first half and it didn’t quite go to plan, so we went and made a few adjustments at halftime. Our shape was better, our structure was better and obviously we played better football.”

After dominating the possession early in the match, midfielder Aaron Molloy opened the scoring with a low drive to the far post in the 12th minute off an assist from Tyler Allen. Despite only arriving in Madison last week, the Irishman was very effective, spending the half searching for space in the middle and finding himself in the center of the box and open for the shot.

"I was told great things about Breese Stevens (Field), so to get a goal on my debut was fantastic," Molloy said. "A big part of it was the fans. They made it even better for us, made the four-nil even sweeter that it was for them.”

Soon after, defender Gustavo Fernandes doubled the lead in the 24th minute with a diving header courtesy of Michael Vang’s out-swinging corner. Aside from Bavarians’ Logan Andryk striking the post in the 31st minute, most of the action was one-way in favor of the Flamingos.

The second half began with better play from the Bavarian visitors, but it was striker Jake Keegan who stole the show in the 70th minute. After taking on Audi Jepson’s feed, Keegan cut onto his right foot and curled home a strike to the far post from the edge of the box.

Derek Gebhard grabbed the fourth in the 79th minute after getting fouled inside the box and stepping up to calmly slot home his penalty attempt.

Forward Madison opens their USL League One Season on May 8 at FC Tucson before making its long-awaited regular season return to Breese Stevens Field on May 15 against North Carolina FC.