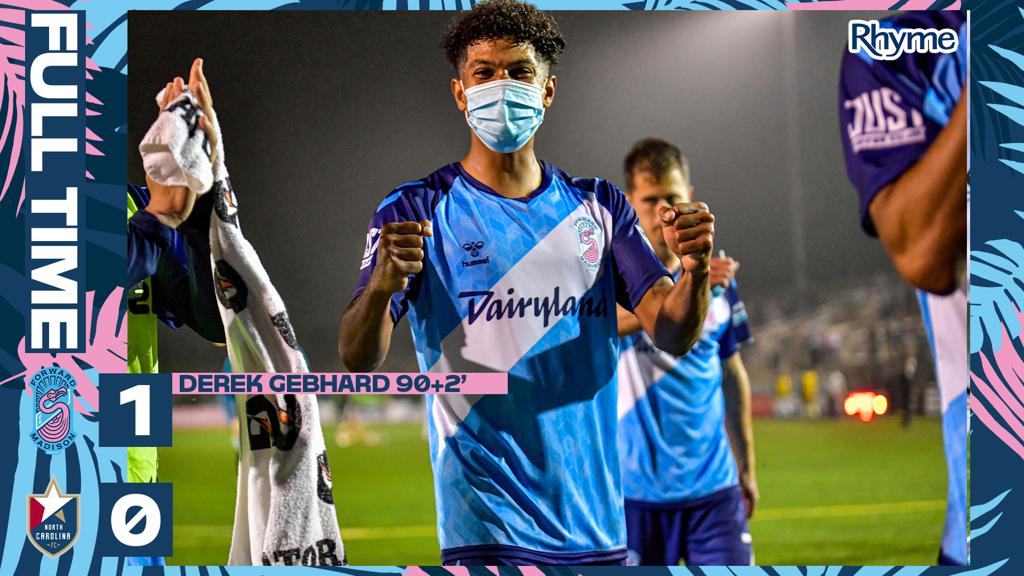 Forward Madison made its return to Breese Stevens Field in spectacular fashion Saturday night, scoring a last-minute winner courtesy of Derek Gebhard to secure a 1-0 victory against North Carolina FC. The Flamingos battled all game, but saved their best for last through Gebhard’s emotional stoppage-time goal.

“It was awesome, and to think this isn’t even full capacity and how excited everybody got, it was really an amazing feeling,” Gebhard said. “I can’t wait to come back here again and experience that with even more people.”

The first half was one-way traffic for the Flamingos as the fans roared them on in their regular season return to Breese Stevens Field, the first game the team had played in Madison in 601 days. Carl Craig’s men only managed two shots on target, though, through defenders Connor Tobin and Ronaldo Lomeli.

The captain Tobin expressed the emotion of the return to Breese Stevens Field after the team spent last year playing home games in Wauwatosa.

The second half was a quiet affair until Gebhard stole the show with a goal in the 92nd minute by tapping in Jake Keegan’s deflected shot. Gebhard played an active game all night and was rewarded for his efforts with a simple finish.

Gebhard’s goal unleashed pure euphoria inside the stadium, securing a much-anticipated win that many Forward Madison supporters had waited well over a year for.

“I’ve been saying all through preseason that Derek’s a fellow to watch,” head coach Carl Craig said. “That kid’s got to be over the moon. What a lovely fellow, unassuming, just quietly goes about his business, and for him to get the winner like that is outstanding.”

Forward Madison will remain at home for the next 11 days before hosting Union Omaha in the Owls’ first visit to Breese Stevens Field on May 26. After that, a two-game road trip will see the ‘Mingos face South Georgia Tormenta FC and Fort Lauderdale CF on May 29 and June 1.