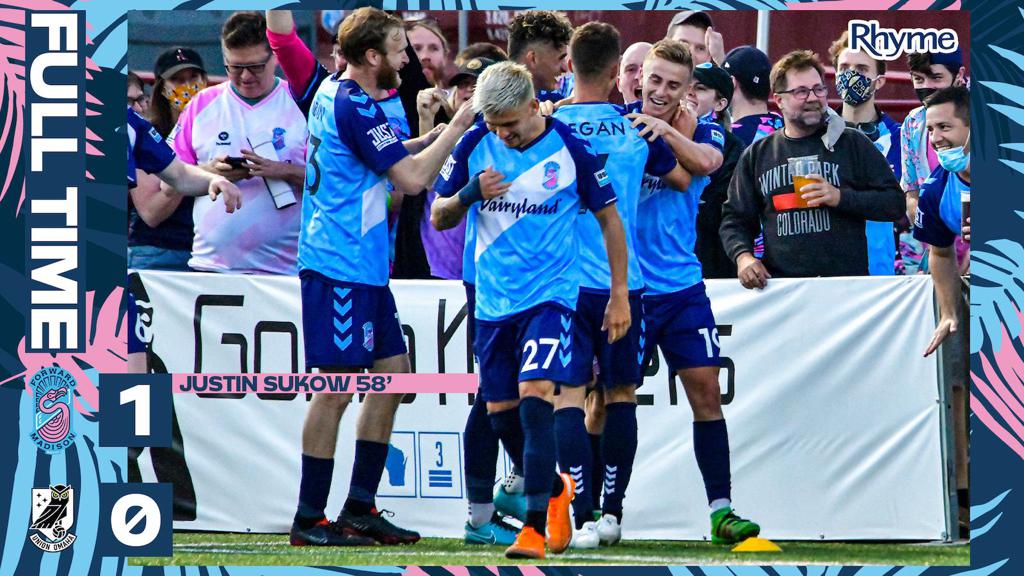 Forward Madison scored its second straight victory Wednesday night, defeating Union Omaha 1-0 thanks to Justin Sukow’s first professional goal. Sukow struck in the second half, keeping his composure in a one-on-one chance to give the Flamingos the win.

“Honestly I don’t know [what to say],” Sukow said. “I’ve scored goals before in club, high school and college, but scoring in front of The Flock, that was one of the best feelings in my life. I'll never forget it.”

While the visiting Owls took control of possession from kickoff, it was the Flamingos who spent most of the first half on the front foot. Aaron Molloy provided many of the highlights of the opening period as he took at least five different chances from set pieces and open play. On the other side, Union Omaha only generated a couple of shots that forced FMFC goalkeeper Phil Breno to leave his feet.

The second half went straight in favor of the ‘Mingos as Sukow, making his first professional start, scored in the 58th minute. With help from midfielder Audi Jepson’s through ball, Sukow found himself with a free chance in front of the goal and calmly slotted home to the far post.

It was Jepson who painted an apt picture of the game, summing up his contribution to the goal and highlighting Sukow’s efforts.

A late flurry of attempts came from Union Omaha, but a series of expert stops from Phil Breno and some timely offside calls kept Forward Madison’s net empty for the home clean sheet.

Forward Madison has now secured seven points in its first three games, its best start to a season yet. According to head coach Carl Craig, the Flamingos’ hard work has paid dividends in the team’s results.

“There’s confidence,” Craig said. “There are odd moments in every game, but I think there’s a great product. There’s a great camaraderie. This team has strengthened from last year. We went at [Omaha] and we won, and you can work with that.”

Up next for Forward Madison is a two-game road trip to South Georgia Tormenta on May 29 and Ft. Lauderdale CF on June 1. The Flamingos will then return to Breese Stevens Field on Sunday, June 6 for a rematch with Union Omaha.