Connor Tobin named USL League One Player of the Week

Tobin joins Diaz, Molloy, Sukow on Team of the Week for Matchday 8 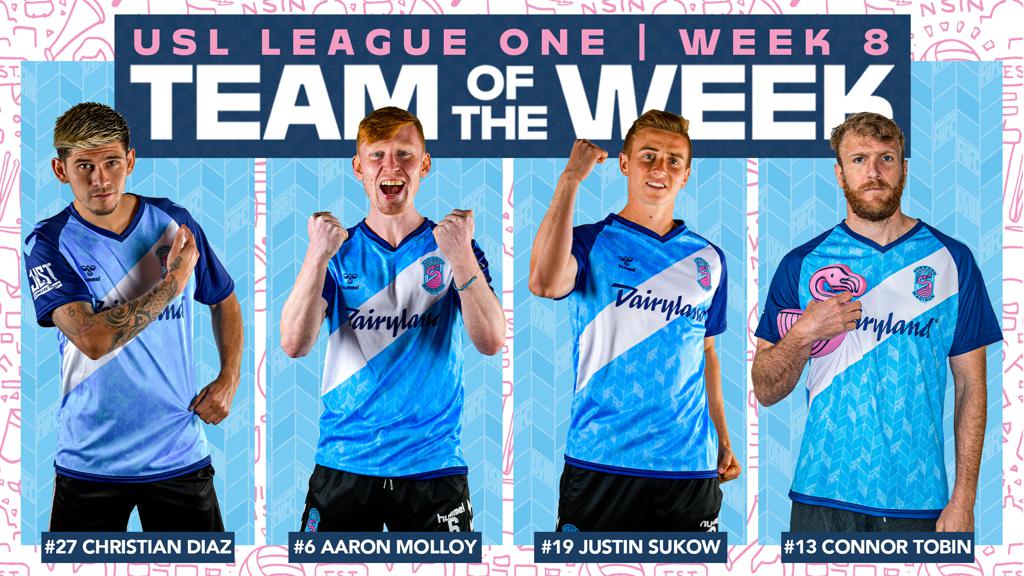 USL League One announced on Monday the Team of the Week for Week 8 of the 2021 regular season, with Forward Madison FC defender Connor Tobin named Player of the Week after scoring his side’s game-winning goal against South Georgia Tormenta FC and contributing to a clean sheet in a notable victory against Union Omaha.

Tobin played an integral role as Madison moved into second place in the League One standings with a pair of victories. In Wednesday’s win over Union Omaha, he won five duels and made three clearances as the Flamingos became the first team to defeat los Buhos this season. The 34-year-old center back then captained the side to a comeback win against Tormenta, powering in a header from a corner kick and winning 6 of his 8 duels on the night.

D - Christian Diaz, Forward Madison FC: Diaz was excellent in Madison’s win over Omaha on Wednesday, winning two tackles and 7 of 9 duels while making four interceptions. He followed that up with another solid outing against Tormenta, winning six duels and making three clearances.

M - Justin Sukow, Forward Madison FC: Sukow scored Madison’s winner against Omaha in his first professional start, and assisted Jake Keegan for the Flamingos’ third goal against Tormenta. His assist to Keegan was one of four chances he created in Saturday’s contest, the most of any player.

D - Connor Tobin, Forward Madison FC: Tobin has been at the heart of Madison’s three-game winning streak, having played every minute of the team’s 2021 campaign so far. His defensive play, as well as his first goal of the year on Saturday, are big reasons why the Flamingos have conceded only two goals in four games and have risen to second place in the table.