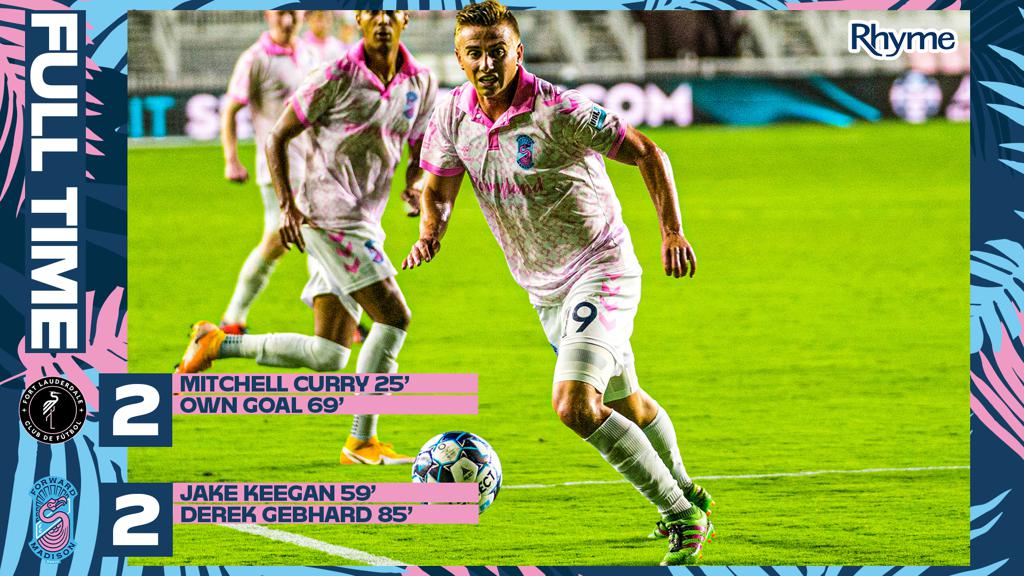 Forward Madison FC came back twice in the second half of its road trip finale on Tuesday to earn a 2-2 draw against Fort Lauderdale CF. Derek Gebhard equalized in dramatic fashion, curling home an 85th minute goal to save the Flamingos from their first defeat of the season.

Tuesday’s game was the Flamingos’ third in six days, and despite several changes to the starting lineup by head coach Carl Craig (including Noah Fuson’s first start of the season), the team’s fatigue showed in the first half. Fort Lauderdale got the scoring started early thanks to Mitchell Curry, who struck on a counter-attack in the 25th minute.

The Flamingos had orchestrated a comeback from a similar position in their previous match (a 3-1 win over South Georgia Tormenta), and have only scored second half goals in their five games thus far.

True to form, FMFC responded in the latter period of the game when captain Jake Keegan tied the match in the 59th minute. Midfielder Aaron Molloy split the defense wide open with a well-timed through ball, and Keegan shot to the bottom right corner to tally his third goal of the season.

The even scoreline was short-lived, however, as Fort Lauderdale benefitted from a deflected ball to score an own goal off Christian Diaz in the 69th minute.

Just as it looked like the Flamingos were out of the running, forward Derek Gebhard re-tied the game with a stunning shot from the right side of the box in the 85th minute. Gebhard took control of a pass from Audi Jepson with a deft right-footed touch before cutting inside onto his left and striking a curling effort into the top corner of the net.

Gebhard’s late goal, although scored in a very different manner, was reminiscent of his game-winner in the 92nd minute of Forward Madison’s home opener against North Carolina FC on May 15.

Thanks to Tuesday’s result, Forward Madison holds onto its second place spot in the league standings. Following the draw, the Flamingos will have a chance to rest up before returning to Breese Stevens Field on Sunday for a rematch against Union Omaha.