Early own goal dooms Forward Madison to first defeat of 2021

Despite first half goal from Keegan, Flamingos fall 2-1 to Union Omaha 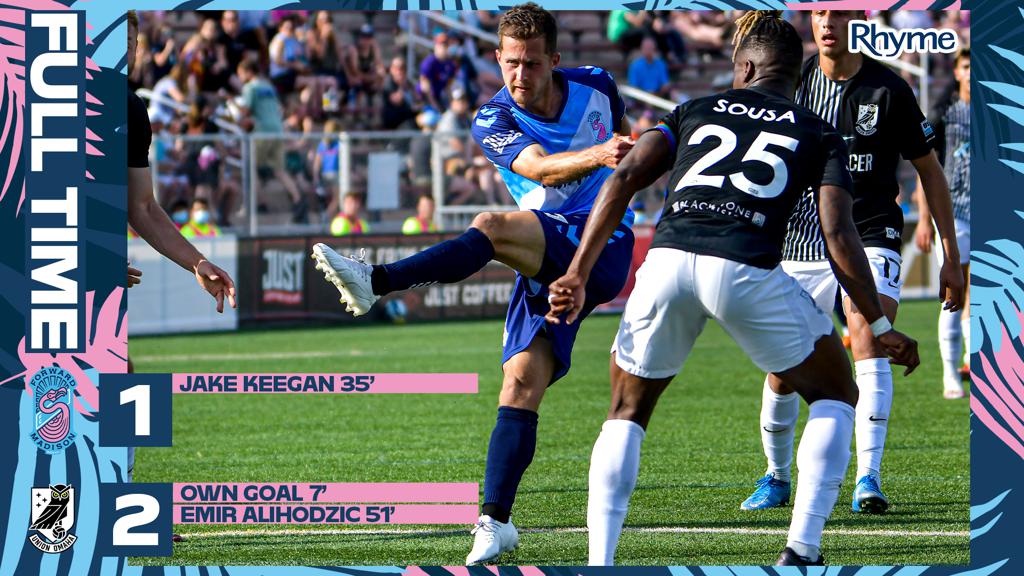 Forward Madison FC fell for the first time in 2021 on Sunday, dropping a 2-1 contest against Union Omaha at Breese Stevens Field. Jake Keegan scored his team-leading fourth goal of the season in the first half, but it wasn’t enough to deny the Owls, who are now first place in USL League One.

“We’ve got a long way to go,” head coach Carl Craig said after the game. We’ve got a full week to get rested, that’s one of the key things at this point. There’s some heavy legs in there.”

Union Omaha opened the scoring in the 7th minute when an own goal was deflected in off Forward Madison’s Tyler Allen. A cross from the Owls’ Nicolas Firmino on the left wing was first parried by Audi Jepson, then bounced off Allen and past a helpless Phil Breno in goal.

Jake Keegan equalized in the 35th minute for the Flamingos, the team’s first goal it has scored in a first half of a game this season. The move started when midfielder Justin Sukow took advantage of a turnover and passed the ball to Keegan, who still had work to do before scoring with a hard strike from the edge of the 18-yard box.

Keegan now leads the Flamingos in goals with four tallies in six games, equalling the top mark set by Michael Vang in 2020.

“If you’re a striker and you’re scoring goals, it’s always a good feeling,” Keegan said. “I think the way we play really suits me and I think I’ve gotten good service. Luckily this was the first time I actually scored at Breese, so that was a good feeling, but it’s always tough when it happens in a loss.”

The second half began with better play from Forward Madison, but Omaha’s Alihodzic re-routed a header past a diving Phil Breno in the 51st minute to give the Owls the lead for good. Devin Boyce provided a cross the right wing and Breno got a hand on the ball, but wasn’t able to push the ball around the post on a full-length stretch.

Head Coach Carl Craig sounded a conciliatory note about his team’s performance, but emphasized the team needed to be ready to go again next week.

“I thought we looked leggy in the midfield,” Craig said. “Too often we receive it and we send it back rather than going forward. I’m probably more disappointed with that than anything, because we weren’t as much of a threat.”

With the tight loss, Forward Madison falls to fourth place on 11 points while Union Omaha goes top on 14 points. That leaves the Flamingos one point above their next opponent, the Richmond Kickers, heading into FMFC’s next match on Saturday June 12 at Breese Stevens Field.